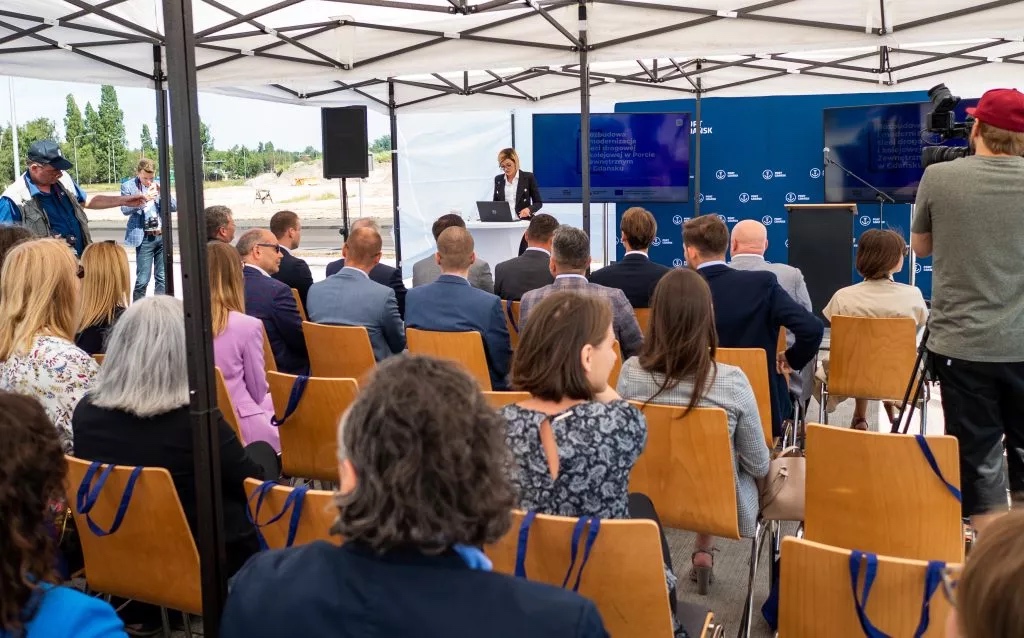 Seaports, Shipping, Logistics
The Port of Gdańsk, by extending the access infrastructure from the land, raises service standards, increases competitiveness and strengthens its position in the Baltic Sea

The conference summarising the implementation of the key road and railway investment in the Port of Gdańsk, took place on 28th June in the newly built buffer car park for lorries. It was attended by the Port of Gdańsk Authority, parliamentarians, representatives of the Ministry of Funds and Regional Policy, the European Climate, Infrastructure and Environment Executive Agency (CINEA) and the Centre for EU Transport Projects (CUPT).

There have not been such large investments in the Port of Gdańsk since the late 1970s. Within the framework of the recently completed project, 85% co-financed by the European Union from the CEF (“Connecting Europe Facility”) instrument, entitled “Expansion and modernisation of the road and railway network in the External Port”, 7.2 km of roads, 10 km of new tracks and 16 turnouts were built or reconstructed. The streets rebuilt were: Portowa, Poinca, Kontenerowa and Budowniczych Portu Północnego. 4 new viaducts were built and 2 existing ones were demolished (including one over active railway tracks and another over the PERN, LOTOS and Naftoport fuel transfer pipe complex). An additional track to DCT Gdańsk (the largest container terminal on the Baltic Sea), new tracks to coal terminals and a modern rail traffic control system were constructed. A buffer car park for lorries – the first in this part of the port – was also built. The general contractor was NDI from Sopot. The value of the investment was PLN 168 million.

Marcin Horała, MP, Secretary of State at the Ministry of Infrastructure, emphasised the importance of sea ports for the country. “At one time, the main source of income for the Republic of Poland was grain trade, which was carried out through the port of Gdańsk. Today, in order to grow, we need to offer advanced services, and for this we need modern infrastructure and well-connected sea ports. Gdańsk, Gdynia, Szczecin-Świnoujście, the three biggest Polish ports, have been developing rapidly in recent years, increasing their cargo handling capacity and breaking new records. A well-run maritime economy and well-managed ports may be the source of billions of Euro for the state budget and the development of the economy. Investment in transport infrastructure throughout Poland, including seaports, is one of the government’s priorities. These undertakings create measurable benefits, they are not a goal in themselves.”

Łukasz Greinke, president of the Port of Gdańsk, speaking about the port’s development strategy, mentioned that parallel investments in infrastructure, which have a significant impact on the growth of cargo handling, are also conducted by partners (DCT terminal extends the railway siding), as well as public institutions. The PKP Polskie Linie Kolejowe company, under the supervision of the Ministry of Infrastructure, is implementing a project named “Improvement of railway access infrastructure to the port of Gdańsk”. Thanks to this investment, a significant part of the cargo will be transferred from roads to rails. Over 70 km of tracks will be rebuilt, 13 railway-road crossings and pedestrian crossings will be constructed and 221 turnouts will be replaced. 3 bridges, 2 viaducts and 18 passes will be modernised. The project also includes electrification by replacing the existing catenary network over a total length of more than 80 km. In turn, the Maritime Office in Gdynia is modernising the access infrastructure on the water side – widening and deepening the port fairways, building new breakwaters.

“We want to be the number one port on the Baltic Sea in terms of total cargo handling – this is our number one goal. I realise that this will not be an easy task, but I am sure that in a dozen or so years, we will manage to achieve this goal. All the more so as we are already the leader on the Baltic Sea, although only in container handling. The infrastructure we are commissioning today will undoubtedly contribute to increasing the potential and handling capacity of our port. All operations will run more efficiently and safety will also be improved, as road and rail traffic have been separated. This is another step towards becoming the largest hub, not only for containers, but for cargo handling in the Baltic Sea in general. Further investments, which will be carried out in the inland part of Poland, will contribute to the Port of Gdańsk becoming the first-choice port for 590 goods”, said the president Łukasz Greinke.

The investment in the Port of Gdańsk, which has just been completed, is a completely new road system, which enables collision-free vehicle traffic, which is extremely important in the case of such a high intensity of cargo traffic. The only place from the exit of the DCT terminal where you have to slow down is the gate on the A1 motorway.

“Every road and railway investment will serve the development of the ports. The stream of goods that flows to and from the port needs a transport network. This is why we are happy with each newly built road or rail section, especially the north-south connections”, said Dariusz Drelich, Pomeranian Voivode. “The complementarity of all of these road and rail investments across the country contributes to the growth of the potential of our ports to become the largest ports on the Baltic Sea.”

Kacper Płażyński, MP and deputy chairman of the Commission for Maritime Economy and Inland Navigation, also spoke about the influence of road and railway investments on the development of the country’s economy. “Such a scale of investment has not been seen in the Port of Gdańsk for several decades. Poland has clearly defined its ambitions regarding sea ports. This is reflected in the investments in access infrastructure. The Polish government and ZMPG are very effective in raising funds. I am very glad that here, in my city, we managed to create a world-class industrial and logistics hub”, he said at the conference.

Paweł Buc, deputy director of the Infrastructure Programmes Department of the Ministry of Funds and Regional Policy, admitted that this investment is one of the first under the CEF that has been completed. “The project was carried out according to schedule, all possible funds were properly used, and the goal of increasing the port’s potential was achieved. I hope that we will soon meet to summarise another important undertaking co-financed by the Connecting Europe Facility.”

Modernisation of quays and deepening of the waterway in the Inner Port will be soon completed. Further investments in quays as well as in road and railway infrastructure are planned which will allow the investment to exceed PLN 1 billion.

The Port of Gdańsk Authority is aware of the dynamic market changes that result in the evolving role of ports. They are no longer just communication hubs connecting sea and land transport, but also key links in global supply chains, generating added value. Ports are nowadays catalysts for economic development, both regionally and nationally.

The Port of Gdańsk today is the third port on the Baltic Sea and ranks first in the handling of containers. It is the fastest-growing European port of the last decade and ranks 18th in Europe when summarised for 2020.