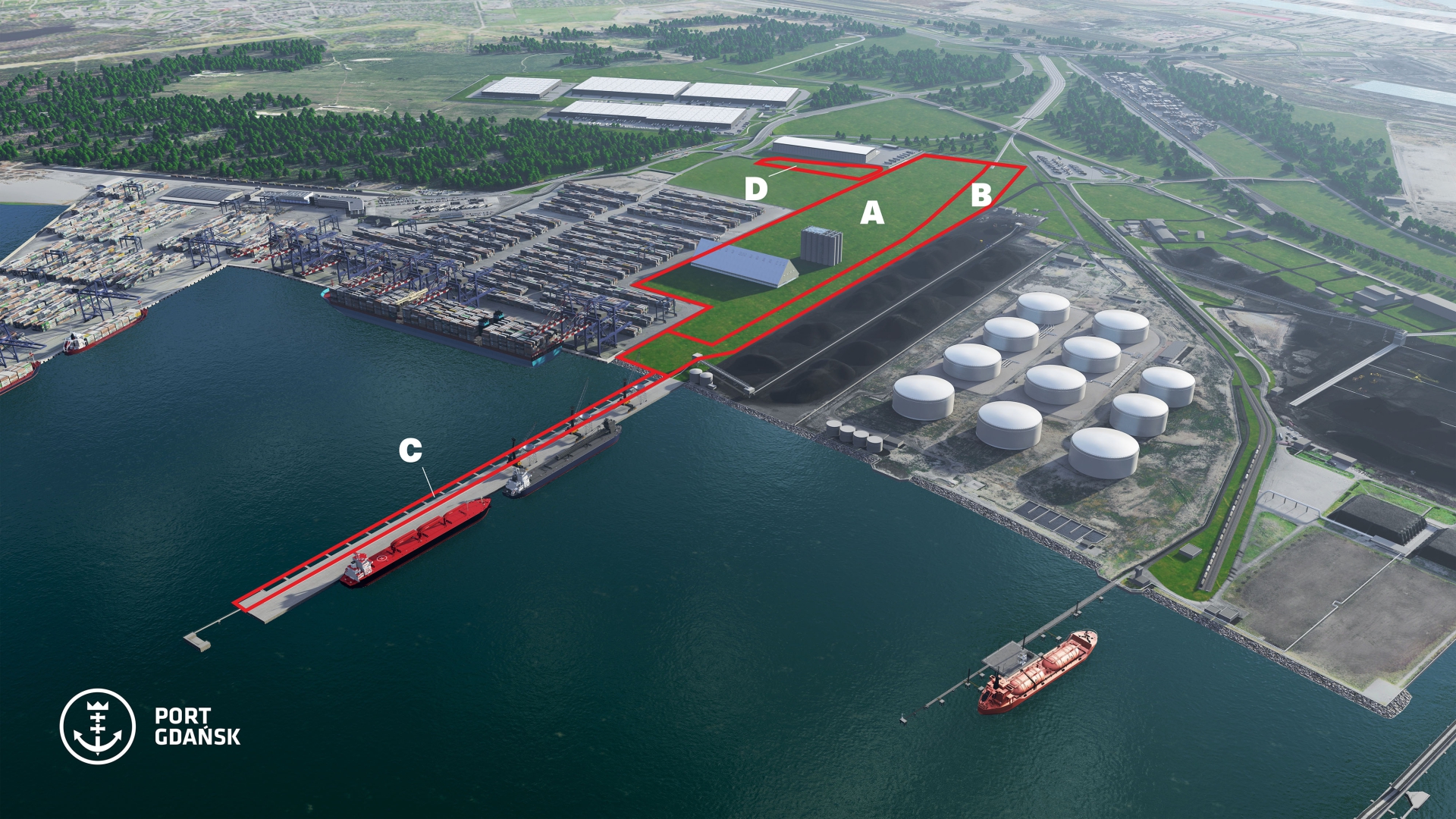 Seaports, Shipping, Logistics
The Port of Gdansk has announced tender for investment areas at the Ore Pier in the Northern Port

The Port of Gdansk invites you to locate your business on a property unique on a European scale, located in the deepwater part of the port. Port of Gdansk Authority S.A. announced a tender for long-term lease of developed land with a total area of over 27 ha. The site is located directly at the Ore Pier in the Northern Port. It can be used to build a terminal that would generate significant amounts of cargo. What kind? It's up to the market to decide.

The property has great potential. Its location, unique on a European scale, at the deepwater part of the Port of Gdansk, combined with investments, both on the land and water side, carried out by PGA S.A., PKP PLK and the Gdynia Maritime Office, is a guarantee of success for the business located there. The area is covered by a valid building permit, which includes a railway track, parking lot, roads and hydrotechnical infrastructure for mooring ships. According to the local spatial development plan, the property is intended for production and service development. The condition for joining the tender is the payment of a bid bond in the amount of PLN 1 million. Offers should be submitted by December 1, 2021 to the address of the Port of Gdansk Authority S.A. ul. Zamknięta 18.

An undoubted advantage of the property is its excellent communication, both from the water and the land. PGA S.A. does not spare funds for investments. In the middle of the year, the modernization of the internal communication system located in the Outer Port was completed, the purpose of which was to bring rail and car traffic to deep-water transshipment terminals. A total of 7.2 km of roads, 10 km of new tracks, including the access track to the property in question, as well as 4 bridges and 3 culverts have been built or rebuilt. Investments at the port's gates are also carried out by other entities. Another investment, which is to contribute to increasing the railway capacity, will be finalized soon. The project called "Improvement of the railway infrastructure for access to the Port of Gdańsk" is carried out by PKP Polskie Linie Kolejowe. Over 70 km of tracks, 13 rail-road crossings and pedestrian crossings have been reconstructed, and 221 turnouts will be replaced. 3 bridges, 2 viaducts and 18 culverts will be modernized. The Maritime Office in Gdynia has already taken care of improving access from the sea to this part of the port. In December 2019, Office completed the investment "Modernization of the fairway to the Northern Port
in Gdansk". The world's largest dredger was involved in the dredging work on the track reconstruction. Now the approach track to the North Port is wider by 250 m, and the technical depth is 18 m (i.e. increased by 1 m). A new turntable will ensure safe entry of ships into the port - its dimensions are equally impressive: the diameter is 750 m and the depth is 17.5 m. This enables two-way navigation of vessels, including those with larger parameters, which previously could not simultaneously enter and leave this part of the port. Another milestone in the development of access from the water side was the completion of the construction of external breakwaters, which took place in September this year. Over 1.6 km of new infrastructure was added to the existing breakwater system and the parameters of the existing island breakwater were increased. This investment not only covers the eastern part of the external port, but after the completion of dredging works on the designed fairways and turntables, along with the appropriate placement of navigation markings, it will constitute an additional route for the entry and exit of ships.

All these investments are crucial for the port business. They are to increase the competitiveness of the port and participation in transshipments in the Baltic Sea. - Our task is to create opportunities and we do so. If the area is tidy, well-developed and communicated, there will be an investor. At the Port of Gdansk, we still have about 120 ha on which investments can be implemented - explains Łukasz Greinke, President of the Port of Gdansk. - Our advantage is also the fact that we are a port without restrictions, free from freezing, deep water. The port basins are up to 17 m deep, which makes it possible to receive the largest container ships in the world and the largest bulk carriers that enter the Baltic Sea.

The Port of Gdansk is the fastest growing European port in the last decade and the largest container port in the Baltic Sea.