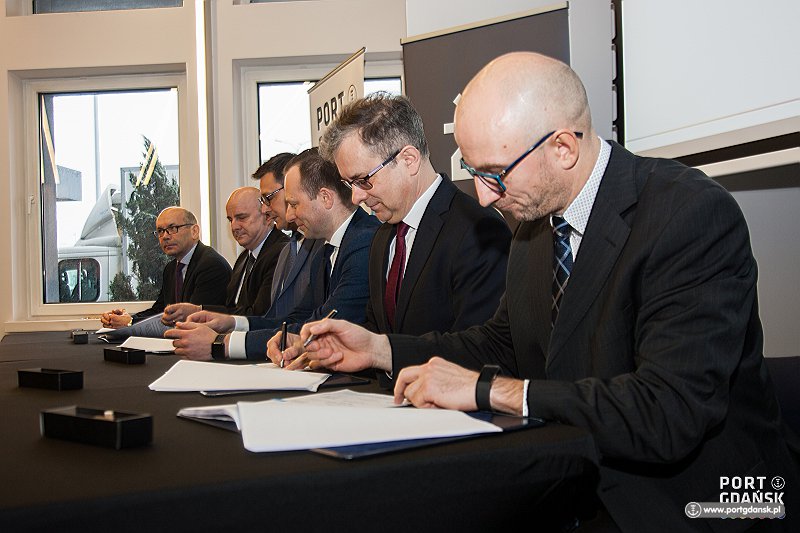 The Port of Gdansk Authority is implementing huge projects which received subsidies from EU funds. Agreements with Contract Engineers who will supervise the implementation of the largest two projects have just been signed.

The dredging of the fairway along with the conversion of the quays at the Inner Port and the modernisation of the road and railway network at the Outer Port are the largest two investments to be carried out by the Port of Gdansk with the support of EU funds. Within the framework of the Connecting Europe Facility (CEF), the PGA will not only improve navigation along the port canal, but also considerably alter the terminals' access infrastructure. The Port Authority has just signed agreements with Contract Engineers.

Enlarge"Contract Engineers have a difficult task ahead of them. They will supervise all the work related to the implementation of two CEF projects. These investments have to be completed by 2020, which is why huge responsibility lies with our Partners. I am very pleased that our investment programme is gaining momentum, because its implementation is key to the Port's development. It will give us a chance to become the largest port in the Baltic Sea," says Lukasz Greinke, President of the Board of the Port of Gdansk Authority.

EnlargeA consortium comprising the following companies: Tractebel Engineering, Przedsiebiorstwo Uslug Inwestycyjnych EKO-INWEST, and Projmors Biuro Projektow Budownictwa Morskiego, will supervise the dredging of the fairway and the modernisation of the quays. As part of this project, about 5 km of quays will be modernised - the Oliwskie Quay, the Obroncow Poczty Polskiej Quay, and the Mew Quay, as well as the Dworzec Drzewny Quay and the Zbozowe Quay along with a part of the quay at the Wisloujscie Fortress. The fairway, running from the Port's entrance to the turning area near the Remontowa ship-repair yard, will be 12 metres deep (on average 11.2 m by the quays) and 90 metres wide, while the Kaszubski Canal will reach the depth of 10.8 m (width: 75 m).

"We will be carrying out this task as a consortium, with Tractebel Engineering as the leader, joined by Projmors and Eco-Inwest. We realise that the investment is of paramount importance both for the development of the Port in Gdansk and the entire region. We are responsible for supervising a strategic investment thanks to which the Port is to become the main communication hub in the Baltic Sea. Our work will have immense influence on the quality and timeliness of the execution of this task. During the implementation of the task, we will make use of Tractebel Engineering's extensive experience in Poland, but also our international experience, gained at the world's largest ports. We will be supported by two very experienced companies with a background in the port industry, Projmors and Eco-Inwest," explains Jaroslaw Krzyzanowski, President of the Board at Tractebel Engineering S.A.

EnlargeThe execution of the project involving the conversion of the road and railway system will be monitored by Sweco Consulting. The project includes the expansion and modernisation of the communication system at the Outer Port and of the access roads to the terminals (Kontenerowa street), the conversion of Budowniczych Portu Polnocnego street, and the construction of a car park for heavy goods vehicles on Portowa street.

"We are very happy to have signed this agreement. We realise how difficult and demanding the project is and how important it is for the development of the Port of Gdansk. We have no doubt, however, that our extensive experience in the implementation of similar projects and our expert knowledge in this area will guarantee success," says Narcyz Stefanczyk, CEO of Sweco Consulting.

EnlargeThe agreements with the Engineers include task execution management and supervision, as well as monitoring, reporting, collection of documents and data for total control of the implementation of the investment and for its settlement in-kind and financial settlement.
Both projects, i.e. the "Modernisation of the fairway, quay expansion, and improvement of the conditions of navigation at the Inner Port in Gdansk" and the "Expansion and modernisation of the road and railway network at the Outer Port in Gdansk", received subsidies from CEF, amounting to 85% of the total investment costs. Their total value is estimated at PLN 600 million, out of which EU funds constitute more than 500 million.