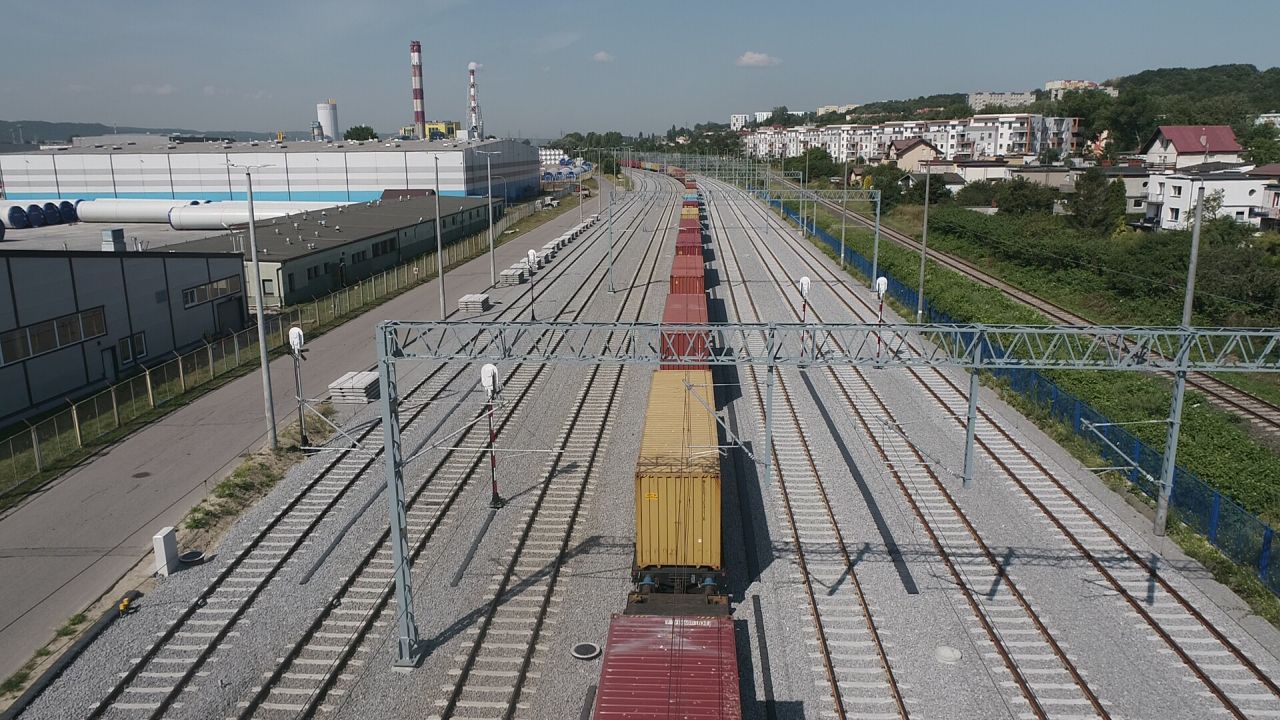 The project concerning the reconstruction and electrification of railway access to the western part of the Port of Gdynia has been officially completed. Thanks to it, carriers will be able to give up diesel locomotives, and the amount of goods that will be able to come to the Gdynia port by rail will also increase.

The project "Extension of railway access to the western part of the Port of Gdynia - reconstruction and electrification" assumed the modernization of the railway tracks leading to the intermodal railway terminal.

The details of the completed investment were presented by the Port of Gdynia Authority at a special conference which took place on October 22nd. The construction designs were carried out by Elkol Sp. z o.o., and the contractor was a consortium of Colas Rail Polska and Colas Rail S.A.S.

The contractor was tasked with the reconstruction of the track surface with turnouts and the construction of an additional track and two new turnouts. Thus, the number of railway tracks on the section covered by the works increased from six to seven. As part of the works, the surface on track no. 38 of the siding was also replaced, parts of track no. 37 were hardened with concrete slabs along with the area between the track and ul. Promowa. A traction network and a railway traffic control system were built. The project also included the construction of a new fence for the track group and a railway gate to increase the safety of track operation. At the same time, the track drainage system and energy elements were modernized. Modernized section is 2.59 km long. The last elements of the system were the adaptation of appropriate rooms to the traffic control function, equipping them, and designing and implementing a camera surveillance system.

- Last year, 101 thousand railway wagons entered the port. They transported around 5.5 million tons of cargo. Our ambitions are to develop the railway infrastructure in such a way that by 2027 these loads could be about 10 million tons - said Jacek Sadaj, President of the Port of Gdynia Authority.

- One train consists of forty 40-feet containers. Now imagine 40 such tractor combinations. This is a great benefit for the environment and the inhabitants - added the vice president of the port, Maciej Bąk.

The Gdynia port needed this investment. Thanks to it, it can now accept more cargo trains, which is a response to the growing dynamics of rail transport and will contribute to the intensification of intermodal transport at the Port of Gdynia. The safety of railway operations in the port area has also increased. Importantly, the emission of pollutants will also decrease, noise and traffic congestion in front of the port will be reduced.

- It's easy to see that electrification plus renewable energy equals zero-emission transport. In the case of wheeled transport, it is difficult to imagine the huge investments and huge outlays it would have to incur to introduce electric trucks, charging stations and everything related to it. In the case of railways, it is relatively simple. Electrified routes are also less burdensome for residents - said Deputy Minister of Infrastructure Marcin Horała, who appeared at the conference finishing the project.

The development of rail transport is also one of the strategic priorities of the state and the European Union. The investment in the port is indirectly related to the program of the TEN-T network and short sea shipping.

As shown by economic analyzes, the investment is also important for local residents. As the rolling stock of electric locomotives will be able to use the tracks, the reduction of noise and exhaust emissions will improve their quality of life.

- The port of Gdynia is in the middle of the city. Here, everywhere around us live people who want to live in peace, quiet, without exhaust fumes. The whole range of the most important economic, ecological and social aspects makes it a very good investment. No wonder that the European Union is willing to finance such investments, it is easy to obtain these funds - said Marcin Horała.

Ultimately, the investment is also intended to encourage rail operators to replace their rolling stock with more environmentally friendly ones.

- We are looking towards green solutions. Thanks to electrification, we will soon be able to replace some diesel locomotives with locomotives that are more environmentally friendly - said President Sadaj.

Kazimierz Koralewski, vice-president of the Port of Gdynia Authority, also pointed out that unforeseen difficulties occurred during the implementation of the investment, which the contractor and the port team dealt with very well.

- We are aware that various conditions during the investment, such as a pandemic, an increase in material prices, required a lot of efforts to complete the project - said Koralewski. - I am convinced that if it were not for the team that dealt with this investment so intensively and effectively, it would be difficult to complete it in such a timeframe.

The value of the investment is approximately PLN 70 million, of which PLN 18,957,618.72 is co-financed by the European Union.

It is not the only railway investment related to the Port of Gdynia.

- We are striving to increase the share of rail transport in the port area, and this is only one of the tasks that support this goal today. I must mention the investments carried out in Gdynia. These include the improvement of railway accessibility, an investment carried out by PKP PLK, worth PLN 1.5 billion. It will be completed next year. This is another milestone in increasing the share of rail transport. PKP PLK is also constantly working on line 201, which is very important when it comes to increasing accessibility - said Maciej Bąk, Vice-President of the Port of Gdynia Authority for Finance and Financial Management.

President Jacek Sadaj also revealed that the Port of Gdynia is also already working on a modern intermodal terminal.

- We have a small field reserve. In the near future, we will be moving in this direction so that an intermodal terminal will also be built in the Western Port at the squares that are being built today. All the projects that we implement complement each other. In the end, they will be fastened with one common buckle in order to develop the port in Gdynia, so that this amount of cargo could be as large as possible and to get as much out of this space the port has at its disposal - said Sadaj.