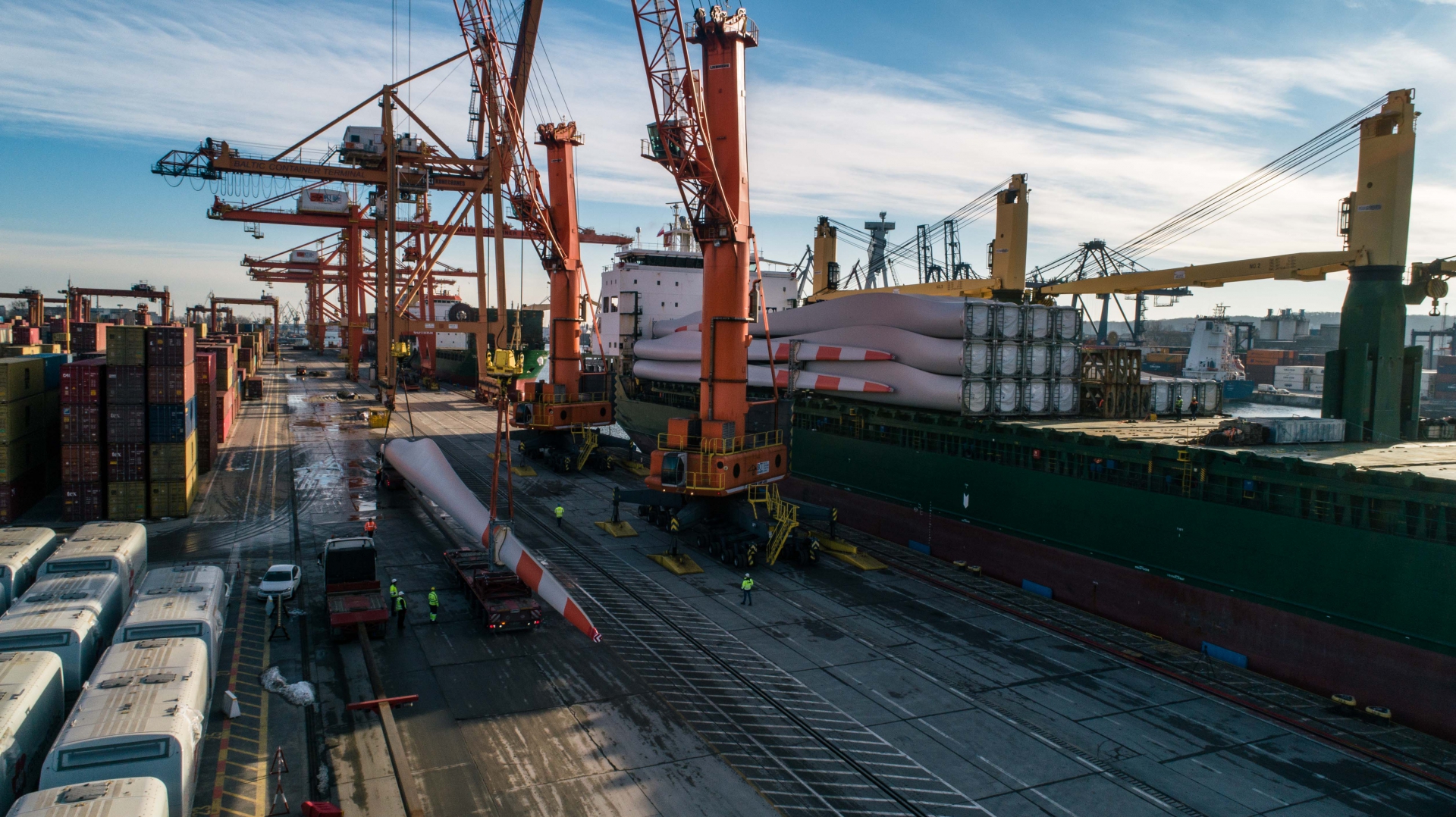 Last weekend, another transport of wind turbine elements arrived at the Port of Gdynia. 30 propeller blades were unloaded at the BCT Gdynia terminal. Morska Agencja Gdynia is responsible for the full agency service of the ship and reloading in the port. The growing wind energy market in Poland and efficient service of logistic chains make the Port of Gdynia a leader in servicing wind turbine elements in this part of the Baltic Sea.

- We unloaded 30 propeller blades from Chipol Yongan for the Krasin project. The length of the blades is 62m. This is only the second vessel (after MV Angus) of many that will come to the port of Gdynia this year with a load of wind turbine elements. The next expected vessel, with a record load of 114 propeller blades, will arrive from China in the first half of February – said Paweł Weiner, Offshore Advisor to the Board at the Gdynia Maritime Agency.

- Together with the BCT terminal and the Andreko transport company, dealing in inland transport of oversized cargo, we handle 100% of calls of this type of vessel in Gdynia. We are very optimistic about the future of wind energy development in Poland. We hope that the current number of wind turbines to be constructed will double in the coming years - informed MAG representatives.

Chipolbrok Yongan belongs to Chipolbrok Sino-Polish Ship Society S.A. Thanks to the growing supplies of wind farm elements, the shipowner's ships can be seen more and more often in the home port of the shipowner's Gdynia branch. Chipolbrok Yongan is a vessel acquired from the German shipowner Hermann Buss last year, built in 2010. The vessel entered the Chipolbrok fleet along with its sister unit Chipol Changan. The ships are 180 meters long, 28 meters wide and equipped with 4 deck cranes, 60 tons each.

Maciej Krzesiński, director of marketing and international cooperation of the Port of Gdynia Authority, emphasizes that this type of transhipment takes place more and more often in the port of Gdynia: "This only proves that we are really ready and we are preparing very hard for projects that will be implemented not only on land, as is currently the case, but also in the Baltic Sea. We want to create such a friendly environment for the handling of elements related to the construction of offshore wind farms at our port. today they are actually 100% ready for it, there is still some minor investment work to be done ".

Unfortunately, despite political declarations in the offshore act adopted by the government in recent weeks, there are no provisions regarding the official location of an installation port in Gdynia for the construction and operation of Polish offshore wind farms. Both the location, infrastructure and experience in handling this type of cargo make the Port of Gdynia the place of first choice for servicing offshore wind farms.

By 2030, offshore wind energy could add a significant value to GDP and create additional jobs. More than 100 Polish entities have already been identified that can be successfully involved in the preparation, construction and operation of wind farms in the Polish Baltic Sea. For many Polish local enterprises, joining the offshore energy industry will be an opportunity for significant development, giving them the opportunity to generate high revenues.