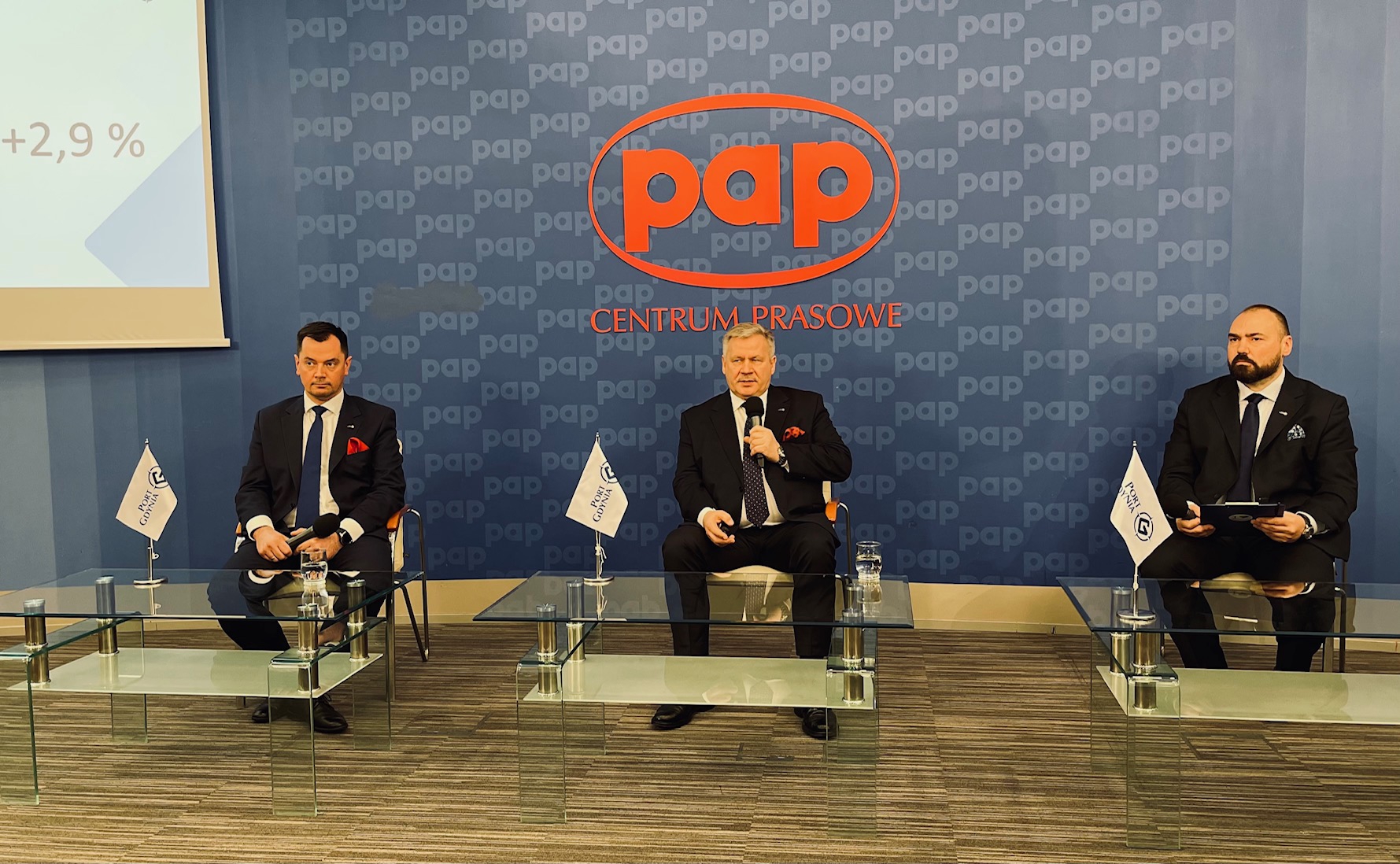 2020 was a year of huge challenges, but despite the global economic slowdown resulting from the pandemic, it turned out to be record-breaking for the Port of Gdynia. The pace of investments did not slow down, key decisions were made for the further development of the port and a record result was achieved in transhipments, giving an increase of 2.9% compared to the previous year without a pandemic.

This result places the Port of Gdynia in the second position in the TOP 10 PORTS ON THE BALTIC SEA IN 2020, in the overall growth dynamics compared to the previous year.

The dynamics of grain transshipment growth is significant - in 12 months it amounted to 68.6%. The increase in container handling is also important - 0.9% per annum, which places the Port of Gdynia in the second position among the largest container ports in the Baltic Sea. This result gives credibility to the implementation of the largest investment since the creation of the port - the Outer Port.

The Outer Port for the next generations

In February 2021 port autorities said „call” and opened the applications of firms interested in competitive dialogue in the project "Construction of the Outer Port at the Port of Gdynia". The bidders included:

One tenderer will be selected in the PPP procedure, who will build and will be the operator of the Outer Port.

- We want to continue the vision of the builders, Tadeusz Wendy and Eugeniusz Kwiatkowski, so that the Port of Gdynia could be a generator of the country's economic development for the next decades - said Adam Meller, President of the Port of Gdynia Authority S.A.

All investments are continued according to the schedule

Completion of works on the construction of the New Public Ferry Terminal in a new, functional and prestigious location is approaching rapidly. The new facility will be able to handle 240 m long ferries and will provide shorter service times, thanks to which the port will gain new shipowners in the developing ro-ro segment. With the implementation of the investment as part of sustainable development and the #greenport idea, from 2021 it will be possible to power ships from the land, which will result in a total reduction of exhaust gases.

- We adjust the quality of infrastructure to the growing expectations of the market. Investments improve the competitive position of the port in the Baltic Sea basin. Thanks to the investments we are implementing, we are strengthening Poland's role in the trans-European transport network - said Jacek Sadaj, Vice President for Infrastructure and Asset Management at the Port of Gdynia Authority S.A.

- The financial results for 2020 confirm the excellent condition of the company. We have the ability to generate capital that serves the further development of the port in the interests of all its customers. The very good results of the Port of Gdansk Authority SA are proof of the high quality of services offered by port terminals and the effect of the Company's investment policy - said Maciej Bąk, Vice-President for Finance at the Port of Gdynia Authority S.A.

Having a real impact on the surrounding environment, at a particularly special time, which is the global pandemic, the Company's authorities initiated the "Let's Share Good" campaign, the idea of which is to help the local community, hospitals and entrepreneurs in the fight against an invisible enemy.

By the decision of the Port of Gdynia Authority S.A. the elderly from associations with which the PGA S.A. works, members of the World Association of the Home Army, with whom he has been cooperating for years, supporting statutory activities, as well as participants of the Warsaw Uprising living in Gdynia. Every day, meals, essentials and purchases are provided to those veterans who are at high risk and should not leave the house.

The Port of Gdynia Authority with the "Lighthouses of the Maritime Economy 2021" award from the GospodarkaMorska.pl portal

"Lighthouses of the Maritime Economy" is a cyclical award of the GospodarkaMorska.pl portal that distinguishes companies and people from the maritime industry. Every year, the Award Committee awards "Lanterns" in several categories. The Port of Gdynia Authority has won the award in the "Sea Ports, Sea Logistics" category.

Award for outstanding results in many spheres of activity

- The justification for this year's choice are the outstanding results of the Port of Gdynia in many areas of activity at the same time. Despite the pandemic, the Port of Gdynia, as the few in the region and the only one in the country, recorded growth in 2020 and at the same time a record in transhipment. The Port Authority has proved to be equally effective in terms of ongoing investments, maintaining their pace, despite many difficulties resulting from the restrictions related to the coronavirus pandemic. The Port of Gdynia has also demonstrated in such an important aspect today as corporate social responsibility. From the beginning of the pandemic, the Port of Gdynia Authority has been involved in helping to combat its consequences by purchasing medical equipment, helping the most needy, the elderly and veterans from the World Association of the Home Army - informs Mateusz Kowalewski, the publisher of GospodarkaMorska.pl.