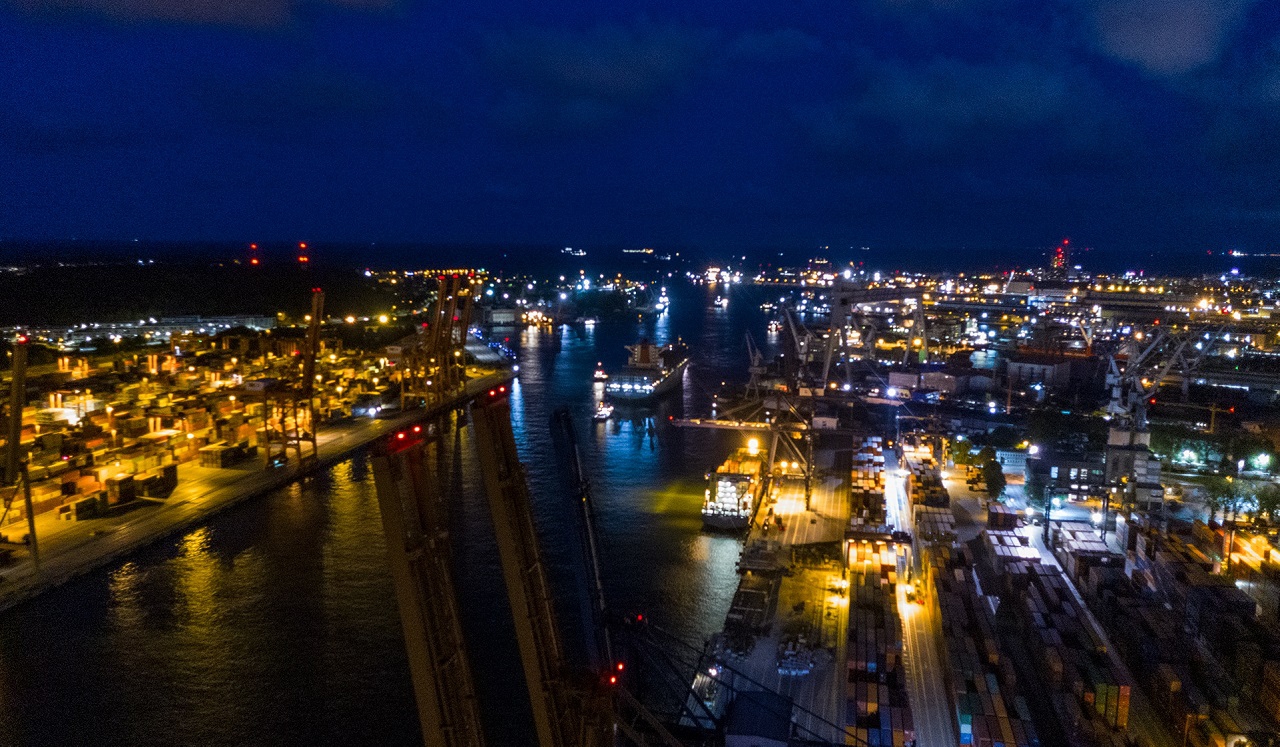 Seaports, Shipping, Logistics
The record-breaking Hella container ship at the Port of Gdynia. The debut of the ocean line to the USA [VIDEO, PHOTOS]

On Monday, August 23, Hella, the largest vessel of the Portuguese flag, moored at the Bulgarian Quay in the Port of Gdynia. The shipowner of Hella is the world's leading container carrier Hapag Lloyd AG. The vessel was built in 2011. Its is 275 m long, 40 m wide and has a capacity of 5605 TEU.

The ship called at Terminal Hutchison Ports Gdynia for the first time on Monday evening (23 August). It will then load the containers intended for export and transport them directly to North America ports. The total amount of cargo is approximately 1,400 TEU.

Hella will then call at the following ports: Hamburg-Antwerp-London-Halifax-New York-Norfolk-Charleston.

– We are delighted to offer our customers additional support on the Atlantic Trade, the second biggest trade for Polish exports – says Lena Christenson Duus, Managing Director Area North at Hapag-Lloyd. – By bringing the extra loader into schedule, we clearly demonstrate our strong commitment towards our local customer base in this exceptionally challenging market situation – she continues.


Port of Gdynia. "We count on regular and permanent ocean connections"

– The first connection with the United States made by the operator Hapag Lloyd AG in agreement with the GCT terminal is a new quality for us – admits Maciej Krzesiński, director of marketing and international cooperation of the Port of Gdynia Authority. – Until now, when thinking about ocean connections, people talked mostly about connections with Asia, mainly with Chinese ports. Indeed, a significant part of maritime trade is this direction. However, the Port of Gdynia is looking for opportunities not only for development towards Asia, but also building other routes that undoubtedly have potential. It is in the connections across the Atlantic that we see our chances.

And, as he adds, the Port of Gdynia assumes that connections with the USA will be regular.

– When making the first call, operators often test ports and terminals, it is obvious to us. The price includes fast and high-quality reloading services. We showed our best side at Hella's call – assures Krzesiński, adding that Hapag Lloyd AG is a very important partner for the port.

Maciej Krzesiński notes that so far the port of Gdynia has often been perceived as the so-called a feeder port providing short sea connections.

– At the moment, the Port of Gdynia is implementing its development strategy by handling ocean connections – emphasizes Krzesiński. The director emphasizes that the interest of shipowners is a very good signal, and the Gdynia container terminals have a bright future ahead of them. – It is also worth noting that the Port of Gdynia has recently served another ocean connection with India and Pakistan. They are performed by the MSC operator on the BTC terminal. It is clearly visible that the development plans of the Port of Gdynia related to container handling are in line with the current trends in this segment of the global market. Our investments in storage yards, intermodal terminals and finally container terminals gain additional business justification with each such call – concludes Maciej Krzesiński.


The Port of Gdynia is breaking another records

Port of Gdynia has very high transshipment results. July was a month of intense increases. Monthly results indicate over 117% growth dynamics compared to the previous year. The record results are related to the reloading of containers with a growth dynamics of 114 percent from the beginning of the year. After seven months of 2021, it achieved a total increase of 12.5%. The total value of infrastructure investments within the Port of Gdynia is over PLN 4 billion. It is worth noting that in 2020 the port recorded the highest transshipments in its history, amounting to 24.6 million tonnes.

The constant increase in transshipments and good forecasts for the coming years are a strong argument for the development of the Gdynia port. These results favor new connections and terminal development.


About the Port of Gdynia

The Port of Gdynia is a universal seaport on the southern Baltic Sea with dynamically growing transshipments. It is a hub of the European TEN-T core network and the entry point of the Baltic-Adriatic Corridor, the extension of which is the Gdynia-Karlskrona Sea Route connecting Gdynia with Sweden. The Port of Gdynia is a recognized brand of an intra-European logistics center. The modern infrastructure and terminals of the Gdynia port are used by the largest global and European shipping operators, including MSC, Hapag-Lloyd, Unifeeder, Containerships, MacAndrews, Transfennica, Finnlines-Grimaldi, Stena Line.

Hutchison Ports is the division of CK Hutchison Holdings Limited (CK Hutchison) dealing with ports and related services. Hutchison Ports is a leading global investor, developer and port operator operating in 52 ports in 26 countries in Asia, the Middle East, Africa, Europe, the Americas, Australia and Oceania. Over the years, the Hutchison Ports Group has expanded into other areas related to logistics and transportation, including cruise ship terminals, airport operations, distribution centers, rail services, and ship repair yards. In 2020, the terminals belonging to Hutchison Ports handled a total of over 83 million TEU.

Hapag-Lloyd has a fleet of 250 modern container ships, and the total transport capacity of this shipowner is 1.8 million TEU. This makes Hapag-Lloyd one of the world's leading liner shipping companies.

The company employs approximately 13,400 people and has 394 offices in 130 countries. Hapag-Lloyd has a container capacity of approximately 2.8 million TEU – including one of the largest and most modern refrigerated container fleets. A total of 121 liner services worldwide provide fast and reliable connections between more than 600 ports on all continents. It is therefore one of the leading operators in the transatlantic markets, the Middle East, Latin America and inside America. Let us add that Hapag-Lloyd mainly exports furniture, food, glass and machinery for the Atlantic trade.