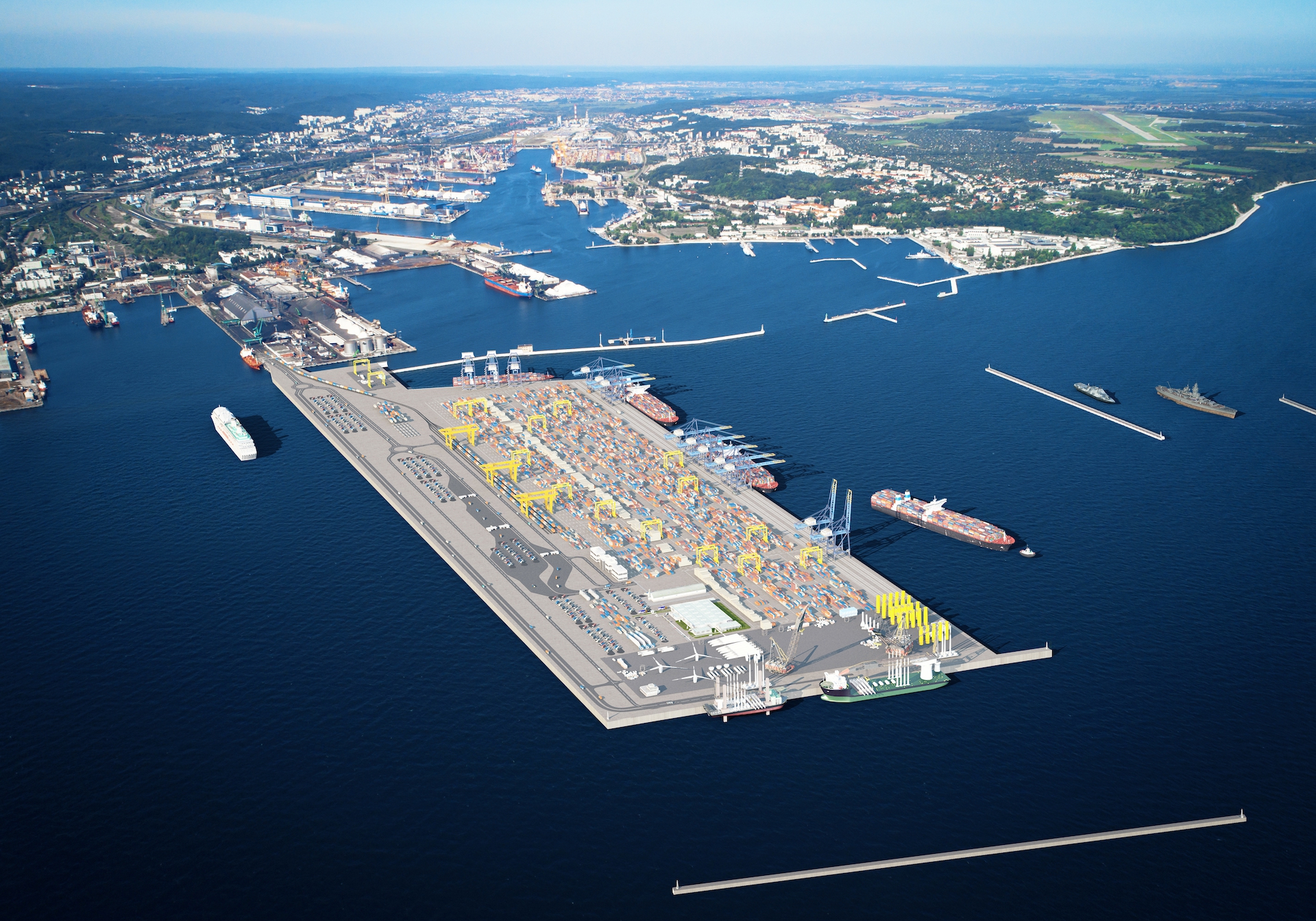 Seaports, Shipping, Logistics
The whole world eyes set on the Port of Gdynia – offers opened for a private partner for the Outer Port investment

The sharks of the global maritime market and global players have turned their attention to the Port of Gdynia. All thanks to the procedure announced in November last year for the selection of a private partner for the project entitled "Construction of the Outer Port in the Port of Gdynia", the deadline of which is set for February 5. Four applications were submitted within the time limit.

The contract includes the design, construction, financing, equipment, and then maintenance and operation, during the contract period, of the pier of the Outer Port, where the container terminal will be located (but also other, additional functions of the constructed infrastructure are allowed), with a pre-assumed target capacity of 2.5 million TEU per year. The scope also includes dredging works in the area of ​​the fairways to the Port of Gdynia (water access infrastructure). The excavated material from the dredging area will be cleared at the site of the planned pier of the Outer Port. The scope of the project also covers land access infrastructure by road and rail, with the Public Entity responsible for its construction from the land side to the terminal gates. It is permissible to phase an investment, and the conditions for phasing will be negotiated during the competitive dialogue ("Project"). The purpose of the procedure is to conclude a PPP contract.

Meridiam Eastern Europe Investments SAS is one of the funds managed by the French group Meridiam SAS, which specializes in developing, financing and managing long-term public infrastructure projects. The group is part of a consortium that builds waste incineration plants in Olsztyn. The Group submitted an offer in a consortium with the Gdynia Terminal Holding SAS, which is owned by CMA CGM.

CMA CGM S.A. is a French container transport company. It is a leading global transport group, using 200 shipping routes between 420 ports in 150 different countries, ranking fourth behind Maersk Line, MSC and COSCO Shipping Lines. Through its company, Terminal Link, it operates around 13 container terminals in countries such as the USA, France, Greece, Morocco and South Korea.

Since 2005, Hutchison Ports has been implementing a number of investments at the Port of Gdynia, which have resulted in the transformation of the shipyard company into a modern container terminal. These investments are part of a development program aimed at increasing the efficiency and handling capacity of Hutchison Ports Gdynia (GCT) and achieving the status of the leading container terminal in the region not only for feeder connections and short sea shipping, but also for direct calls by ocean vessels. During the difficult last year for the entire industry, the terminal for the first time exceeded the number of 400,000 TEU handled during the year (exactly 401,546 TEU).

ICTSI was founded in December 1987 in the Philippines and has been one of the leading operators among international container terminals for over 20 years. Following success in the management and operation of the Manila International Container Terminal (MICT), from 1994 it embarked on an aggressive international and domestic expansion program. Today, the ICTSI Group operates in 11 countries on four continents.

ICTSI began its adventure in Gdynia in May 2003, obtaining a license granted by the authorities of the port in Gdynia, allowing for the development, operation and management of the container terminal in Gdynia, Pomerania, Poland. The concession was awarded for a 20 years. ICTSI has purchased 100 percent of the Baltic Container Terminal (BCT). In 2019, BCT Gdynia handled a record 500,000 TEU of containers. In 2020, this result was repeated.

A company registered in Krakow, which is part of a consortium implementing a billion-dollar tram investment in the capital of Małopolska. Works related to the construction of other civil engineering structures, not classified elsewhere, are listed as the main industries in the PKD. Company is owned by Chinese partners CHINA HARBOR ENGINEERING COMPANY LTD, which is a subsidiary of China Communications Construction Company, engaged in the construction of infrastructure such as marine engineering, dredging, construction of roads and bridges, railways, airports and factories, and QINGDAO PORT INTERNATIONAL CO., one of the largest ports in the world.

The Outer Port for the next generations

- We want to continue the vision of Tadeusz Wendy and Eugeniusz Kwiatkowski, so that the Port of Gdynia could be a generator of the country's economic development for the next decades. We adjust the quality of infrastructure to the growing expectations on the market. Investments improve the competitive position of the port in the Baltic Sea basin. Moreover, the new breakwaters will act as a cover for the entire port, which is a dual-purpose port and, moreover, a port of strategic importance for the functioning of the Polish economy. Thanks to the implemented investments, we are strengthening the role of Poland in the trans-European transport network. - said Adam Meller, President of the Board of the Port of Gdansk Authority S.A.

The construction of the Outer Port is the most important project in the history of the Port of Gdynia since its construction. This project, to be implemented in a public-private partnership, includes the construction of a new port pier, on which a container terminal will be located along with infrastructure for other port functions, e.g. an installation port for the construction of offshore wind farms or an LNG bunkering terminal. The Outer Port will become an extension of the existing Coal Pier. The deepened new waters of the Port of Gdynia will be 17 meters deep at the quays, while currently the maximum depth of the waters of the Port of Gdynia is approximately 13.5 meters. The quays at the Outer Port will enable the entry of container ships with a length of over 400 meters and a draft of up to 16 meters. These are the largest vessels that can enter the Baltic Sea due to the depth of the Danish Straits. The estimated annual transshipment capacity of the terminal is 2.5 million TEU, or about 25 million tons of cargo. The Outer Port will contribute not only to the development of the Port of Gdynia, but will also translate into increased budget revenues for Gdynia, Pomerania and Poland. It will be an important element of the Trans-European Transport Network TEN-T.

Record reloading despite the global crisis

Despite the global economic slowdown resulting from the pandemic, the pace of investments and transshipments at the Port of Gdynia is not slowing down. In 2020, a record result was achieved - over 24.6 million tonnes. Despite the enormous challenges, the Port of Gdynia, as the only Polish port, ended it with an increase - 2.9% compared to 2019. The increase in container transshipments - 0.9% y / y is also important. Also in January 2021, there was a sharp increase in container handling - 114.4 percent year on year.