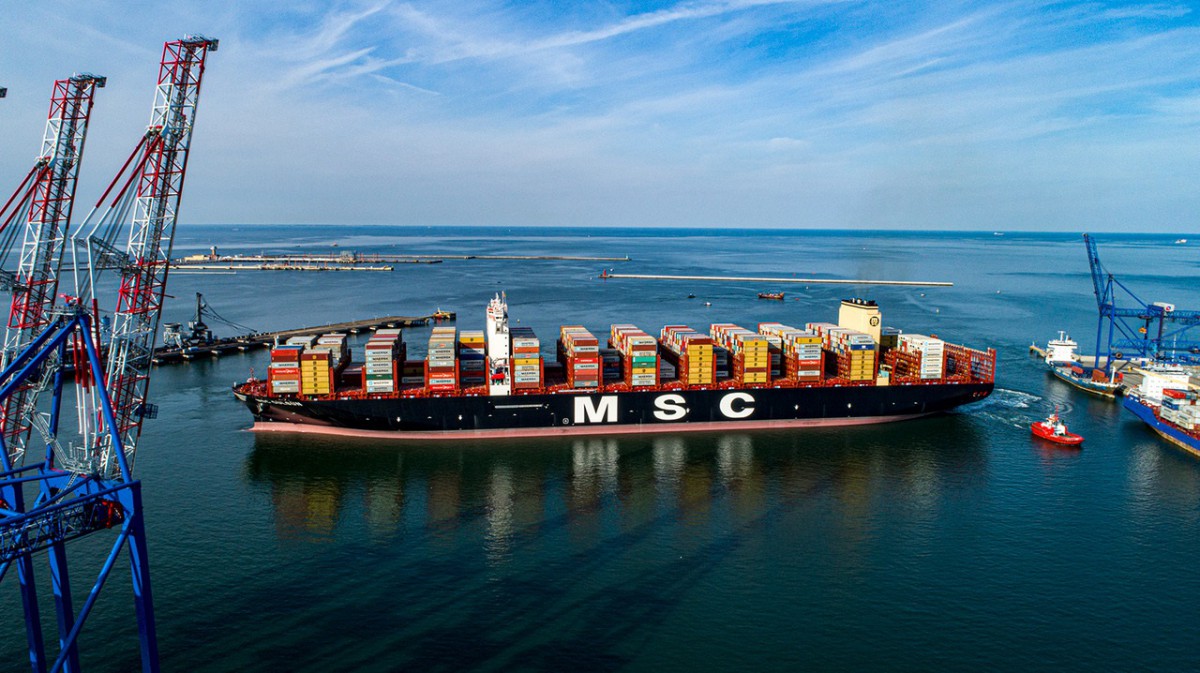 The world's largest container ship already called at the Port of Gdansk. MSC Gülsün moored on Friday at the T2 quay of the DCT Gdansk container terminal. The ship can take almost 24,000 thousand 20-foot containers on board, making it a record holder among such vessels.

The container ship MSC Gülsün arrived at DCT Gdansk as part of the regular 2M Silk / AE-10 service connecting Asia with Europe. The President of DCT Gdańsk announced that the ship's trip from Shanghai to Gdansk lasts about 39 days.

- At DCT Gdańsk we transship11,000 containers, which corresponds to 18,000 TEU. This is the largest regular exchange in Europe and one of the largest in the world. If we stack these containers on top of each other, they would form a tower three and a half times taller than Mount Everest - says Thorpe.

The container ship can take on board 2 024 refrigerated containers, which, according to MSC, accelerates trade in food, beverages, pharmaceuticals and other refrigerated products between Asia and Europe.

According to the carrier, the MSC Gülsün container ship can be called a green vessel. The ship's bow has been designed to increase energy efficiency by reducing hull resistance. The latest technology also minimizes wind resistance, which translates into lower fuel consumption. The unit is equipped with a hybrid exhaust purification system approved by IMO. It can be converted to low sulfur fuel, it is also adapted for conversion to LNG. Additionally, to ensure the safety of the crew and cargo, the ship has a double secured hull around the engine room. A specialized program has been installed on board, which allows the hull condition to be assessed in 3D. For even greater safety, the unit is equipped with a "two-tower" fire protection system with high-performance pumps.

MSC Gülsün is the first 23 000+ TEU class unit built for MSC Mediterranean Shipping Company. The world leader in transport and logistics has ordered a total of six such vessels that will come into operation in the years 2019-2020. Ships are being built at Samsung Heavy Industries shipyard in South Korea. In addition, five more vessels of this type for MSC are being built at Daewoo Shipbuilding and Marine Engineering (DSME) in South Korea.

According to MSC, MSC Gülsün and its sister ships are setting a new standard in container transport, in particular regarding ecology. According to the carrier, large ships emit less CO2 than other means of transport (airplanes, trains, trucks or barges) per one transported container, which allows companies transporting goods under MSC services between Asia and Europe to reduce their carbon footprint in their supply chain. The new class of container ships has been designed to protect the environment, performance, stability and security, as well as to meet new digital challenges. Thanks to fast transport and intelligent container marking system, the transport of goods is transparent, safe and reliable. This confirms MSC's commitment to providing the best services on the largest and busiest trade routes.

Thanks to the increased fuel economy and energy efficiency of the new container ships, MSC is well on its way to achieve ahead of time the international 2030 environmental policy goals set by the International Maritime Organization (IMO). The MSC fleet in 2015-2018 has already managed to provide a 13% improvement in emissions per ton of transported cargo - the carrier informed.

Since 2013, the largest container ships in the world regularly have called at DCT Gdansk. The state-of-the-art STS cranes with a range of over 25 rows of containers, deep-water quays and turntables up to 670 m enable the terminal to unload container ships of the new class Megamax-24.

DCT Gdańsk enables Poland to participate in the exchange of goods on the largest maritime trade route connecting Europe with Asia. It also ensures efficient trade exchange of this region's products with China, while reducing costs, more competitive delivery times and lower carbon dioxide emissions per container compared to other ports.

The terminal not only serves Poland, but is also one of the most attractive business models serving the Baltic Sea markets. It is also the most cost-effective way to reach the inland foreign markets of the Czech Republic, Slovakia, Belarus and western Ukraine.

In 2018, DCT Gdansk terminal transshipped almost 1.9 million TEU, regularly handling the arrivals of the largest container ships in the world. DCT Gdansk is the only terminal in the Baltic Sea capable of handling vessels of this size. In 2019, cargo turnover at DCT Gdansk will exceed 2.0 million TEU.

In addition to continuous development and investment in terminal infrastructure and modern equipment, DCT Gdańsk is also actively involved in activities that care for the environment and the local community, as they are the foundation of sustainable socio-economic development.

DCT is a member of the PSA Group, which shares ownership with the Polish Development Fund (PFR) established by the State Treasury and the Australian IFM investment fund.