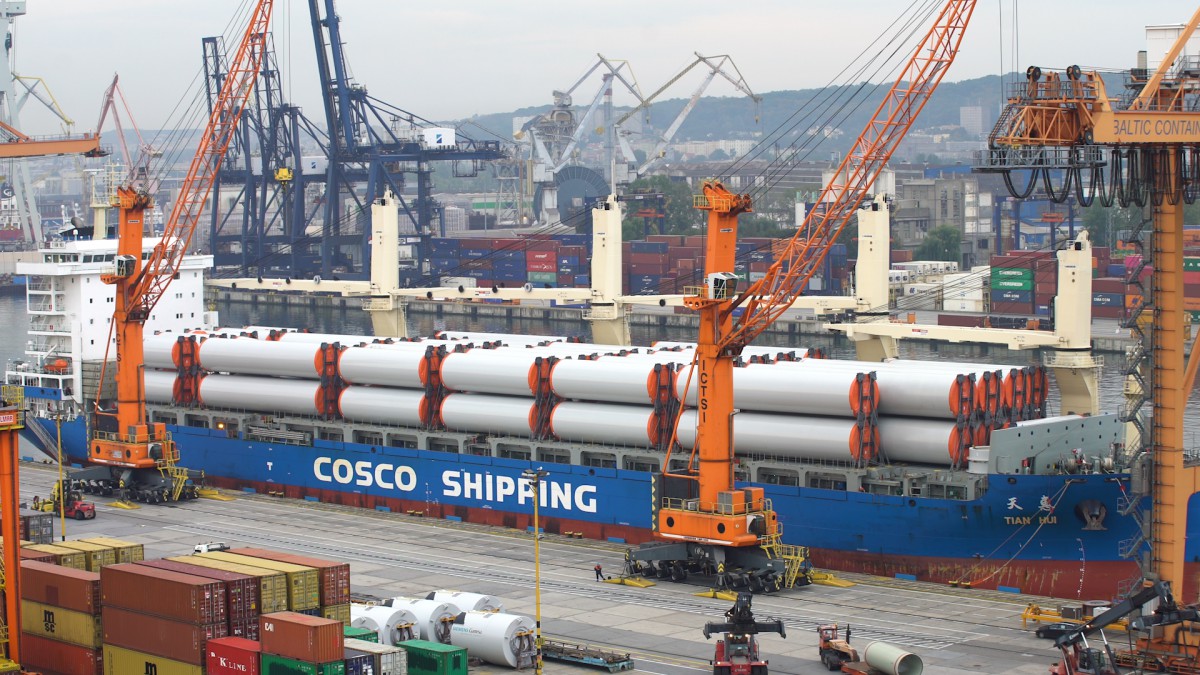 Tian Hui vessel brought as many as 115 elements of wind turbines from China to Gdynia. This is a record result in the history of the Port of Gdynia. The unloading of the cargo ended on Sunday night at BCT - Baltic Container Terminal. Morska Agencja Gdynia was responsible for the agency's handling of the ship.

- The Tian Hui vessel was built in 2018. It’s 189 m long, 28 m wide and has 11 m maximum draft. It brought a record transport of wind mast sections to Gdynia from Chengxi shipyard in China. They will be used in wind farms in the West Pomeranian Voivodeship. Interestingly the vessel did not use the standard route through the Suez Canal. It sailed through chose the Northern Sea Route, leading through the northern Arctic Circle. Thanks to that travel time has been reduced by 13 days - says Mariusz Karbowski, an agent of the Tian Hui ship from the Gdynia Maritime Agency.

Tian Hui moored at Baltic Container Terminal on September 26 morning. It brought sections (segments) and foundations (TBR - tower base ring) with equipment, which are used to assemble the complete mast (tower) on which subsequent elements are mounted, such as: gondola, rotor, propeller blades. They will be part of the largest wind farm in Poland, which consists of as many as 81 GE turbines. As reported on the MAG website, currently the largest farm in Poland is the "Margonin" wind farm, whose elements were also reloaded at the Port of Gdynia in 2009.

Karbowski added that MAG was responsible for the full port service for the Tian Hui vessel and its cargo.

- We arrange unloading in the port plus loading for the destination transport, which will take these components to a specific wind farm - says Karbowski.

- It only proves that we are indeed ready, and we are prepared for projects that will be implemented not only on land, but also in the Baltic Sea. We want to create such a friendly environment so that reloading of elements related to the construction of offshore wind farms would take place in our port. Our terminals are already almost 100% ready for it, but some minor investment works are still to be done - says Maciej Krzesiński.

A few days ago vessel Chipolbrok Pacific arrived at the Port of Gdynia, also with elements of wind turbines on board. The ship arrived on September 21 at BCT - the Baltic Container Terminal.

The preparation of the Port of Gdynia Authority for the construction of offshore wind farms is confirmed by a letter of intent signed in July this year between the PGA and the cities of Gdynia and Rumia as well as the Municipality of Kosakowo. It focuses on creation the most favorable conditions for investors directly involved in the construction of offshore wind farms in the Polish exclusive economic zone in the Baltic Sea.