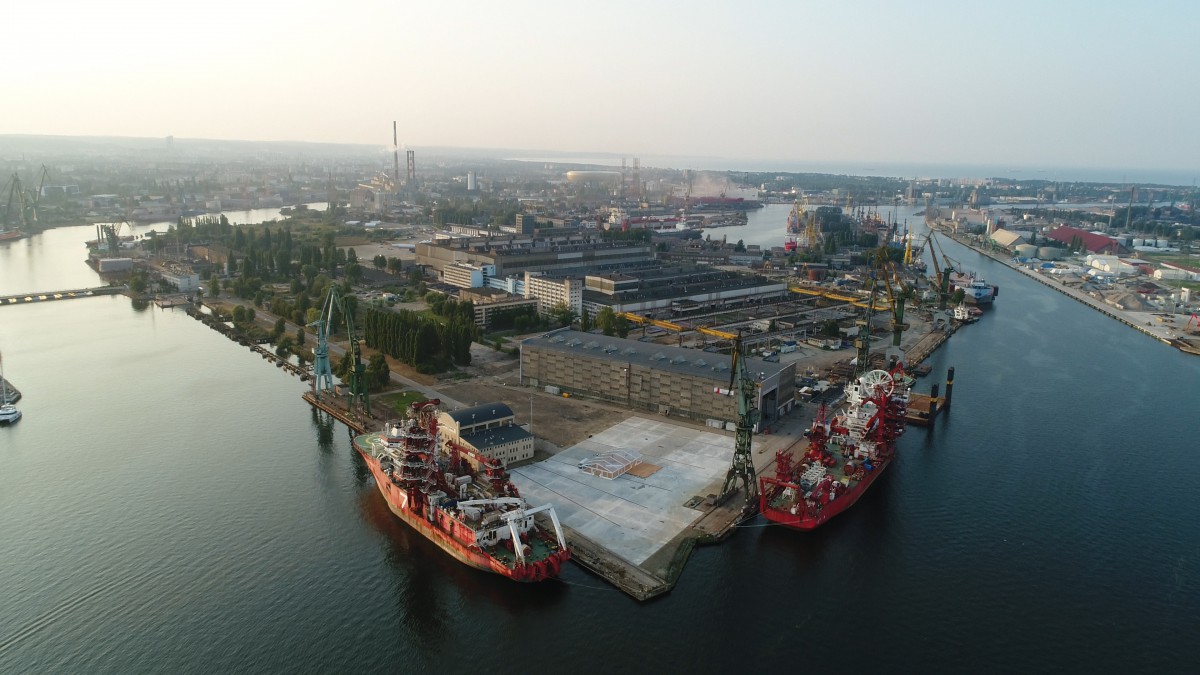 Shipyards
A mounting plate and a hall for shipbuilding production were commissioned in Gdansk(photo, video)

OdNowa Shipyard - this is the name of the Ostrów Island revitalization project in Gdańsk, implemented by the Pomeranian Special Economic Zone (PSSE). Exactly a year ago changes were announced, now words have become facts. On Saturday, on Ostrów Island, a mounting plate and production hall No. 33 were commissioned for the needs of modern shipbuilding.

"The reconstruction of the shipbuilding industry is an important element of the Strategy for Responsible Development, which we follow in creating the new economic reality of our country. Shipyards are premium places where technologically complex products of the Polish industry are created, each time requiring the shipyard's own resources as well as their research and development facilities. This is what makes shipbuilding unique for the Polish economy", Prime Minister Mateusz Morawiecki wrote in a letter to the participants of the Saturday ceremony.

Jadwiga Emilewicz, Minister of Business and Technology, said that it's a good time for the shipbuilding industry, seeing how large orders are being carried out today in Europe and in the world.

- This part of the Pomeranian Special Economic Zone is probably the most visited place by me. I was here for the first time in September 2016, when we walked upon construction site with zone authorities. Then came the plan. It is often the case that politicians talk about plans, but it is harder to carry them out. Today, on the next anniversary of the signing of the August Agreements, we not only remember the past, but we also talk about the future - said Jadwiga Emiliewicz.

She assessed that the zone also invests in human resources, which is extremely important for the future of production in Gdańsk.

- The shipbuilding industry is difficult because it lives outside the economic situation - it is once on the the rise and suddenly in decline. Certainly good, modern infrastructure, where you can make complex, complicated, large welded structures, but also equip them to create a long value chain is missing here. The fact that we have a hall and we can do it indoors, extending the working time increases the competitiveness of this place - Emilewicz told the Polish Press Agency.

Paweł Kolczyński, vice president of the Industrial Development Agency, emphasized in an interview with GospodarkaMorska.pl that this place is to be used in a few weeks for the purposes of implementing contracts that are concluded by Baltic Operator, Gdańsk Shipyard and GSG Towers.

- We already have orders, for example, for specialized works related to the metal industry for contractors constructing specialized cranes and machines. It will be a place where this activity will be concentrated - said Paweł Kolczyński, ARP vice president.

Jerzy Czuczman, president of the Polish Forum of Marine Technologies, who was present at the ceremony, noticed in an interview with GospodarkaMorska.pl that marine technologies are always worth investing on.

- Those who recognize these opportunities and invest money in the development of opportunities created by marine technologies must win in the long-term process. It is not a matter of day, week, two, we only talk in three, five, ten or even fifteen years perspective, because it has been developing so long - says Jerzy Czuczman, president of the Polish Forum of Marine Technologies.


A newly created mounting plate with an area of ​​10,000 m2 was made according to the latest technologies. It enables advanced industrial production and guarantees the highest standards of work. It gives the opportunity to build large-scale steel structures and complete vessels up to 150 meters long. Direct access to the quay allows launching vessels.

The Pomeranian Special Economic Zone also modernized production hall No. 33. As part of the work, the floor was replaced, the gates in the gable facades were enlarged, the technical facilities were modernized and it was equipped with the necessary utilities. Thanks to this, the hall was adapted for the construction of complete vessels up to 90 meters long.

- Pomeranian Special Economic Zone is credible in its activities and commitments. We still take responsibility for ensuring synergies in the economic process on the Ostrów Island. I am convinced that Gdańsk Shipyard will use this foundation and we believe that it will contribute to its success in building the shipbuilding industry 4.0. - says prof. Barbara Piontek, chairwoman of the PSSE Supervisory Board.


An important pillar of the Pomeranian Special Economic Zone's activity is support for education processes. As part of the revitalization and activation of post-shipyard areas, a center has been created to provide modern industrial robots, where students and adults can acquire knowledge and expand programming skills.

- The potential of the shipbuilding sector in Poland is developing dynamically, companies operating in this industry are working on increasingly advanced technologies. To be able to implement a modern education system in the field of robotics and automation, the Pomeranian Special Economic Zone has created one of the first centers for programming industrial robots in Poland - says Przemysław Sztandera, president of PSSE.

- We are glad that we are part of this project, it is a good direction for the development of industry 4.0. The center provides opportunities for staff training in programming and operating robots, which contributes to the development of modern production - says Dr. Robert Barbucha from the Institute of Fluid-Flow Machinery PAS.

- Regular classes at the Center will start with the new school year. The center will cooperate, among others, with the Conradinum school, in which a new faculty will be launched from September: mechatronics technician with robot programming innovation - says Lulewicz.

The Pomeranian Special Economic Zone is part of the Polish Investment Zone, one of 14 regional entities responsible for comprehensive investor service.