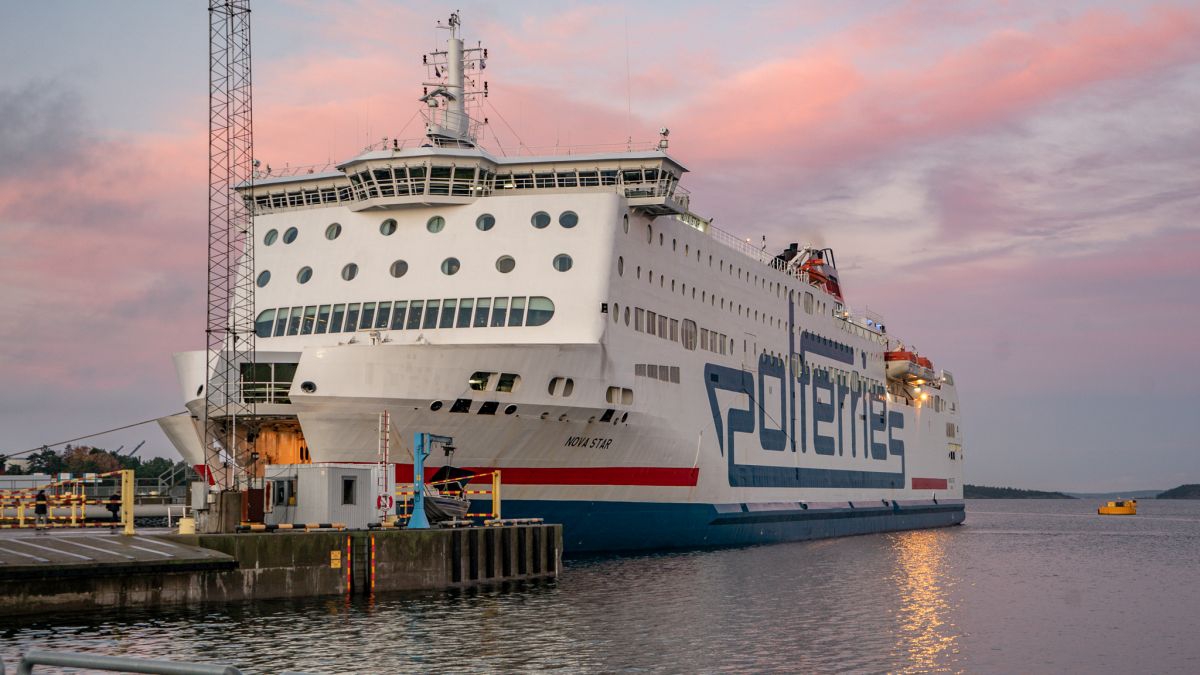 Shipyards
About the sea at sea. The cruise with GospodarkaMorska.pl [VIDEO, PHOTOS]

The first cruise with GospodarkaMorska.pl has gone down in history. There would be nothing extraordinary in an industry meeting, accompanied by exciting debates, if it were not for the fact that it took place on... the Nova Star ferry, courtesy of Polferries. The conference at sea took place on October 25-27 and began after the departure from the Westerplatte Ferry Terminal of the Port of Gdansk to Nynäshamn, Sweden. The event was divided into three panels concerning the Polish shipbuilding sector, the needs of Polish shipowners for vessels and - the most anticipated - about the financial and legal conditions of the maritime sector in Poland. 100 guests took part in the conference. See you again in a year!

The event at sea, the main idea of which was a substantive discussion about the pressing problems and challenges of the Polish maritime industry, gathered representatives of ports, shipyards, design offices, as well as financiers, but in a less formal atmosphere. And as it was later confirmed, the idea of a conference in the Baltic Sea was well received by our guests.

Many questions and answers, as well as opinions were told during our panels. And finally also the most valuable – conclusions and smaller and larger declarations. Once again it became clear that one cannot exist without the other, it is worth talking, looking for solutions and ideas, and not burning bridges.

- We have created the conference "about the sea at sea" and I am proud that we could host speakers and listeners on our ferry - said Andrzej Madejski, President of the Board of Polish Baltic Shipping (PŻB).

Where does the money for the maritime industry come from? "To cooperate you have to get to know and understand each other"

The discussions were stormy from the beginning, but the last financial and insurance panel aroused the greatest emotions. Questions related to it were raised in practically all debates.

- It was such a good panel because it connected all areas related to the construction, operation and use of ships by shipowners - said the president of PŻB. - I am convinced that all parties understood their mutual reasons a bit more in terms of the financing institution.

President Madejski emphasized that a more important aspect of the talks was that the maritime industry should consolidate with financing institutions. - Greater understanding is needed on both sides. We see areas that require a greater understanding of their activities - he added.

A representative of the Fast company specializing in services in the areas of anti-corrosion, insulation and interior design was a participant of the shipbuilding panel. He noted, inter alia, that the position of the Polish shipyards is strong, but still no key decisions have been made.

- We can build ferries and ships to put wind turbines on the planned farms. We are still waiting for financial decisions and solutions. It is important, after all, to create a financial model that will allow you to obtain money from the market and build these ships so that the shipowners will be in the plus - said Krzysztof Klocek, President of the Management Board of Fast.

The shipyards need money too. Who will provide it?

Cezariusz Lesisz, president of the board of the Industrial Development Agency (ARP), also spoke about the high need for financing the shipbuilding industry.

- During this discussion, we thought very much about what financial instruments should be used. The classic ones, i.e. the assessment of customer credibility by banks, do not work well in the shipbuilding industry. So you have to consider which instruments will be the best for us. We have a few conclusions and proposals - explained Cezariusz Lesisz.

The director of Warta S.A., Marek Lewandowski, who participated in the financial and legal panel, emphasized in turn that the most important were the conclusions of the last debate.

- This is the beginning of a further discussion on how we - as insurers and institutions financing projects in the maritime economy - are able to further meet the expectations of customers, so that we can develop this portfolio - noted the director of Warta, a leader on the marine insurance market. - We are interested in development. We want clients to have access to the best financing sources.

The president of Safe shipyard emphasized that the main problem is that financial institutions and the shipyards have different needs.

- I understand the position of financial institutions, they have their own framework when it comes to the way they operate. However, we operate in a venture capital market, we have slightly different needs. Perhaps some of the financial mechanisms that are possible in this system do not necessarily fit the puzzle. However, we are facing the global market. Other countries have their solutions, maybe not always compliant with EU directives, but still effective - indicated Marek Siemaszko, president of Safe.

- We have to defend ourselves to win contracts. The development of a common model, some line of conduct, will enable the implementation of new contracts, and above all, "consummation" of the offshore project concerning offshore wind farms or the expansion of Polish ports. It is a necessity if we don't want to lose a chance for this money - he appealed.

From July 21 to September 19, online voting in the Lighthouses of the „Gospodarka Morska” awards 2021 in the "Maritime Technology Leader" category took place. Due to the great interest and the record number of votes, two winners were selected in the second edition of the plebiscite. The award was received by the StoGda design office and the Safe shipyard during the ceremonial gala of the conference at sea.

- I hope that the next stage of activity is ahead of us. A new opening is ahead of us. We have combined two entities: the Alkor repair shipyard and our capabilities when it comes to new constructions - said the CEO of Safe, Marek Siemaszko. - I hope that what we talked about during the conference will come true and we will get a chance to participate in a new hand in terms of the possibilities of the shipbuilding sector.

- Design offices showed their best. We can design various types of ships. We all know each other here - and what is very important - we are able to cooperate - commented Tomasz Świątkowski, President of the Management Board of StoGda, after receiving the award.

The Nauta repair shipyard, which is celebrating its 95th anniversary, also received a special award.

- We are glad that we are celebrating in such a noble group of people from the industry - said Monika Kozakiewicz, President of the Board of the shipyard.

- The jubilee is even more enjoyable because the company is doing very well, we are having many orders. New perspectives are opening up for us, we are curiously watching the development of movements related to sea wind farms and we want to participate in them. We have already dealt with, among others, modernization and reconstruction of vessels.

Another distinction, for the investment of the year, was received by the Port of Gdynia Authority. This time the dedicated Public Ferry Terminal was appreciated.

- Our terminal has been noticed by the industries and it is extremely pleasing. Through this investment, we create conditions for the shipping and shipbuilding industry, as well as the broadly understood maritime business - said Dominik Sychowski, Deputy Director for Real Estate and Agreements at the PGA.

Let us remind you that the Lighthouse of „Gospodarka Morska” awards were presented for the second time. This year's edition of the competition enjoyed record popularity. A total of nearly 55,000 votes were cast, of which as much as 69 percent was for the StoGda company and 30 percent for the Safe shipyard.

- The aim of the award is to promote companies that may not be the greatest, but their achievements on a European scale make them eligible for the award. All PFTM members had the right to enter the competition. What distinguishes the award is the fact that the nominees by the jury are assessed by a wide group of readers of the GospodarkaMorska.pl portal - said Jerzy Czuczman, president of the board of the Polish Maritime Technology Forum (PFTM), which was one of the main partners of our cruise.

- The conference at sea turned out to be a very successful initiative. Behind us are three days of debates, talks, exchange of views and the award ceremony of Lighthouses of the „Gospodarka Morska" during the gala. I sincerely congratulate all the winners as the organizer. I would also like to thank all the participants and I am declaring the organization of another conference at sea next year - summarized Mateusz Kowalewski, publisher of the portal GospodarkaMorska.pl.

The next Cruise from GospodarkaMorska.pl will take place in October 2022.