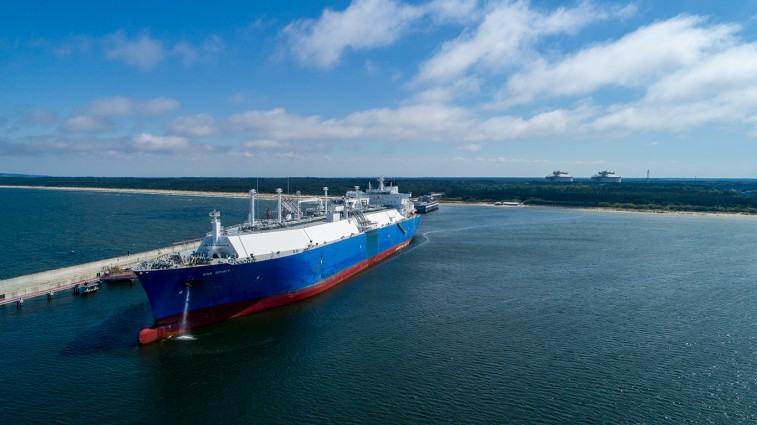 Shipyards
American gas was sold from Poland to Ukraine. PGNiG and ERU transaction

Polskie Górnictwo Naftowe i Gazownictwo (PGNiG) purchased a liquefied natural gas (LNG) load from the USA, and then - after regasification – will sell it to Energy Resources of Ukraine (ERU). Due to the consistent expansion of the LNG supplier portfolio, PGNiG has the opportunity to offer natural gas to other customers.

The methane ship with the purchased cargo will arrive at the LNG Terminal in Świnoujście at the beginning of November 2019. Liquefied natural gas after regasification will be injected into the Polish transmission system in Świnoujście, and then transferred to Ukraine via the border gas pipeline connection in Hermanowice to ERU. Delivery to the Ukrainian partner will be carried out by the end of 2019.

- Over the past three years, PGNiG has built up extensive competences on the LNG market. We have the opportunity to buy LNG on competitive terms from reliable suppliers from around the world. We also have all the capacity at the terminal in Świnoujście (we expect 39 deliveries next year) and the available capacity in the gas pipeline system in Poland and on its borders. This makes PGNiG a natural partner for cooperation in building a modern and secure gas market in our part of Europe. Several years of cooperation with our partners from the Ukrainian ERU is the best proof of this - said Piotr Woźniak, president of PGNiG. - Currently, the only limitation in the development of exports to Ukraine on an even larger scale is the capacity of gas pipelines in Poland in the direction of Silesia - Podkarpacie. We expect to expand the capacity of these gas pipelines by 2021 at the latest - added Woźniak.

Imports of liquefied natural gas to Poland are growing dynamically. While in 2016 LNG accounted for about 8.5 percent in the entire import structure, in 2018 it was over 20 percent. Since the opening of the terminal in Świnoujście, PGNiG has already received nearly 70 LNG loads with a total volume of approx. 7.5 billion cubic meters. after regasification. More and more loads are coming to Poland from the USA. While in 2018 PGNiG accepted one spot delivery of American LNG, by the end of August 2019 it had already received four spot deliveries, and moreover one under a medium-term contract and one under a long-term contract.

- We maintain the reputation of pioneers in the implementation of the most ambitious tasks in the regional energy sector. Thanks to cooperation with our Polish partner, we are making visible breakthroughs in the construction of the transatlantic gas supply corridor from the USA to Ukraine - said Dale Perry, president of ERU Corporation.

- We contracted this load to put it into the system and store it for later delivery to consumers in the winter season. In this way, we contribute to the country's energy security during the uncertain and particularly risky winter of the turn of 2019 and 2020 - said Yaroslav Mudryy, director of ERU TRADING LLC. - In this case, given the well-developed gas transport system, Ukraine does not have to be the last destination of US LNG. It can be successfully delivered to countries such as Hungary, Romania and even Moldova - he added.

PGNiG and ERU have been cooperating for several years. In August 2016, PGNiG exported gas to Ukraine, where the recipient was just a Ukrainian trading partner. In the past, both companies jointly supplied natural gas for the needs of the Ukrainian transmission network operator and warehouses Ukrtransgaz.

Energy Resources of Ukraine (ERU) is a group of companies with foreign investments specializing in the development of energy projects in Ukraine. From 2016 to the present, the Ukrainian trading company ERU Trading, a subsidiary of ERU Corporation, holds a leading position among private importers of natural gas. In July 2019, ERU Trading became the first company to import electricity from Europe to Ukraine.