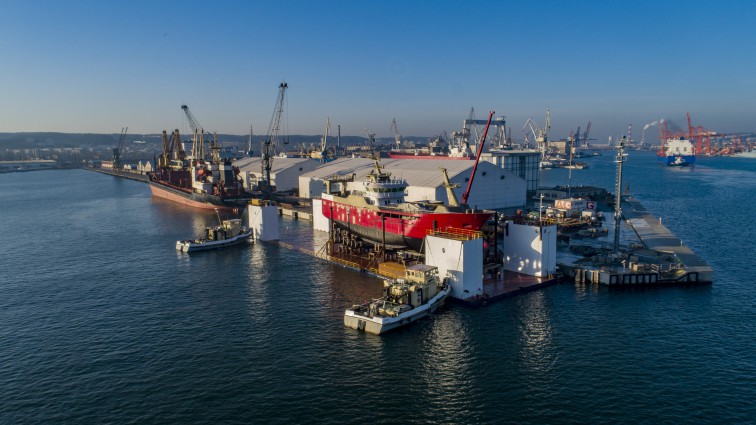 On December 19, Karstensen Shipyard Poland started a two-stage launch operation of the Kristin trawler with construction number 446. The partially equipped unit will go to the Karstensens Skibsværft A/S shipyard in Denmark, where it will be finish and retrofit, and will undergo start-ups and sea trials.

Kristin trawler was ordered by a German shipowner from Cuxhaven. He was launched in two stages. First, the unit was moved from the Indian Quay using a multi-wheeled platform for heavy and bulky loads SPMT and then placed on a semi-submersible barge pontoon Tronds Barge 30. After towing, the operation of proper launching was carried out at the Romanian Quay.

Karstensen Shipyard Poland builds ships at the Port of Gdynia in a modern production plant acquired from Vistal Offshore. It is located at the Indian Quay, and was put into operation in 2013. It is adapted to the production of hulls, consists of two well-equipped, modern halls with dimensions: 200x30x30m and 150x30x20 m, as well as adjacent offices and facilities for staff. Karstensen officially took over the plant on July 1, 2018, under a three-year lease agreement.