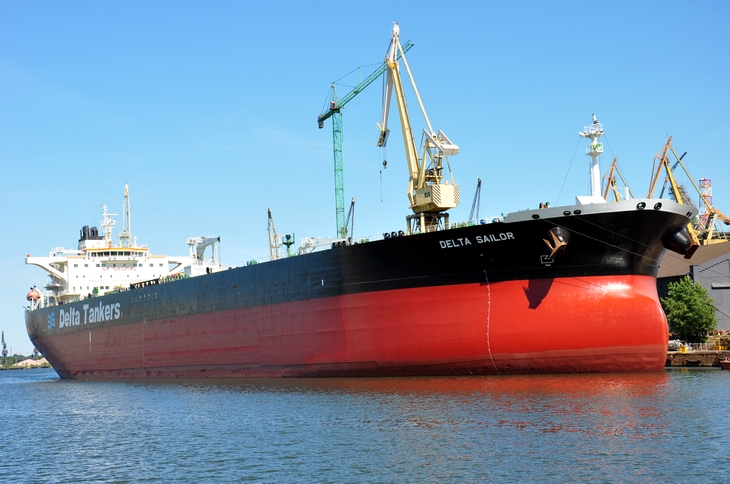 Over the recent months and years the yard repaired several tankers, operated by Greek owners, being large as for Remontowa\'s facilities. Wide-bodied tankers have arrived at Remontowa sent, among others, by Athens based Delta Tankers - the company Remontowa has been fruitfully co-operating for a couple of years.

Four years ago Gdansk saw Delta Captain, Delta Sailor and Pelagos undergoing class renewal repairs. Last year Delta Pioneer was repaired and refreshed for Delta Tankers at Remontowa. Delta Captain arrived at Remontowa this year in April, again, for class renewal repairs followed in May by Delta Sailor (on the picture above). Recently, sister vessel Deep Blue was undergoing repairs at our yard (on the picture below), with another wide beam Greek tanker awaited.

Also the Deep Blue (ex Delta Blue) belongs to the most popular class of tankers, the aframaxes, ranging 80 up to 120 thou. tons in deadweight, able to call to most of the oil terminals worldwide. They are usually operated on the routes linking Venezuela, East Coast of Mexico, USA and Canada and the countries of North-East Europe and Mediterranean.

Stern tube seal has been replaced with a new one (including oil replacement, machining, etc.). Lifeboat davits, lifeboats, main engine air cooler (workshop overhaul, cleaning and pressure tests) have also been specified for overhauls. Outlet sea valves have also been examined, so have been rudder, hose cranes and side gangways. Of steel works an insert of a new part of bow structure, port side is worth mentioning.

On such a ship, relatively large one, there is always plenty of maintenance and painting works. On the outer hull, some four or five layers are applied. A big ship means significant renewal of surfaces, eg. flat bottom features 7300 m2, sides from bottom to highest "wet" level - 8400 m2 and the freeboard zone - 4100 m2). The maintenance and painting is performed by Remontowa Coating & Equipment with support from subcontractors