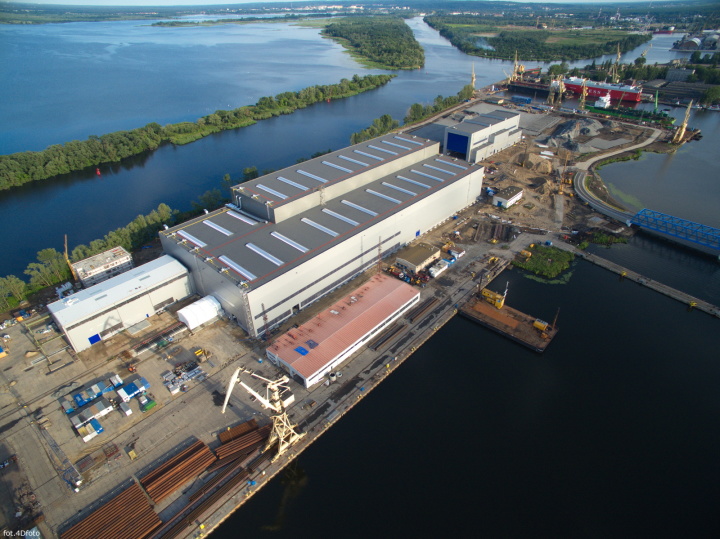 In September 2015, Bilfinger Mars Offshore (BMO) will start the production of 91 Transition Pieces (TPs), for the Race Bank offshore wind farm in the North Sea. The contract partner is Denmark based, DONG Energy, a global leader in the offshore wind, and the Race Bank work is the first large contract awarded to BMO.

During a 6 month bidding period, DONG Energy assessed the new Bilfinger Mars Offshore manufacturing plant in Szczecin, Poland, and judged BMO to have the best tender submission on both technical and commercial merits. Negotiations were intensive and DONG Energy visited the site in Szczecin, three times to get familiar with the new serial manufacturing plant being built on the Ostrów Brdowski island (north district of Szczecin).

Bilfinger Mars Offshore was in competition with two of the largest offshore wind foundation manufacturers. Finally, Bilfinger Mars Offshore’ bid won the Race Bank TP tender. “It is a huge success” – said Dirk Kassen, chairman of the board of Bilfinger Mars Offshore – “We have worked very hard during this last year. Throughout factory construction, we had to prove, we are able to produce significant numbers ofhigh quality foundation elements. During site visits, we became trustworthy for our contract partner – and trust in business is normally built up over many years”. The DONG team expressed satisfaction with the BMO bid, stressing professionalism of company, attention to detail, serial manufacturing and the positive attitude toward the client, as key bid features.

The new contract will involve the manufacture and storage of 91Transition Pieces (TP) from base steel plate for the primary can structure, additional secondary steel fittings and concrete platformcasting and installation. TP Secondary outfitting includescorrosion protection (coating), fabrication and assembly of concrete external platforms, assembly of client issued components, electrical outfitting and assembly of anodes. Finally the TP foundations will be loaded onto barges for transportation or stored until required by DONG Energy.

This historiccontract for BMO, that is planned to run from July 2015 to December 2016, is expected to load out the first TPs during June 2016.

Piotr Słupski, chairman of the board of MS Towarzystwo Funduszy Inwestycyjnych, managing MARS Closed-End Investment Fund (shareholder of BMO) said: We are very happy about Bilfinger Mars Offshore’s successful tender for Race Bank. This is the next important step in the process that we started two years ago when construction began on an unexploited area of the Gryfia Shipyard. This is a very important moment for the Westpomeranian region as soon this large scale development will employ hundreds of people.

Prior to load out, the TPs will be stored adjacent to the productionand painting halls. The finished TP’s will be loaded on the barges by one of Europe’s largest gantry crane – about 110 m high, with a hook height of 95m, and 1400 t lifting capacity. The new BMO gantry crane will be visible from almost everywhere in Szczecin and will tower above the current shipyard cranes that are typically 80m high, with maximum load 450 t.

DONG energy specialists will supervise the fabrication process; a standard practice for this type of contract.

The TPs produced by Bilfinger Mars Offshore will be installed on the 580 MW Race Bank OWF locatedapproximately 27 km off Blakeney Point on the UK’s North Norfolk coast.Race Bank will be developed and operated under the UK government Renewable Obligation Scheme (ROC). Race Bank OWF, that is expected to be fully operational during 2018, will be able to meet the energy requirements of more than 400,000 households.