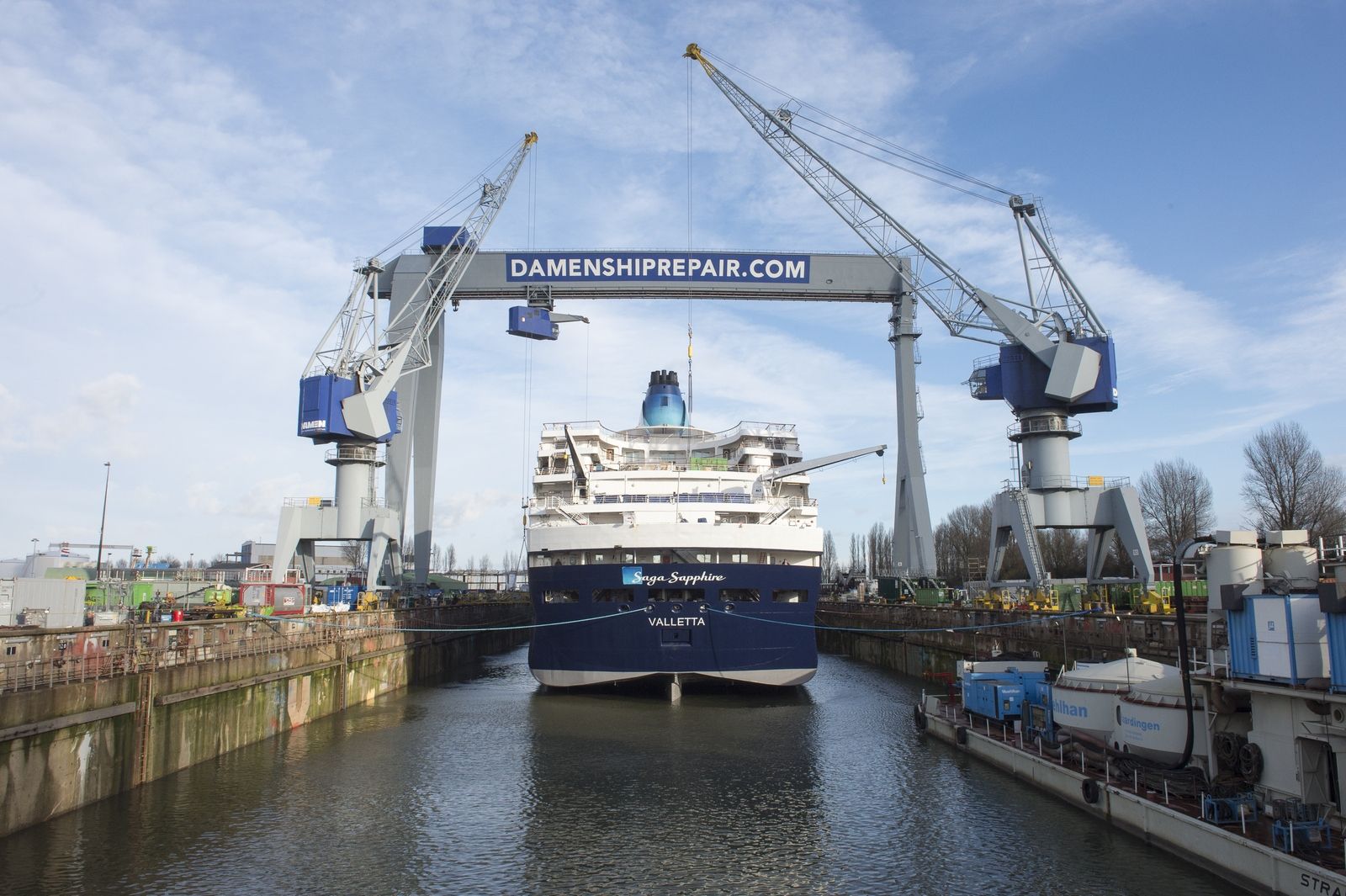 19 December, the Saga Cruises-owned Saga Sapphire left Damen Shiprepair Rotterdam (part of Damen Shiprepair & Conversion) after receiving extensive repair and refurbishment works as well as a scheduled Class Survey. The 199.63 metre vessel is now back in action, picking up passengers from Dover before heading for the Canary Islands in time for Christmas. This latest contract signifies a period of back-to-back cruise ship repair projects that also includes work carried out on a 300 metre vessel that left the yard last month.

As is customary with cruise ship repair projects, the Saga Sapphire contract involved a tight time frame that required precision planning from Damen’s project management team. “Considering the time frame and the age of the vessel, this was a challenging refurbishment project”, says Damen Shiprepair & Conversion’s Cruise Vessels Product Manager Khalil Benjelloul. “But we completed the work successfully in the scheduled 19 days. With Damen’s own personnel and subcontractors working to such a tight schedule, an important issue with this project was an efficient interface between tasks.”

“It’s all about good planning,” says Paul Ippel, Area Sales Manager/ Project Manager at Damen Shiprepair & Conversion. “We broke the whole project down into a step-by-step programme. The team was headed by four project leaders, each with his own area of responsibility.”

The most challenging item on Damen’s to-do list was replacing the vessel’s two sewage plants. “To get to the sewage plant, we had to go through the hull and the engine room bulkhead,” informs Mr Ippel. “This involved a lot of coordination between various sub-contractors.”

With such major works being carried out on the sewage and grey water system and the fresh water tanks also being blasted and repainted, Damen had to take into account the 425 people, consisting of the vessel’s own crew and the owner’s subcontractors who stayed on board for the duration of the repair project. To meet this particular challenge, Damen provided the Saga Sapphire with a drinking water supply from shore in addition to grey water disposal during its stay at the yard.

Damen’s scope included repairs to the deck steel work and a comprehensive overhaul of the lifeboats and their davits. Further work included general repairs to the vessel’s piping, electrical and hydraulic systems. Damen Shiprepair Rotterdam used its biggest dry dock – the 307 metre number 8 dock – to house the Saga Sapphire during the repair works.

“On a big project like this, comprising 224 planned items that included over 600 separate tasks, efficient communication is of the essence. It goes without saying that this includes good communication with the client,” continues Mr Ippel. “It was a complicated and challenging job but it is great to see another cruise ship repair project finished on schedule.”