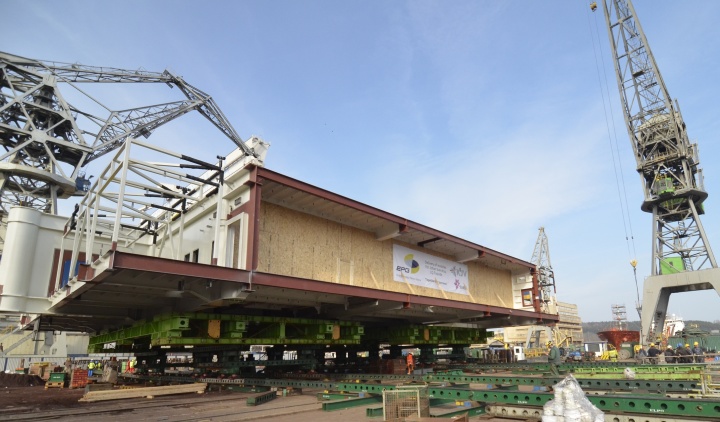 The module will be a part of the Johan Sverdrup utility and living quarter platform. Construction weights about 1000 t and its dimensions are 55 x 40 m. Giant structure has been paced onboard heavy load carrier MERI with using of hydraulic skidding system.

Modules were produced for consortium K2JV joint venture between Kvaerner Stord i Kellog Brown & Root).  Including two modules, which Energomontaż-Północ Gdynia has already delivered to the contractual partner  in the first quarter of this year, all elements dedicated to this project weigh almost 3000 tons.

Johan Sverdrup is the biggest project which we have performed in recent months - said Bartłomiej Kwiatek, Project Manager. Participation in such large projects is very important for us, because it gives us prestige as well as the opportunity for cooperation with the biggest players in the offshore industry – added Mr. Bartłomiej Kwiatek.

Johan Sverdrup is the oil field in the North Sea, about 140 kilometers west of Stavanger. The field is one of five largest oil fields on Norwegian Continental Shelf. Daily production during first phase estimated at 440,000 – 650,000 barrels per day. Peak production will be equivalent to 40% of all NCS petroleum production.