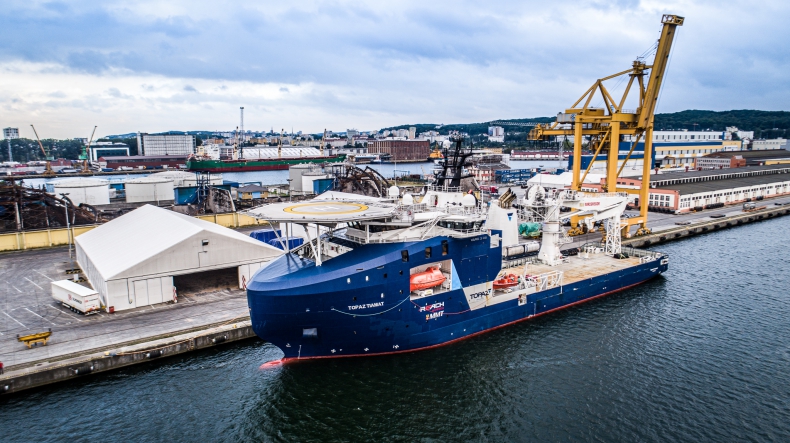 Two years ago, Equinor and Polenergia started cooperation on the construction of two wind farms in the Baltic Sea, located approximately 27 and 40 km from the port in Łeba. The cooperation was organized in the following companies: Morska Farma Wiatrowa Bałtyk II (OWF Bałtyk III) and Morska Farma Wiatrowa Bałtyk III (OWF Bałtyk III), in which Equinor and Polenergia each have 50% of shares. In recent months, underwater research of the seabed has been carried out in the area of future farms.

Measurements were made using a specialized vessel Topaz Tiamat, for which the Gdynia port became a logistics base. Work began in mid-August and was completed in the last days of September. According to information posted on the VesselFinder website, Topaz Tiamat moored in Gdynia on August 26 and on September 8 and 23.

Since 2019, the vessel has been chartered by the Norwegian company Reach Subsea and MMT from Sweden from the shipowner Topaz Energy and Marine. As part of the charter, Reach and MMT use Topaz Tiamat for seabed surveying, underwater work, inspection, maintenance and repair of offshore pipeline installations as well as less complex construction work.

The Marshall Islands Topaz Tiamat is a DP2 Survey (dynamic positioning class) and ROV Support Vessel (a platform for remotely operated underwater vehicles) designed specifically to serve the offshore subsea market. It is 98 m long and 20 m wide. It was built at the Vard Brattvåg AS shipyard in Norway and put into operation in January 2019. It is equipped with a 120-ton crane and integrated hangars with two underwater robots. Thanks to the special shape of the hull - it can work in difficult weather conditions.

Equinor and Polenergia each hold 50% of shares in the companies Morska Farma Wiatrowa Bałtyk II (OWF Bałtyk III) and Morska Farma Wiatrowa Bałtyk III (OWF Bałtyk III). The commencement of construction depends on obtaining the necessary permits and is scheduled for 2025/2026. The generation capacity of both farms is to amount to 1,440 MW, which will allow electricity to be supplied to over two million households. The final investment decision for these projects requires obtaining the necessary permits and is planned for 2023, which will enable the first electricity to be delivered to the grid in 2025.

In December 2019, Equinor acquired 50% of shares from Polenergia in the third Morska Farma Wiatrowa Bałtyk I project (OWF Bałtyk I) with a planned capacity of 1,560 MW.

As the vice president of Equinor, Jens Okland, commented at the time: "The acquisition of the Baltic I strengthens our presence in the Baltic Sea. With participation in all three projects, we have a chance to increase the scale of operations in an area that we consider important in terms of energy."

The recently signed "Baltic Declaration for Offshore Wind Energy", which inaugurates close cooperation between the countries of the Baltic Sea region, can inspire optimism in the matter of offshore wind farms in the Baltic Sea. The aim of this cooperation is to accelerate the development of wind power in the Baltic Sea, to coordinate and optimize activities leading to the full use of the energy and economic potential of the sea.

It is about cooperation in the field of maritime spatial planning, as well as network development, power planning and support mechanisms. All these elements will be crucial for building a well-functioning internal energy market and cross-border infrastructure, unlocking the full energy and economic potential of the Baltic Sea.

“I am glad that with the support of the Polish wind industry, the countries of the Baltic Sea region have agreed to further strengthen energy cooperation. Our goal is to create favorable conditions for the development of offshore wind energy to ensure sustainable, reliable and cheap energy supplies in the Baltic Sea countries, ”said the head of the climate ministry, Michał Kurtyka, on the occasion of signing the declaration.

The Minister of Climate drew attention to the large energy potential of the Baltic Sea, estimated by WindEurope at 83 GW, and, according to the European Commission, even exceeding 93 GW in 2050 (depending on the methodology used). Thus, this reservoir will become the second largest reservoir in Europe in terms of offshore energy potential, right after the North Sea.

"Poland has a chance to become a leader in the development of offshore farms in the Baltic Sea with the target installed capacity potential estimated in the WindEurope report at 28 GW in 2050. This is one-third of the capacity that may be generated in this reservoir" - he emphasized.

The minister also emphasized that the Baltic region will be a particularly attractive area for locating plants producing elements of sea turbines in the future.

"In Poland, the biggest beneficiaries will be, among other shipyards, steel and metal industry; service and installation companies will also flourish. We must use their competences and experience to build the value of the Polish, low-emission, innovative economy, which is crucial, especially in the era of slowdown caused by a pandemic,"he noted.

The vice-president of the board of the Polish Wind Energy Association, Kamila Tarnacka, pointed out that the ambitious approach to building offshore wind farms in the Polish waters of the Baltic Sea is the key to maximizing economic benefits.

“Using the largest wind energy potential in the Baltic Sea, we can build a new branch of the economy around the emerging sector and specialize in the production of selected elements of offshore turbines. There is hope that offshore wind will become our export specialty, and Polish companies will be strong links in international offshore supply chains, ”she said.

According to PWEA vice president, using the full energy potential of the Baltic Sea and obtaining as much energy from the sea as possible at the cheapest cost would not be possible without initiating multi-level cooperation between the countries of the region.