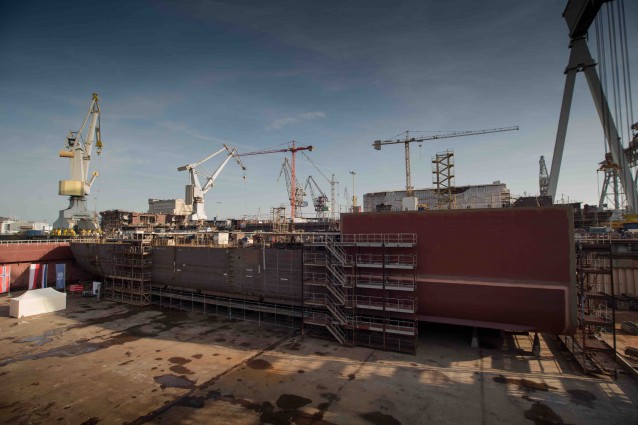 A Grand block ceremony for the construction of a partly equipped cable laying vessel for the Norwegian shipowner (Nexans Subsea Operations AS) took place on Tuesday in CRIST shipyard.

NB 314 Nexans Aurora, equipped with a DP3 dynamic positioning system, is a purpose design ST-297 CLV (Cable Laying Vessel) developed by Skipsteknisk AS from Ålesund, Norway. The vessel is designed to offer market leading capacities for worldwide operations in connection with the Nexans group Submarine Cable and umbilical activity.

The advanced unit will be 149,9 m long, 31 m wide with a deadweight capacity of 17000 t and accommodating 90 crew in total. The unit will be equipped with a dedicated split turntable with 10000 t capacity as well as a coiling tank of 450 t. The vessel will be used to transport and install submarine high voltage cables and umbilicals with associated equipment from shallow to deep waters.

The unit will be built at the CRIST shipyard, the final outfitting, commissioning and testing will be carried out by the Norwegian shipyard Ulstein Verft AS, while the final recipient is Nexans Subsea Operations AS from Norway. Nexans brings energy to life through an extensive range of advanced cabling systems, solutions and innovative services. For over 120 years, Nexans has been providing customers with cutting-edge cabling infrastructure for power and data transmission. Nexans employs nearly 27,000 people with industrial footprint in 34 countries and commercial activities worldwide.