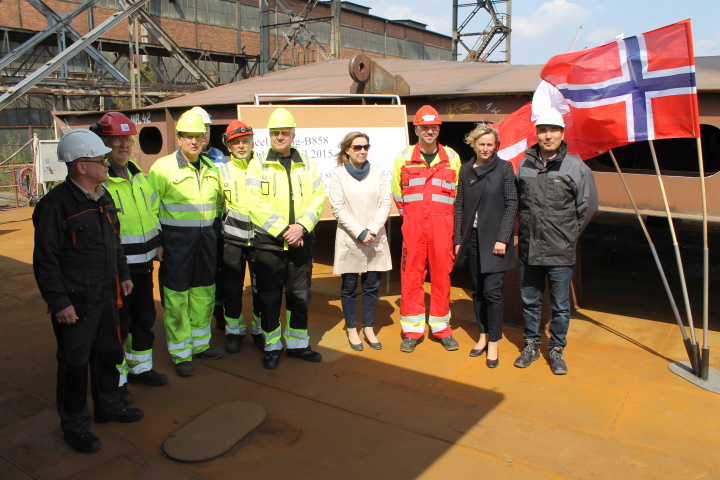 On 30th April, 2015 a ceremony of keel laying was held at the premises of Nauta Shiprepair Yard in Gdańsk. The unit will operate on Dudgeon wind farm, outside the coast of Norfolk in Great Britain.

According to the contract the unit is scheduled for delivery to the customer in November 2015. The ship will be over 83 m long and 18 m wide. The vessel has been developed by Havyard Design & Solutions. The ship\'s main job will be to provide accommodation for and carry personnel and equipment for the performance of service and maintenance on offshore windmills. Among other things, this means that the ship has a specialised gangway system that makes it possible to transfer personnel from the ship to the windmills in harsh weather conditions. Otherwise, emphasis has been placed on good facilities and comfort for the personnel on board, the ability to stay in position by the windmills, and environmentally friendly and economical transit between onshore bases and the windmills offshore. Vessel has a foreship designed to have good properties in both calm and rough seas and a stern with twin skegs that improve the performance of the hull and propellers and their operating economy.

Danish company ESVAGT will be the vessel operator. ESVAGT operates in the fields of emergency response and anchor-handling vessels, safety training, oil spill response and personnel transport and service for offshore accommodation modules and wind farms. ESVAGT has a fleet of 39 ships and additionally five newbuilds, including the three vessels under construction at Havyard.