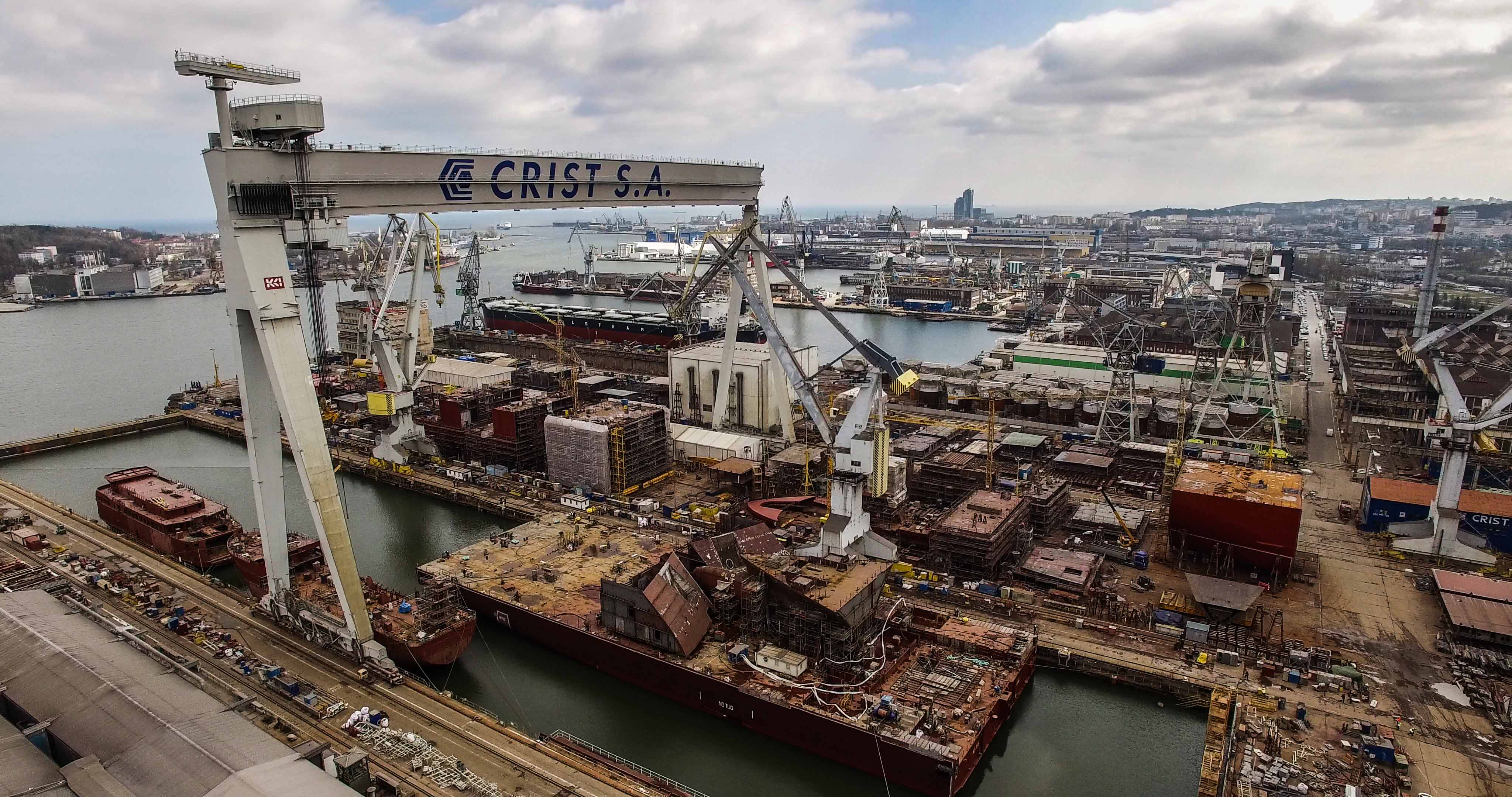 Crist shipyard delivered huge, partly equipped block together with 3 sections of the forebody. A gigantic set he was towed from the shipyard by a Bugsier 9 tugboat and set off towards the STX France shipyard in St. Nazaire.   Giant elements are the key parts of the design of the first Meraviglia-Plus class passenger ship for the MSC Cruises operator. The unit is to be commissioned in October 2019. It will take over 6,300 passengers on board.   Launching of the giant block along with the sections took place in April at SDII dock in Crist Shipyard.

- 7.5 thousand t of steel, 30 km of pipelines to be layed, 80 thousand m2 of surface to be painted, approx. 700 shipments to be installed. The figures I have presented show the scale of the undertaking with which we had to deal. Many times it surpasses the scale of entire projects carried out in Polish shipyards - said Mikołaj Kulczycki, project manager at the CRIST shipyard.

The megablock with the construction number NB G34, is 124.5 m long, 43 m wide and 8.5 m high. It weighs about 6 700 t plus equipment. Part of the block's power plant is fully equipped, without cables or starting up.
The Bugsier 9 tug is 32.00 m long and has a lift of 85 tons. At the exit from the port it was assisted by Fairplay tugs. It is worth noting that at the end of last year, the Bugsier fleet was included in Fairplay Towage, retaining its brand name. Thanks to this merger, the Fairplay Towage Group  currently has over one hundred towing units and has clearly strengthened its position in Northern Europe.

Transporting the set to France is carried out by Morska Agencja Gdynia Sp. z o.o.

MSC Cruises biggest passenger ships  The operator MSC Cruises ordered two Meraviglia-Plus cruise ships. The first of them, which part  is created in the CRIST shipyard, is MSC Grandiosa. The second, MSC Bellissima, will be put into operation in July 2020. Passenger ships will be 331 m long, 43 m wide, 181,000 GT and will reach the speed of 23 knots. They will take 1 700 crew and 6 334 passengers on board, for 2 444 cabins will be built. Units will have 19 decks. The latest technologies are used for their construction, taking into account environmental protection as well as passenger safety and comfort.   There are plenty of attractions prepared on the MSC Grandiosa. This includes the first art museum on the sea, a two-level entertainment park, 4D cinema, aqua park, over 100-meter promenade with restaurants and shops, and Cirque du Soleil at Sea performances.

The first cruise of MSC Grandiosa is scheduled for November 2019.

CRIST is currently one of the largest Polish shipyards. During its twenty-eight years of activity, it has achieved the position of one of the leading manufacturers of specialized shipbuilding equipment and vessels for the largest global recipients. The shipyard concentrates its development around the construction of specialized ships and structures for the maritime industry.

STX France is a shipyard located in Saint Nazaire, a leading European manufacturer of large cruiser passenger ships, which has in its portfolio, among others, France, Queen Mary 2, Oasis of the Seas and Allure of the Seas.