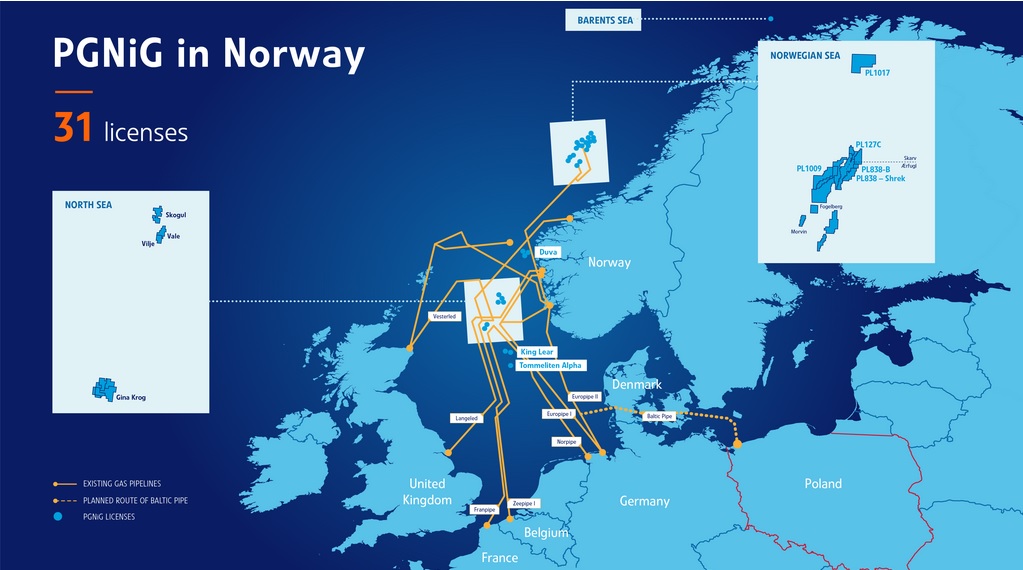 Polish Oil and Gas Company’s subsidiary PGNiG Upstream Norway has closed a transaction of February 2020 to purchase interests in two more fields. For PGNiG this means more own gas volumes, which are soon to flow to Poland via the Baltic Pipe.

PGNiG has increased its stake in the Gina Krog field (licence PL127C) to 11.3% and has purchased an 11.92% interest in the undeveloped Alve Nord field (licence PL127C). PGNiG Upstream Norway estimates these acquisitions will increase the company’s future gas production by 100 mcm a year. With the transaction with Aker BP closed, the number of licences on the Norwegian Continental Shelf in which PGNiG Upstream Norway holds an interest has increased to 31.

‘We are thrilled that our latest acquisitions on the Norwegian Continental Shelf coincided with the commencement of construction work on the Baltic Pipe. The pipeline will carry natural gas produced by PGNiG from Norwegian fields to Poland starting from 2022, with the gas volumes rising as we complete further acquisitions and more fields enter the production phase,’ noted Jerzy Kwieciński, President of the PGNiG Management Board.

Gina Krog is an oil and gas field that has been in production since 2017. The field produced 19.9 mboe in 2019, of which 1.6 mboe was attributable to PGNiG. Recoverable Gina Krog oil and gas reserves are estimated at 172.5 mboe. Licence PL127C, covering Alve Nord, is located in the area of the Skarv oil and gas field, therefore PGNiG expects to discover natural gas there as well.

PGNiG Norway Upstream is currently producing oil and gas from seven fields on the Norwegian Continental Shelf. Production has started from Skogul and Ærfugl earlier this year. The acquisitions made over the last three years have increased PGNiG’s proved reserves in Norway from ca. 80 mboe to ca. 200 mboe.