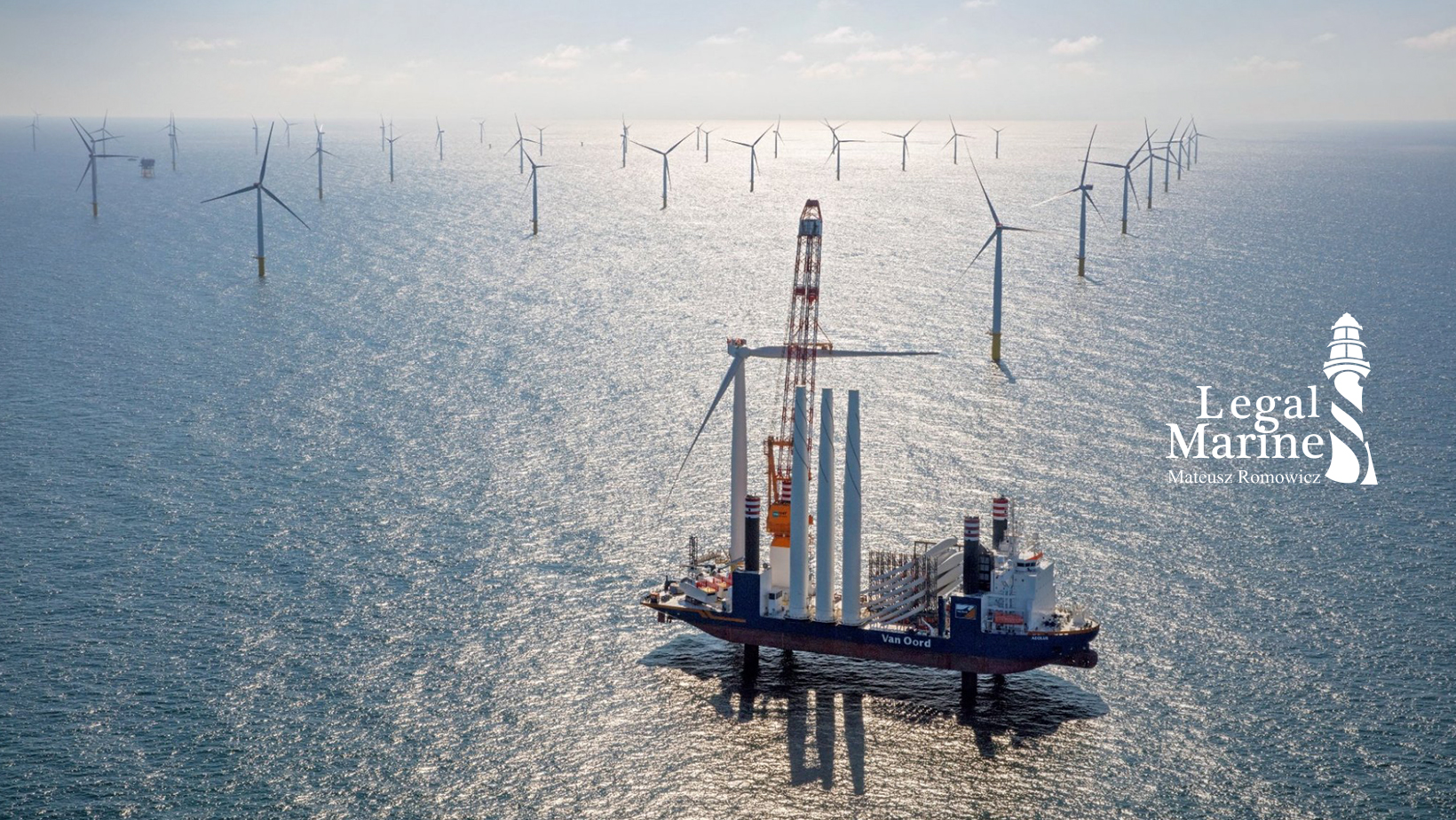 Shipyards
Offshore wind farms: when poised to take off in Poland? – the legal aspect

On the occasion of many previous publications concerning offshore wind farms, numerous factual and legal problems, which are becoming increasingly serious obstacles to the efficient development of the Polish offshore market, were pointed out. There is no doubt that this market has a huge business potential, which in the face of more and more dynamic development of green energy may turn out to be crucial for the Polish offshore sector.

It is also not surprising that many entrepreneurs from the industry, ports, academic centres, local governments and other entities, which will be directly or indirectly connected with this sector of economy, are very enthusiastic about it.

There are a few key issues presented in the following article, which may significantly delay the launch of the first Polish offshore wind farms. They are expected to generate electricity in 2026.

It is important to note that the first Polish offshore wind farms will be built in the contiguous zone, introduced to the International Law of the Sea by the United Nations Convention signed in Montego Bay (Jamaica).

It should be clarified that the contiguous zone is part of the Polish exclusive economic zone, where the outer limit extends no more than 24 nautical miles from the baselines, which is nearly equal to 44.5 km. In the contiguous zone, the Republic of Poland shall have the rights to prevent infringement of Polish customs, fiscal or sanitary regulations and regulations concerning illegal migration, within its territory, as well as to pursue, seize and punish perpetrators of an infringement of regulations mentioned above when the infringement took place in the Polish land territory, internal waters or territorial sea of the Republic of Poland. Moreover, this right may be exercised in the case when the duty to pursue, seize and punish perpetrators by the European Union law or international agreements, to which the Republic of Poland is a State Party.

On the other hand, in the exclusive economic zone, the Republic of Poland has sovereign rights for the purpose of exploring, conserving and managing natural resources, whether living or non-living, of the waters superjacent to the seabed and of the seabed, as well as protecting these resources, and with regard to other activities for the economic exploitation and exploration of the zone. In addition, Poland in these maritime areas has authority over the establishment and use of artificial islands, installations and structures; marine scientific research; and the protection and preservation of the marine environment.

Referred to Article 22 of the Act concerning the maritime areas of the Republic of Poland and maritime administration, the Republic of Poland shall have the exclusive right to construct, or to authorize and regulate the construction and utilization of artificial islands, installations and structures of any kind intended for the conduct of scientific research, exploration or exploitation of resources, as well as with reference to other undertakings in the field of economic exploration and exploitation of the exclusive economic zone, in particular the use of water, sea currents and wind for energy purposes. In addition, all the constructions indicated above shall be subject to Polish law.

What is more, the statutory delegation authorizing the establishment of safety zones with limited right to sail, fish, practice water sports or diving or underwater work, seems to confirm the exclusive jurisdiction of the Polish state in the offshore wind farms area. According to Article 24 of the Act concerning the maritime areas of the Republic of Poland and maritime administration, around the artificial islands, installations and structures or their complexes, understood as a group of artificial islands, structures or devices located not further than 1000 m from each other, the director of the competent maritime office may establish safety zone extending not more then 500 meters measured from each point of their outer edge, unless a different width of the zone is authorized by the generally accepted standards of international law or recommended by the competent international organization.

The above is important, because offshore wind farms, despite being located outside the territory of the Republic of Poland, will be treated as if they were located in the territory, with all the rights, obligations and privileges resulting from this fact.

A key issue is to determine the exact location of these threats, as current information in this regard may be very outdated.

Appropriate procedures and methods for seabed clearance of these unexploded ordnance and chemical weapons must then be defined in order to minimize the risk to the marine environment and to those involved in the clearance operation.

Another equally sensitive issue is the funding of the entire project, which may prove to be very expensive. Unfortunately, to date Poland has not received confirmation from the EU that it will receive such support. Thus, at present, everything points to the fact that Poland's application in this area will be refused.

It is difficult to determine the costs associated with the aforementioned 'clean-up', but they will certainly be multimillion sums. In such situation a key problem arises: who will cover these costs?

Unfortunately, these problems are omitted in many business models by entities directly related to the offshore market and interested in launching offshore wind farms in Polish maritime areas.

As the name suggests, the act is aimed at "promoting" electricity in offshore wind farms and not at systemic and multifaceted regulation of legislative gaps concerning offshore wind farms. Many Polish offshore stakeholders have mistakenly perceived this act as fundamental and solving most of the legal problems concerning OWF.

Let us remember that the main reason why the aforementioned law was enacted was the need to meet EU targets related to renewable energy sources. Directive (EU) 2018/2001 of the European Parliament and of the Council of 11 December 2018 on the promotion of the use of energy from renewable sources obliges the Republic of Poland to maintain, after 2020, a mandatory share of renewable energy sources in gross final energy consumption at a level not lower than 15%.

It is also worth noting that before the Act on Promotion Electricity Generation in Offshore Wind Farms entered into force, the support system for renewable energy sources was regulated in the Renewable Energy Sources Act of 20 February 2015 (RES Act). However, these regulations were not adequate to the legal and actual situation of the offshore wind farms, which, according to the Act concerning the maritime areas of the Republic of Poland and maritime administration of 21 March 1991 (Journal of Laws – Dz. U. No. 32, item 131, as amended), may be constructed and exploited within the area of the Polish exclusive economic zone on the Baltic Sea. The inadequacy of this support system was due to a number of structural limitations related, among others, to the organization of competitive auctions. An additional procedural problem is the duration of the RES support system resulting from the Act of 20 February 2015 which ends in mid-2021, so it would be impossible to start investments related to the construction of OWF in Polish maritime areas without the introduction of new legal regulations.

The above-mentioned reasons of legal and factual nature were effectively blocking the investors interested in the construction and exploitation of offshore wind farms, therefore the issues presented above were the basis for separating the support system for offshore wind farms from the general RES system, introducing administrative facilitations in the investment process and incentives for the development of local supply chain.

According to Article 3(12) of the The Act of July 7, 1994 – Construction Law (Journal of Laws – Dz. U. No. 89, item 414, as amended), a building permit is an administrative document. It allows an entity to start construction of a building or realizing of construction works other than building.

Further provisions that are immanently connected to obtaining a permit for the construction of offshore wind farms and a set of power output facilities are the provisions of the Act of 18 August 2011 on Maritime Safety, in particular Articles 113b and 113c thereof.

It is worth explaining, that these regulations specify the types of expertise, which should be submitted for approval to the Director of the appropriate maritime office, the Minister of National Defence or the minister competent for internal affairs, respectively. Without fulfilling this requirement, no investor will be able to commence construction of an offshore wind farm in the Polish zone or adjacent zones.

Unfortunately, there is a very serious legal problem in this respect. Both articles 113b and 113c of the Act on Maritime Safety contain the statutory delegation for the Minister of Infrastructure and the Minister of National Defence, acting in agreement with the minister competent for internal affairs, authorizing these ministers to issue appropriate regulations in the above-mentioned areas. These regulations are to specify the detailed scope of the expertises and plans, as well as detailed requirements for qualifications and experience of the persons authorized to prepare them.

It is worth remembering that the publication of the regulation is only the final element, which must be preceded by an in-depth and multifaceted analysis of the issues regulated by the aforementioned legal act.

Offshore wind farm as critical infrastructure, but without adequate protection

It should be remembered that once offshore wind farms have been incorporated into the Polish power grid, they will become critical infrastructure and should therefore be adequately protected by the Polish state. In my view, there is still a great deal of work for the Polish legislator to be done in this regard, as the solutions currently adopted are simply ineffective.

Unfortunately, the key problem for the generally understood safety of ships and critical infrastructure in the Baltic Sea area under Polish jurisdiction has still not been resolved, i.e., the creation of a uniform service, such as the Coast Guard, which would operate on the basis of a unified and also international standard.

Alas, the authorities responsible for ensuring safety in Polish maritime areas have been significantly fragmented over several decades (Polish Navy, naval forces units, Border Guard, Maritime Offices, Chief Inspectorate of Sea Fisheries, SAR, Tax and Customs Service, waterway police). It is due to this fragmentation and sometimes overlapping competences that they are ineffective, and considering the size and sensitivity of offshore wind farms investments, this state of affairs is unacceptable.

It is necessary to urgently provide appropriate tools to the bodies currently forming the safety chain of Polish maritime areas through a number of legislative actions, so that the provisions concerning the safety of offshore wind farms are not virtual regulations.

In my opinion, we should strive to create a unified Polish service which, from the 'maritime' side, would combine all the necessary competences for securing the critical infrastructure that will be the offshore wind farm, e.g., as is the case with many European coastguards.

As the above discussion shows, the issue of the construction of Polish offshore wind farms is legally much more complicated than it may seem to many interested parties. Unfortunately, we are still functioning in a legal vacuum concerning, among others, the provisions necessary to obtain the permit for the construction of an offshore wind farm, concerning its safety, etc.

At the present stage, the Polish legislator should urgently strive to set up a panel of experts, which, drawing on foreign models and practical experience, would be able to lay the foundation for the necessary regulations that would actually enable efficient and safe activation and subsequent operation of the Polish offshore sector.

It should also be noted that a less complicated issue from the legal point of view, but of considerable factual importance is the method and the costs of cleaning the seabed from unexploded ordnance and chemical weapons in the locations where offshore wind farms are to be constructed. This issue, if left unresolved, may also become a "blockade" for the above-mentioned investments in the next years.