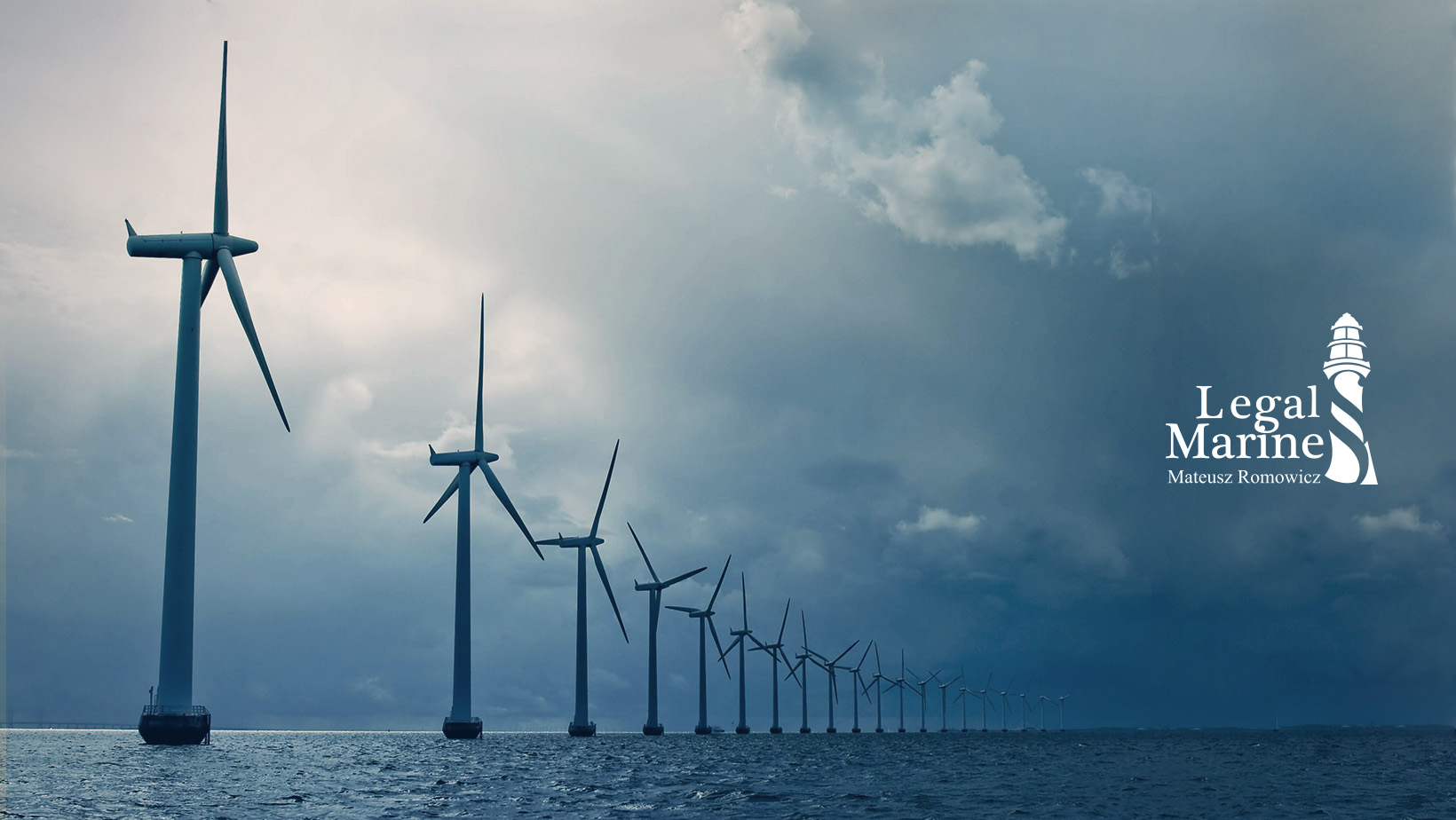 You start with a strong and unpopular claim – could you briefly justify it?

It is true that at a first glance the statement may seem even irrational, considering the narration dominant in the public sphere with regard to the Polish wind offshore power; unfortunately, in my opinion this is exactly the case.

Unfortunately, when discussing with numerous businesspeople and analysing the problem from a legal angle, I could not help coming to such conclusions. At present, there is much talk about visions, forecasts, plans and opportunities, but not about concrete legal solutions. Regrettably, such assurances are not followed by relevant actions that would coordinate work on this project, which is essential for the Polish offshore economy. What is more, to my surprise, some people claim that everything is ready to initiate specific processes concerning OWP in Poland… nothing could be further from the truth.

There are numerous factual obstacles, e.g. misfires and chemical weapons on the seabed of the Baltic Sea at sites where Offshore Wind Farms (OWFs) are to be located. From a technological point of view, they could be removed quite effectively, but there are still no final decisions or determined, although costly actions. This aspect has been discussed for a long time, but the problem has not been resolved yet.

Time is passing, and great many forecasts, completely detached from reality, indicate a date of launching first Polish OWFs at the end of 2026. I am an optimist by nature, but there are limits to my optimism. It is not physically possible to recognise this deadline as realistic. On the other hand, if we deal with such abstract forecasts and visions, I would control emotions about the Polish OWFs and any specific business plans related with them.

Interestingly enough, this is confirmed even by the Minister of Infrastructure himself, in the justification of the very unfortunate bill of a regulation concerning the assessment of applications in settlement proceedings, where in page 9 of the document he declares that in the case of offshore projects, the phase of preparation and contracting lasts about 6 years.

Another problem is the lack of any legal security for the Polish local content, or in other words for the Polish supply chain. Previous promises that such a legal ‘fuse’ will appear for Polish entrepreneurs, among other in the Offshore Act, have come to nothing. From the point of view of business and legal risks for Polish entrepreneurs, in particular in view of their intentional omission in investments in the Polish offshore wind power, a lot has to be done and done quickly.

In my opinion, we have not even started to secure such interests as the Polish state yet.

Is it really so bad as regards legal issues concerning the Polish offshore wind power?

To my mind, yes, because at this stage we can talk more about a type of marketing concerning OWP in these areas in Poland, rather than of any specific, actual and reasonably coordinated actions that would first and foremost create a safe legal environment for this sector in Poland. Even the name of the Offshore Act indicates that we are at the stage of ‘promoting’ this sector, but not a step further.

An excellent example is the draft regulation by the Minister of Infrastructure concerning the assessment of applications in settlement proceedings, which in fact promotes state companies, rather than private businesses in this sector. Well… interestingly, it promotes firms that have no experience whatsoever in the OWP sector. Are such firms, if they are ‘awarded’ in settlements proceedings, supposed to build the Polish OWP? Is the construction of such wind farms in the sea to be carried out without adequate knowledge, back-up, and experience in risk assessment involved in offshore projects? In my opinion this is utter nonsense and misrepresentation of the sense of Polish local content. Most probably, Polish decision-makers count on making foreign developers subcontractors for Polish state enterprises. And what if it does not take place? The present global development dynamics of the offshore wind power sector may lead to the massive deficit of units necessary to construct OWFs and their operation, not to mention service providers in this regard. From a purely business perspective, foreign developers may receive much more attractive offers, for example in the United Kingdom and the United States.

It is not a secret that Polish OWFs may be erected exclusively by foreign developers, because they have know-how and back-up necessary to do so efficiently and relatively cheaply. Therefore, I think that Polish decision-makers should really think over the adopted strategy, because at present there is more chaos than targeted actions aimed at securing Polish, or as some people prefer to say, national interests.


But aren’t Polish interests protected by the government resolution about the installation port in Gdynia?

Apparently yes. But one should keep in mind that a government resolution is not binding for OWF developers, firms that plan investments in Polish OWFs or entities that will later operate and maintain them. The construction of this port without securing adequately the Polish local content in projects related to the Polish offshore wind power may become another project similar to the construction of an airport in Radom.

There is a real risk that foreign ports, which are already operational and are as favourably located geographically to the sites of future OWFs, will prepare better offers than our domestic ports, which will result in ‘transferring’ this business out of Poland.

Considering the above-mentioned bill of ministerial regulation concerning applications in settlement proceedings, one may have an impression that orders for the Port of Gdynia are to be secured by Polish state developers, which seems to be unlikely, because as I have mentioned companies that are promoted in the drafted regulations will not be able to complete projects within OWFs by themselves, which may lead to a hazardous deadlock.


Where do you see the biggest problem as regards the Polish OWP?

There are plenty of such problems, but I think that the essential issue is the mental problem and not listening to signals that come from Polish entrepreneurs who are genuinely interested in relevant amendments to law.

Great many interesting ideas appear in discussions or at sectoral meetings, but the government circles operate as if in an alternative reality, almost completely ignoring such voices, as shown most vividly by the lack of any consultation when drafting regulations for this sector.

The present approach to OWP in Poland reminds me of bumpy roads after winter that are patched not very expertly, instead of replacing them with a new surface.

We urgently need constructive systemic changes that will not only concern directly the Polish offshore wind power but also other areas, e.g. the support for Polish shipyards.

For example, the Offshore Act and the Public Procurement Law have to be amended so as to secure the local content. Moreover, the Act on the activation of the shipyard industry and complementary industries needs to be changed, so that the Act actually supports smaller shipyards.

A number of organizational and legal changes should be introduced as soon as possible, for example with regard to security at sea. We do not have services that would be capable of protecting OWFs effectively at present. Sea services in Poland are too fragmented; therefore, their reform is needed.

We do not have a coastal guard service that could be quickly created by spinning off an offshore component of the Border Guards and ‘arming’ it with relevant competences.

Numerous modifications are still missing of regulations that govern work at sea in the context of work on OWP installations in the Polish hinterland.

We should urgently consider the complete reform of the register of Polish flag or the establishment of a new register, so that vessels that maintain Polish OWFs could or even have to be registered in it, which would certainly secure Polish interests much better.

On the other hand, I am often concerned about opinions that it is already too late for such far-reaching systemic changes in law in this area and that it is better to leave it as it is, because such gaps will be somehow ‘plugged’ by the market itself.


There is also a common opinion that Polish firms should succeed in OWP at arm’s length?

Well, such opinions may be aired, but they are definitely not shared by entrepreneurs. A good example are shipyards, which take advantage of actual state aid, either direct or indirect, all over the world. In Poland such assistance is in fact illusory; therefore, in the tender for the Polish OWFs we will see foreign shipyards supported by their states and Polish private shipyards, which somehow have to manage by themselves. Where is the free market here?

Such opinions prove that nobody is actually listening to entrepreneurs when different strategies, draft regulations (e.g. draft Regulation of the Minister of Infrastructure on the assessment of applications in the settlement proceedings) or regulations (e.g. Offshore Act) are formulated.


But on the other hand, Poland cannot introduce regulations that would be discriminatory for foreign firms. What can you say to this argument?

Nothing could be further from the truth. Unfortunately, many people repeat this unreasonable position, without going deeper into this issue from a legal perspective.

Please keep in mind that we are talking about the power sector, which is also correlated with the state defences. These two zones use relevant legal exclusions from the principle of non-discrimination. Such exclusions concern community regulations as well as bilateral and multilateral international agreements. We can certainly introduce in this scope something of the Polish Jones Act, but it seems that nobody in the government is actually interested in this.

Let me stress this again that OWP is the critical infrastructure, which will finally meet about 25% power demand of the Republic of Poland. Therefore, urgent and concrete actions are needed in this aspect.

I would like to emphasize again that the failure to secure the Polish local content may lead to the situation where OWP installations will be erected based on foreign components, with foreign software and will be operated by foreign service ports and protected by foreign firms. Does this secure our national interest? I don’t think so.


What are you most concerned about as regards the Polish offshore wind power?

I think that the whole project will share the fate of the Polish nuclear power plants, which have operated very well in visions and plans for decades, but not in reality.

Thank you for the interview.