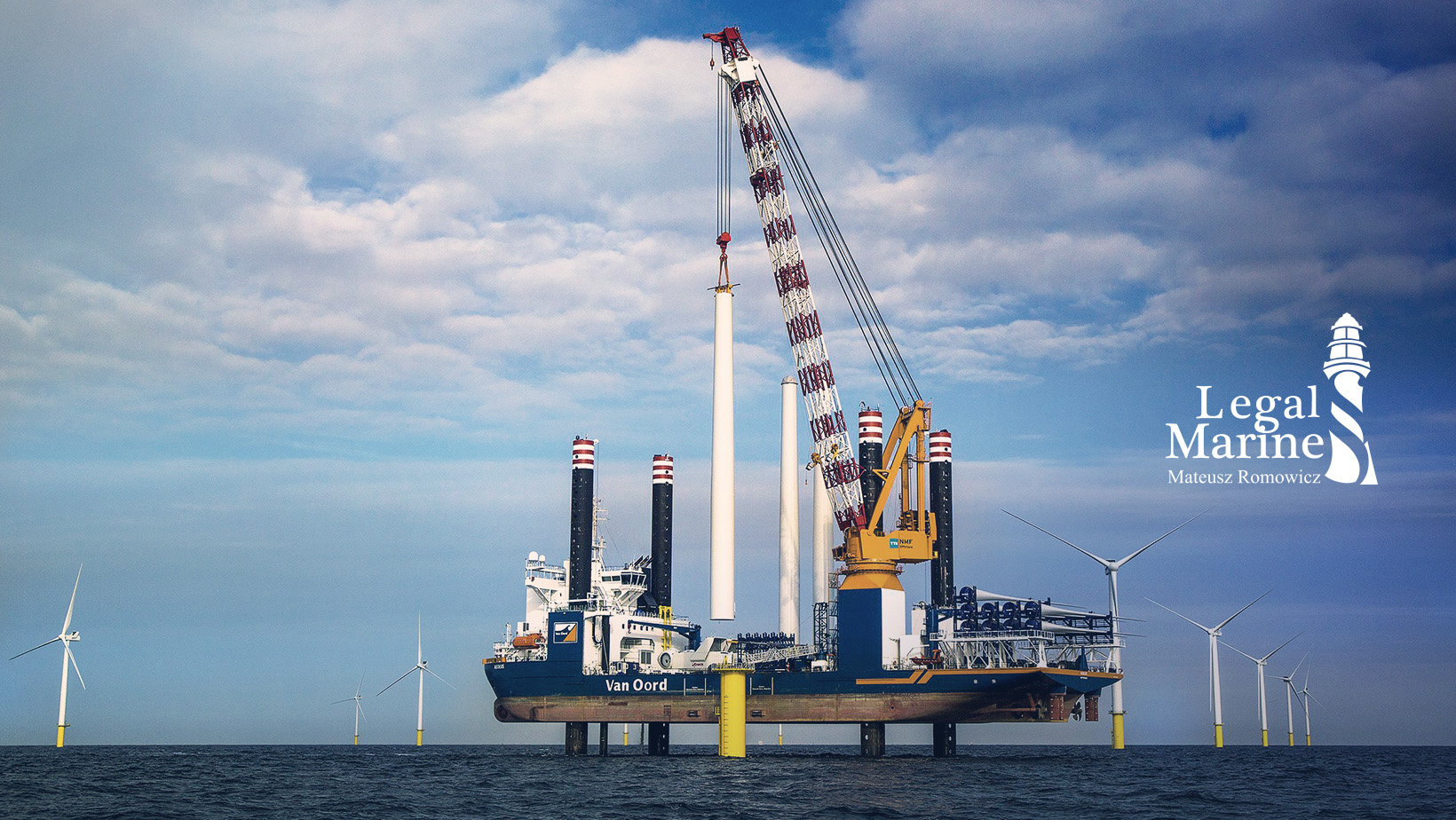 On 15 September 2021, the much heralded sectoral deal was signed. According to some erroneous opinions, the deal is to secure the Polish chain of deliveries in the construction and operation of Polish Offshore Wind Farms (OWFs).

As the document is available to the general public, and in numerous announcements its success has been declared in securing the Polish local content with regard to the Polish project of offshore wind energy sector, I have allowed myself to analyse that document. In fact, in legal terms, the document changes nothing at all.

The sector deal is presented to the public as a type of cure-all for major deficiencies in regulations that concern OWFs reported by entrepreneurs and lawyers (surprisingly, not all of them). There can be nothing more mistaken – numerous regulations that should provide any measurable legal securities for the local content in the Polish offshore wind energy sector are still missing.

It is also still noteworthy that great many valuable and constructive comments offered by signatories of the deal were finally not included in it. The reason for this is simple. Such provisions would be contrary to Polish law anyway, which is still not adapted to offshore issues, e.g. the public procurement law.


What is the sector deal?

It is nothing more than an agreement in which declarations of the parties are given repeatedly, but without realistic and, most importantly, enforceable obligations. The signatories ‘represent’, ‘ensure’, ‘agree on’, and ‘declare’, which means that the deal differs little with respect to its legal effects from a letter of intent signed about OWFs.

The deal does not have the characteristics of generally applicable provisions, because for obvious reasons it does not constitute a source of law in the Polish legal system.

The preamble to the sector deal reads as follows: ‘The Parties to this Deal decide to create new frameworks of cooperation within the development of OWFs in Poland, taking into account the necessity of providing economic development, enhancing the competitiveness of Polish entrepreneurs, economic and power security of Poland based on its own, stable, zero-emission production sources, namely offshore wind farms (…). This Deal is to constitute a permanent cooperation platform for government administration authorities, local government authorities, present and future investors and OWF operators in Poland as well as representatives of the chain of deliveries and services, scientific and research units and financial-insurance institutions, in order to achieve the objective of the Deal, by ensuring coordinated activities for the dynamic development of the OWF sector in Poland, focusing on the reinforcement of domestic energy, environmental, economic, and social benefits.’

While ‘commercially’ the deal may prove useful, to show the good will of the parties in some target projects, it does not translate actually in business or legal terms to protecting Polish entrepreneurs from the offshore economy sector at all.


Inept attempt at giving a definition of local content

An unsuccessful attempt has been made in the sector deal to define local content, as the definition has no legal nature (commonly binding). It constitutes merely a definition for the purpose of the deal, which unfortunately is defective and significantly narrow.

§1 of the sector deal reads as follows: ‘The Parties jointly declare that the concept of local content shall be understood as the participation of entrepreneurs with a registered office in Poland or foreign entrepreneurs who have their branch or representation in the territory of the Republic of Poland and who carry on production or service operations in the territory of the Republic of Poland, creating a chain of deliveries in fulfilling orders for the purpose of constructing and operating OWFs in the Polish exclusive economic zone.’

At a first glance one could get an impression that the definition is quite reasonable; however, when one reads it carefully, it is too narrow and does not express the core of local content.

The definition is limited to the share in local content of selected entrepreneurs, but what about local governments, universities, schools, foundations, and associations?

Another missing element are Polish entities that handle issues of personnel, financing, insurance, consulting, and compliance.

When analysing the sector deal in §3 we find the provisions indicating that ‘the consistent implementation of the programme of constructing OWFs in Poland and ensuring the stable and favourable conditions for developing the domestic sector of production and services for OWFs will make it possible to gradually achieve, in the perspective of 2030, the share of local content in consecutive projects at minimum 20%, and in case of maintaining optimum conditions, the achievement of minimum 50% in the following decade.’

The vision may seem attractive, but is completely detached from business and legal realities of OWFs in Poland. While reading such provisions in the sector deal one could get an impression that it has only a marketing dimension, because as of today this provision constitutes what is generally referred to as wishful thinking.

What is missing is a basic legal framework that would secure the implementation of such an ambitious vision, because no plan is even spoken about there.

In order to consider such a scenario, one should at the very beginning:
1. amend the public procurement law so that the Polish offshore wind sector constituted a completely separate type of sector procurements;
2. introduce regulations that govern and define local content broadly on a domestic level;
3. introduce in generally applicable laws a basis for constructive interventionism of the Polish state in business processes relating to the project of the Polish offshore wind sector, following in the footsteps of other EU member states, such as the Netherlands, Denmark, Germany and the United Kingdom, when it was still the EU member; and
4. prepare, as quickly as possible, one legal act dedicated to the Polish wind offshore sector that would amend other laws, including the public procurement law, regulations that govern competences of maritime services, etc.

Unfortunately, in §3 of the sector deal we can read as follows: ‘It is necessary to provide the open and nondiscriminatory access to the market of orders and services for purposes of the offshore wind sector, according to rules applicable in the EU, and following the rules of fair competition by all participants of the OWF chain of supplies. In order to ensure the stability of the domestic market environment and support competitiveness and security of deliveries, investors will establish extended technical dialogue, in particular with the local chain of deliveries under construction, in order to maximise the share of local content’.

The global practice in the implementation of OWF projects shows that no local content is constructed only as a part of dialogue, but also or first and foremost based on specific regulations that secure it. What is more, two very significant issues appear in the context of OWFs that enable its ensuring through interventions, namely the question of state defence, because OWF is the critical infrastructure and an important element of the power security of state.

Interestingly, numerous persons, including some lawyers (sic!) present a completely mistaken opinion that we cannot ensure the share of Polish content legally in the offshore wind sector, because that would be discriminating or would constitute an expression of unfair competition.

It is worth noting applicable EU regulations that make exceptions to the above-mentioned rules exactly with respect to defence and power security of a state. Practical examples include the above-mentioned Netherlands, Denmark, Germany, and the United Kingdom, when it was still a member of the European Union.

Another issue are international agreements that also allow such exceptions. For example, one could mention the Treaty between the United States of America and the Republic of Poland concerning business and economic relations of 21 March 1990: ‘Each Party shall permit, in accordance with its relevant laws and regulations, and treat investment and associated activities on a non-discriminatory basis, subject to the right of each Party to make or maintain exceptions falling within one of the sectors or matters listed in the Annex to this Treaty.’ (art. II(1)).

Moreover, according to art. II(6) of the above-mentioned Treaty, Investment shall at all times be accorded fair and equitable treatment, shall enjoy full protection and security and shall in no case be accorded treatment less than that required by international law. Neither Party shall in any way impair by arbitrary and discriminatory measures the management, operation, maintenance, use, enjoyment, acquisition, expansion or disposal of investments. Each Party shall observe any obligation it may have entered into with regard to investments. It is worth mentioning that according to the Annex to the Treaty, more specifically section 4: ‘Consistent with Article II, paragraph 1, the Republic of Poland reserves the right to make or maintain limited exceptions in the sectors or matters it has indicated below: (..) energy and power production; ownership and use of real estate; exploitation of natural resources; maritime related services (…);’

It is also worth remembering that in their practical activities all shipyards in Europe are, somehow or other, supported by the state. What is more, also ports, for which transhipment of wind offshore components is far less profitable than transhipment of containers, will use co-financing in this respect. Hence, what rules of fair competition and free market is this all about?


Marginal role of the Coordination Council in matters of OWFs

In the sector deal, and more specifically in §5 ‘Parties appoint the Coordination Council for matters of the Offshore Wind Power (hereinafter: ‘Coordination Council’) to coordinate measures aimed at implementing the provisions of this Deal’.

To clarify the message – the Council is responsible only for coordinating ‘representations, assurances, agreements, and declarations’ that result from the deal. In my opinion, its role will be marginal.

Moving on to specific tasks of the Coordination Council, they will include in particular:
1) monitoring the fulfilment of strategic objectives mentioned in § 2;
2) appointing working groups to ensure the cooperation of the Parties within essential areas mentioned in § 3; and
3) monitoring the local content level achieved by investors and entities involved in the chain of deliveries for OWFs.

The Coordination Council will be another body appointed to discuss and prepare analyses that in fact will have not realistic influence on OWF in Poland.

Upon analysing the sector deal, which is presented as a success of OWF, I regret to conclude that in its legal aspect it changes nothing for OWF. Will it change anything in the business aspect, having no relevant legal regulations? To my mind, it will not either. One may get an overwhelming impression that Polish decision-makers have jumped for years between focal issues such as nuclear energy, offshore wind power, and now hydrogen, without coordinating constructively any measures around such important topics, especially without introducing relevant regulations that would secure, effectively and according to European and international law, interests of local content and the Polish state.

Something even worse is happening, namely other than declarations, agreements and numerous analyses presented at conferences, we still have no nuclear power plants in Poland, we are still not adequately prepared for starting the process of constructing OWFs, not to mention hydrogen issues.

It is worth remembering that without relevant legal regulations each of such areas will become another story of lost chances for Poland and the Polish local content.