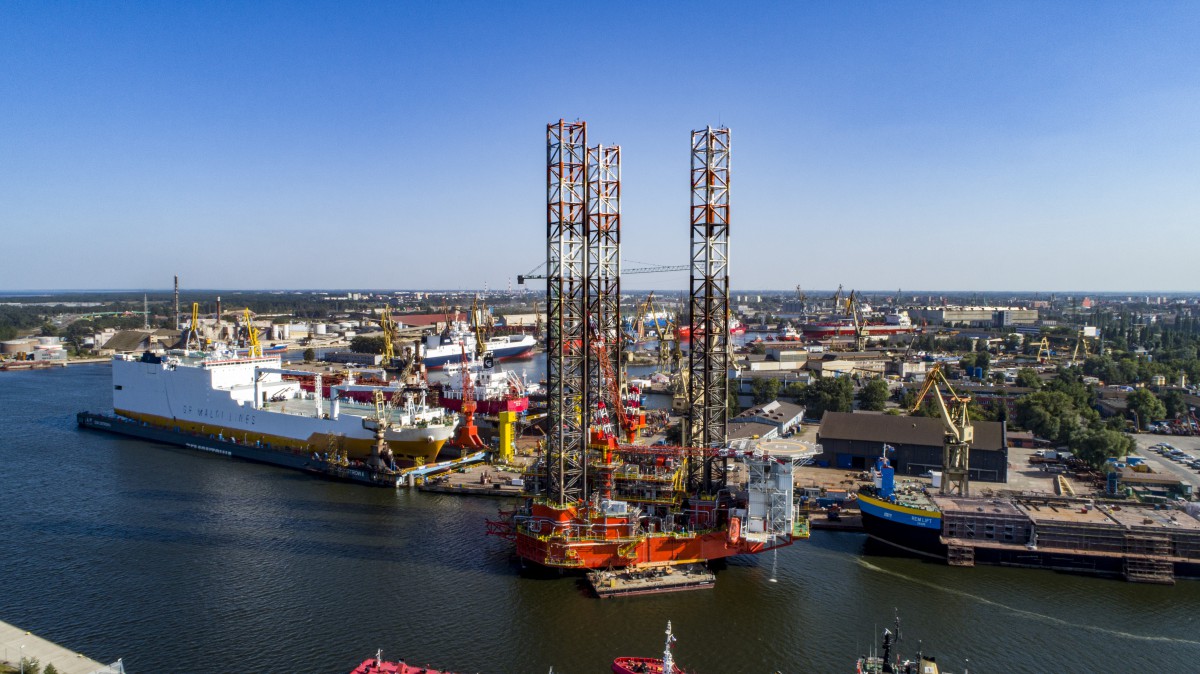 Shipyards
Petrobaltic offshore platform rebuilt into the Maritime Production Center. It will soon start working on the B8 field (photo, video)

The next stage of reconstruction of the Petrobaltic offshore platform has been completed. The unit was transformed at Gdańsk Shipyard REMONTOWA into a Maritime Production Center. On Tuesday, it was consecrated and will soon leave Gdańsk to start working on the B8 field in the Baltic Sea.

- The platform being rebuilt into the Offshore Production Center is not just one of the projects to develop hydrocarbon deposits in the Baltic Sea. This is another step to increase energy sovereignty, which is one of the most important goals of Polish government. Energy security is strategic goal. It is important for citizens and society as a whole. Our country can boast of the effects of the last four years of hard work to ensure it. The Maritime Production Center - the Mine Oil and Gas Mine is part of this goal - Prime Minister Mateusz Morawicki wrote in a letter.

The CEO of LOTOS Petrobaltic Grzegorz Strzelczyk announced that we are facing the "hour of truth". He means deploying unit on the B8 field, works at sea, start-ups, commissioning of systems installed on the platform and effective completion of the development of this field.

- It was a drilling platform used for many years by LOTOS Petrobaltic to explore and penetrate deposits in the Baltic Sea. In 2013, a decision was made to rebuild this platform into a mining platform, and in 2015, its reconstruction began. Today, we are finishing this first stage of the entire B8 field development process. This is very high quality oil, so-called "Light sweet oil", without impurities, with low sulfur content - says Grzegorz Strzelczyk, President of LOTOS Petrobaltic.

He added that the B8 field should be completely developed in 2021.

Lotos Petrobaltic announced in a press release that the conversion of the oil rig into a Production Center is a large and complicated project. The works are supervised by the Polish Register of Shipping.

- The key for the entire project was mounting four powerful modules weighing several hundred tons each on the platform. These were crude oil separation system, gas compression and export system, water injection system and energy system whose heart is a turbogenerator using separated gas as fuel to power the platform. The next step was the installation of support for the residential module and gas burners. Then, a residential module with a helicopter landing pad weighing about 550 tons was transported with great precision using a barge through the port channel.

After less than two years of intensive work on mechanical completeness carried out by the company together with the shipyard, as well as testing and preparation for commissioning of general ship and production systems, the unit is being prepared to leave Gdańsk Stocznia REMONTOWA SA. Thanks to the project verification, as well as the stable and consistent implementation of individual maritime tasks The Production Center has become a modern, ecological and efficient platform. Up to 500 people worked on the project at the same time and - what should be emphasized - all work was carried out safely! - stated in the announcement.

- Today everyone has witnessed that the recipient is happy, that he has received a good product and I think that we will continue to cooperate. I think that now we will help the refinery and together we will be a "team" . I am very happy that LOTOS Petrobaltic is developing - says Piotr Soyka, president of the REMONTOWA HOLDING Capital Group.
Janusz Czajkowski, technical director for investment and development at LOTOS Petrobaltic, was present at the dedication ceremony of the platform and announced that the platform is "a rather complicated tool, a process unit."

- It will transport  from the bottom of the sea the reservoir fluid which then will be processed. Oil will be separated, gas will be separated and, as a consequence, oil will be transported via the "CALM" buoy to the tanker and gas transport via the pipeline to the CHP plant in Władysławowo. This process is very optimized. This allows us to project mining 6 thousand. barrels of oil per day and approx. 200 thousand cbm of gas - explains Janusz Czajkowski, technical director for investment and development at LOTOS Petrobaltic.

At the beginning of September, the platform will be towed to the B8 field, located in the Polish economic zone of the Baltic Sea, approximately 70 km north of Jastarnia. Lotos Petrobaltic said in a statement that the next step would be to prepare the platform "to take over the extraction from the LOTOS PETROBALTIC platform operating there".

Janusz Przyborowski, head of the Petrobaltic platform, announced that the entire crew will consist of 74 people. Half of them, 37 people, will stay on the platform at once. Then the crews will exchange.

- Work is continuous, 24 hours. The crew is divided into four services: operational service, an energy and mechanical department, an on-board service that deals with reloading, unloading of ships, fire protection on the platform and hotel service - says Janusz Przyborowski, head of the Petrobaltic platform.

The reconstruction of the platform is one of the B8 field development investment projects. The scale of this project and its offshore specificity make it one of the most interesting projects in Europe. The scope of works currently being carried out concerns the first phase of the B8 field development target program, which will result in stable production from four production wells. The target deposit development plan assumes further development of infrastructure in the second phase, which will enable an increase in the volume of oil and gas extraction by adding further production wells to operation, stable gas transport built by LOTOS Petrobaltic in 2018 via the pipeline to Władysławowo, and stabilization of the deposit through water injection.

LOTOS Petrobaltic and its subsidiaries focus on operational and service activities in the Baltic area, i.e. exploitation of the B3 field, development of the B8 field, in order to launch full production, implementation of exploration projects in the Baltic Sea and land concessions in Poland. At the same time, the company develops its engineering, executive and design competences for the offshore sector, ultimately with the option of providing services outside Grupa LOTOS.

LOTOS Petrobaltic operates within the LOTOS Group, whose activity is of strategic importance for Polish and European security in the energy sector and the Polish economy. LOTOS extracts natural gas and oil in Poland, Norway and Lithuania. It has one of the most modern European refineries, where the raw material is processed into high-quality fuels, including premium fuels - LOTOS Dynamic.