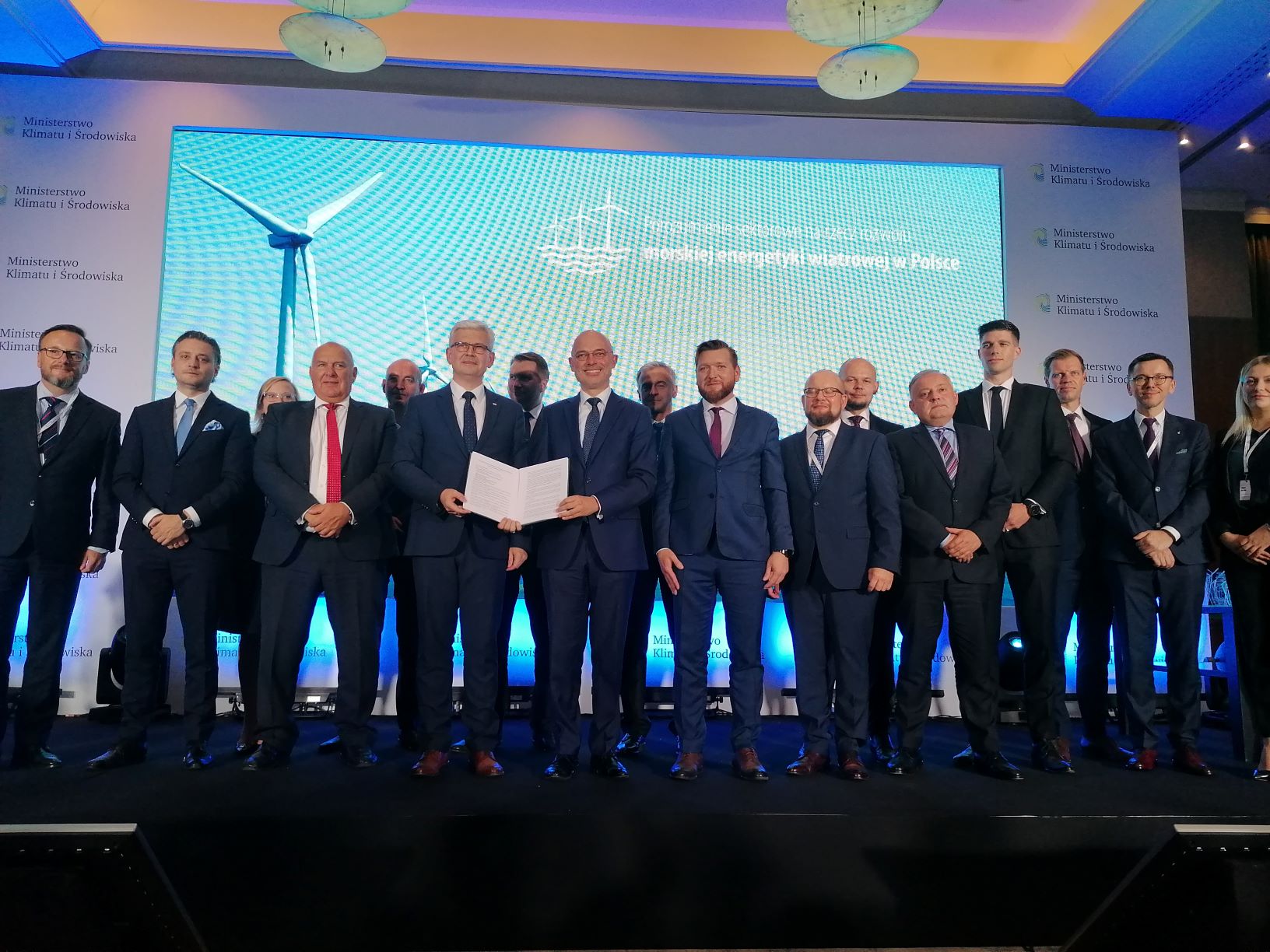 Shipyards
Polish offshore speeds up thanks to the sector deal

The sector agreement or so called “sector deal” was to be the hope for all those who planned to participate in the Polish offshore wind energy sector. Such an agreement was officially signed last week by over 200 entities.

The importance of the sector agreement has long been emphasized by representatives of all branches of the emerging offshore wind industry. The agreement is to secure the interests of all interested parties and the final assurance of government support, which will provide investors with certainty and accelerate their decisions and projects.

- The point is that all parties involved in the process should jointly pursue the same goal, to establish a framework for cooperation on how offshore is to develop - said Kamila Tarnacka, vice president of the Polish Wind Energy Association.

Last Wednesday, September 15, the sector agreement was finally signed by over 200 entities. The government side was represented by the administration, ministries of climate, assets, defense and home affairs. The signatures were also made by representatives of local governments, entities from the education and science sector, investors and industry organizations. As stated, the agreement is to constitute a platform for cooperation between all elements of the emerging sector, which in turn is to lead to the strengthening of domestic benefits in the field of energy, environment, economy and society.

On the occasion of signing the agreement, a special letter was sent by Polish Prime Minister Mateusz Morawiecki. “Today we are on the threshold of building a new sector of the economy, which is offshore wind energy. This sector will provide us with access to cheap energy and will strengthen the competitiveness of Polish enterprises "- he wrote.

The agreement is in a sense historical, as mentioned during the signing ceremony by Michał Kurtyka, Minister of Climate. Apart from a similar agreement in the UK, it is the first such initiative in the European Union. - There is no room for sector-limited economic changes in Poland anymore, if everyone does not contribute to the transformation, it will simply fail. The agreement is a recipe, an indication that we are able to unite the forces of many members - said the minister.

Janusz Gajowiecki, president of the Polish Wind Energy Association, emphasized the importance of the presence of big foreign investors from the very beginning of the construction of the sector. - It is thanks to them that the Polish supply chain is able to enter global markets. We can be a supplier leader. Such large investments will require the involvement of many industries and enterprises that can and should actively participate in building the supply chain to offshore farms in the Baltic Sea - added Gajowiecki.

Among more than 200 signatories there were the largest Polish companies involved in the energy sector, such as PGE or companies from the Orlen group, as well as foreign investors, such as Orsted and Equinor.

- As the Orlen Group, we know that offshore wind energy will play one of the key roles in the energy transformation and achieving the group's emission neutrality. It is also a new, attractive area for the development of industry and business in Poland - emphasized the president of PKN Orlen, Daniel Obajtek, quoted in the concern's announcement. Obajtek added that Orlen actively cooperated in the process of creating the contract, which - apart from the offshore act - will be "another milestone in the development of wind energy in the Baltic Sea".

- We will support these aspirations and set the Polish example as a model when it comes to working out a sector agreement. Over the past year, the Polish government has made an extraordinary effort and engaged hundreds of international experts from the offshore wind energy sector and many industries to deliver a sector agreement in the shape and form we can see it today. Many countries could learn from this example - said Peter Obling, Orsted's CEO of Markets and Trade.

An important element of the developed agreement is securing local content.

- Local content is one of the key aspects for the development of offshore wind energy in Poland. Together with our partner, we conduct activities that show the potential and needs of this industry to Polish companies, so that they can start their preparations as early as possible, enabling active participation in building these strategic energy investments for Poland - commented the President of Equinor Polska, Michał Kołodziejczyk.

The sectoral agreement includes, inter alia, a minimum share of local content at the level of 20-30 percent for projects implemented until 2030, and a minimum of 45 percent for subsequent ones. The export of products and services of the sector is to be worth PLN 2 and 5 billion, respectively. It was also indicated that a total of about 90,000 jobs will be created.

The document also indicates that an installation terminal for offshore wind farms will be built in Gdynia by 2025, and another one will be prepared in the years 2026-30. Additionally, at least two service ports are planned - in Łeba and Ustka. All logistics and port facilities are to be built, and the industry's innovation is to be supported by dedicated research and development programs to be launched next year.

The agreement also specifies obligations on the part of investors. They are to develop offers for at least partial supplies for the construction of wind farms in the Baltic Sea in 2024-26, and to develop the full supply potential in the coming years. An important decision is the appointment of national installation and service fleet operators, which are to operate by the end of the decade. A separate provision concerns the surplus energy generated from offshore wind farms, which are to be used to generate hydrogen.

As emphasized by commentators, apart from specific provisions contained in the sectoral agreement, an important aspect is the very signing of it, which is to result in regular consultations of the government administration with the industry. Thanks to them, investors and companies involved in the supply chain will gain predictability of legal changes that will take place in the near future. The Coordination Council appointed for this purpose is to meet at least twice a year.