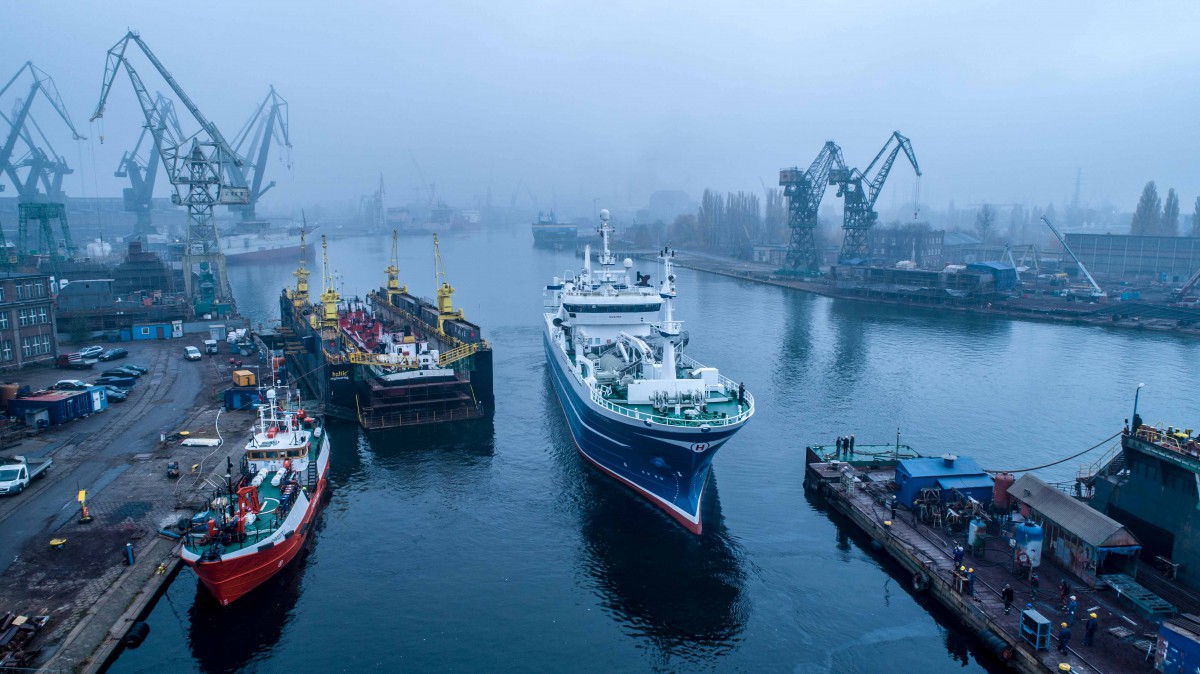 On Friday, Alkor shipyard in Gdansk launched reconstructed Icelandic trawler Huginn VE 55. A few months ago, the vessel arrived in the shipyard and was about 10 percent shorter. During the reconstruction trawler was dissected into two parts, between which additional midship sections were installed.

Fish-processing trawler was extended by 7.2 m, which allowed it to achieve a length of 75.5 m. Huginn also gained further fish tanks: 1 RSW tank on each of the right and left side for storing fish and 1 middle tank for frozen fish stored at -30 degrees.

In an interview with the portal GospodarkaMorska.pl Andrzej Żółć, head of marketing at the shipyard ALKOR, announced that,  “due to the reconstruction, the capacity of the ship increased. Thanks to which the shipowner will spend more time on the fishery, less often will call at ports, which will translate into financial savings.”

In addition to the aforementioned works, Alkor replaced all pipelines of the RSW system and repaired equipment, lifts, crane and steel formwork. Maintenance and painting works were also carried out.

Huginn is the 14th ship from the Icelandic shipowner rebuilt in the ALKOR shipyard. A few months ago, the reconstruction of the Sighvatur vessel was also completed. Icelandic longliner Sighvatur GK 57, formerly m / v Saevik GK 257, was extended by more than 5 m due to the installation of a special 4.635 m long midship piece and a stern extension. Additionally shipyard added superstructures to the bow and stern and the ship's protective decks were raised. The interior has also been thoroughly renovated.

After extending, the long liner VISIR ehf for the Icelandic shipowner is now 48.2 m long and 8 m wide. It will fit 400 boxes of fresh fish with a capacity of 460 l each. Thanks to special safeguards, the cargo will not move during the voyage. The ship was also equipped with a 36 km long rope with a total of 24,000 hooks suspended there every 1.5 meters.

ALKOR performs all kinds of renovation works, as well as rebuilds and ships extensions. It is one of the few repair shipyards in Poland equipped with its own floating dock. It is 155 m long, 24.7 m wide between towers, and its lifting capacity is 8,000 tons.