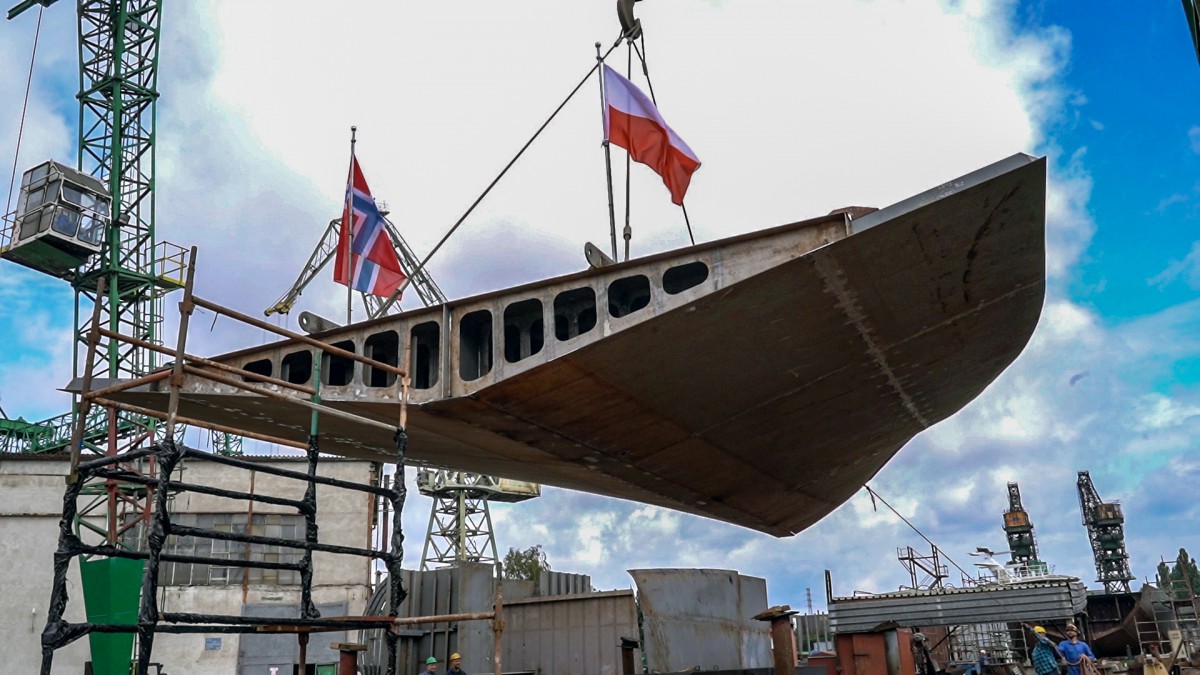 Shipyards
Polish shipyard Safe has laid a keel for the construction of a fully equipped fishing vessel for Norwegians (photo, video)

Safe Shipyard began construction of a fully equipped fishing vessel for the Norwegian company Granli Fiskeri AS. The laying the keel ceremony took place on Tuesday. The modern vessel, which will receive the name MS Slettenberg, is to be ready in 2020. This is yet another fully equipped ship , which will be fully built completely by Safe.

- Yesterday we launched a ship for a Dutch shipowner, and today we put a keel for the Norwegian shipowner. It is interesting coincidence. Unit was ordered by the Norwegian shipowner up from behind the Arctic Circle, which is far to the north. This is the first, in fact, a more serious step in the construction of a completely equipped unit, which will be passed on to the shipowner at the turn of August and September next year. It is a modern ship with a nice design. It is richly equipped in fishing and processing equipment - Marek Siemaszko, Safe shipyard CEO, said.

- This is a very important moment for me. I am here with my wife and the youngest son. It's something you do not see every day. For the first time in my life I am building a new ship - Sten Granli, owner-shipowner of Granla Fiskeri AS, said.

He added that MS Slettenberg will operate in the north of Norway, in the Barents Sea and in the vicinity of Svalbard.

The contract for the construction of the vessel was signed on December 16 last year. The project office Naval Consult AS is responsible for the design.

- The ship will be 28 m long and 10 m wide. It will be adapted for fishing using bottom trawls. This will be a modern Norwegian fishing vessel - Edgar Kvernevik, designer at Naval Consult AS, said.

- On our own we completed a series of fully equipped vessels for servicing salmon farms for Norwegian customers, while we also made vessels completely equipped for other recipients, but in cooperation with the contracting shipyard and design offices from abroad. Probably our most spectacular achievements is construction of specialized hybrid tugs, which were once considered the most modern in the world. Its designer was a Canadian office, and they were ordered by Damen shipyard from the Netherlands. All work took place in our shipyard, including sea trials. Similar tug, but without hybrid drive, was also built here and is servicing the latest Queen Elizabeth aircraft carrier – Siemaszko said.

He added that the shipyard is currently building several more units for the Damen shipyard, which will be used for hydro-technical works, as well as a whole group of fishing vessels for various purposes.

Safe Co LTD was founded in 1995. The company operates actively in Poland and abroad, mainly in France and Germany. It deals in construction of ships, steel bridge structures as well as structures for the offshore, chemical and petrochemical industries.