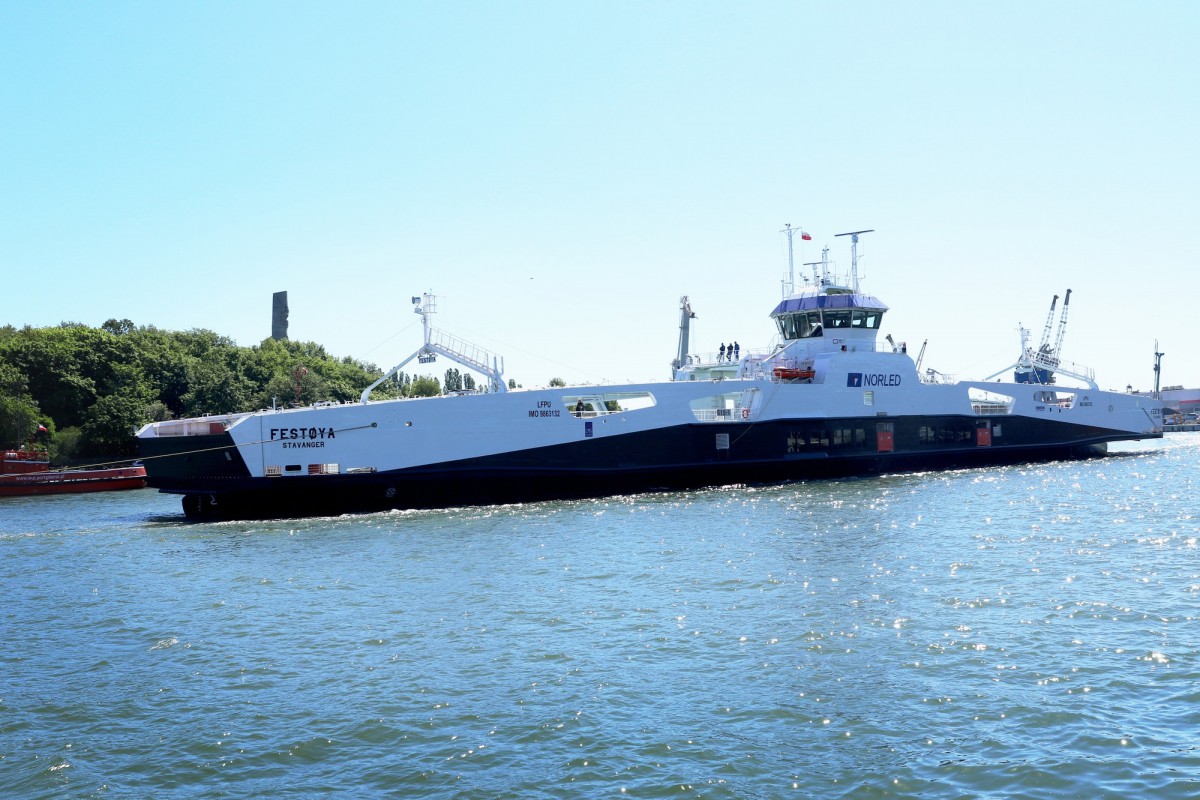 Remontowa Shipbuilding SA from Remontowa Holding capital group gave the shipowner the first (B619/1) of four battery-powered double-sided electric passenger-car ferries – prototype Festøya. Fully equipped units are built for the ferry operator Norled, one of the largest in Norway.

On Wednesday, 24 June, in the presence of the shipowner’s representatives, the ceremonial handover of unit B619/1 took place. The handover protocol was signed and the flag was changed to Norwegian. On Friday, 26 June the ship sailed to Stavanger in Norway. It will cover this route in 3 days.

– The shipowner is very pleased with the quality of the work and the cooperation with the shipyard so far,” said Piotr Alboszta, project manager.

Four modern battery-powered double-sided ferries will be sailing in the area of Norwegian fjords and will serve the connection between Festøya – Solavågen and Mannheller – Fodnes. The freshly picked ferry should enter the Festøya-Solavågen line by mid July this year.

Work on the other three units is advanced.

– Harbour Acceptance Test are being carried out on unit B619/2. The vast majority of the work is complete. Currently, together with the services, we are focusing on the systems’ start-up. Based on the knowledge and extensive experience from HAT tests on the B619/1, everything indicates that the time of their implementation will be reduced by about half. The sea trials are planned for the turn of July and August this year. The schedule agreed with the shipowner plans to hand over the vessel in early August this year. – said Piotr Alboszta.

The last ferry, construction number B619/4, is also sandblasted and painted. Its launching will take place in the second half of July, using a floating dock from Gdańsk Shiprepair Yard SA. The same dock will also be used to dock the B619/2 to review the underwater part before sea trials.

The design of the ferries was done by LMG Marin design office and the working documentation of Remontowa Marine Design & Consulting (RMDC) from Remontowa Holding group. Other companies of this group are also involved in their construction (Electrical Solutions Repair, Hydroster Systems Repair, Coating & Equipment Repair and Lighting Technologies Repair).

These are modern double-sided battery-powered ferries, designed to minimize energy consumption, which includes, among others: LED-type lighting, power supply systems for equipment based on frequency converters, energy-efficient ventilation and air conditioning systems, paint in the underwater part of the hull to minimize friction, lightweight construction of the ship and a specially developed hull shape to reduce resistance in water.

Each unit will be equipped with two PM-engine azimuthal thrusters and two generator sets. In the standard mode of operation all power will be drawn from the batteries, which will be recharged during the ferry’s berth at the berth, which is to last only 11 minutes.

The thrusters will be units of the “pulling” type. (pulling type) with built-in electric motors, driven by permanent magnets, providing high performance even at very low load. Generators whose internal combustion engines will only run on bio-diesel are to be used as power sources in case of a battery system failure.

Norled’s fleet consists of about 80 ferries, six of which were built at Remontowa Shipbuilding SA, i.e. after delivery of the currently built units the number will increase to ten. Among them are Ryfylke and Hardanger, both delivered in 2013, which are the first vessels in the world not taking diesel fuel on board – the ships are powered by LNG and in case of CNG failure (stored in cylinders on open deck).