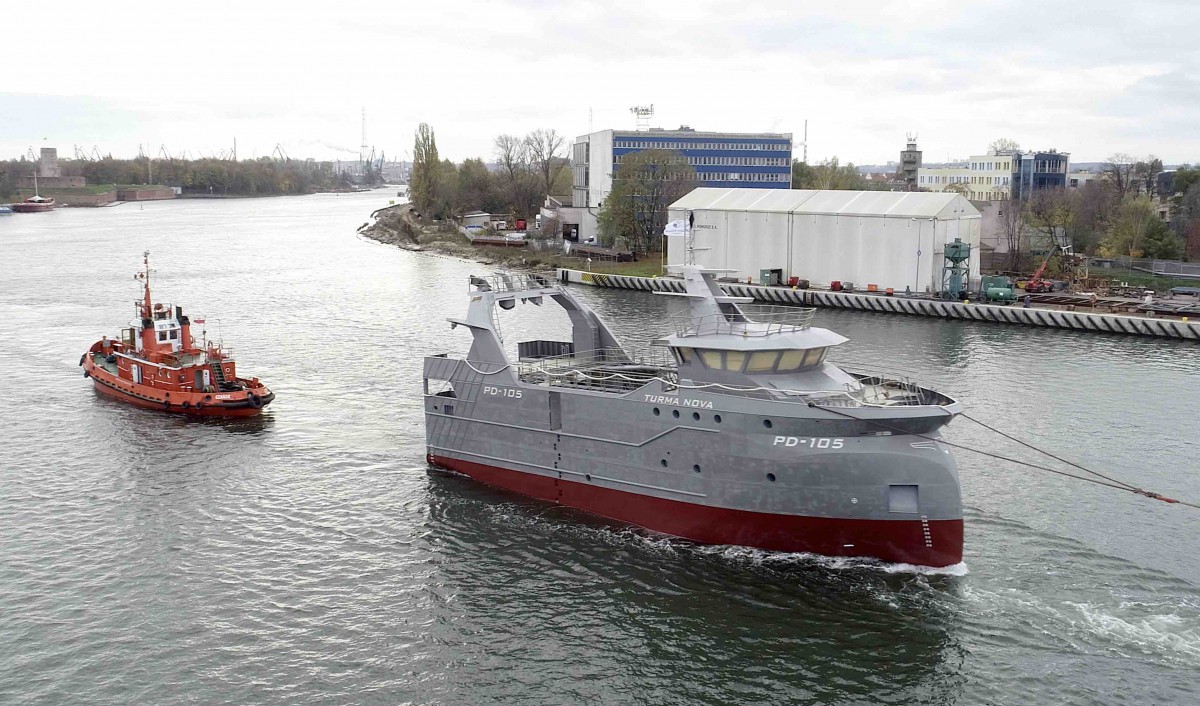 On 31 October, the Safe shipyard in Gdańsk handed over a partially equipped, modern twin-rigged fishing trawler called Turma Nova. This is the third unit in the series built for the Dutch shipyard Damen Maskaant.

Turma Nova trawler with building number NB 628 is 32 m long and 9.6 m wide. The vessel is built under the supervision of the Lloyd´s Register classification society. The technical design was developed by the Dutch design office Vripack, while the working documentation was prepared by the design office of Safe. The Dutch shipyard Damen Maaskant Shipyards Stellendam is responsible for the final equipment of the ship.

Two floating cranes were used to launch the Spes Nova trawler: Conrad Consul and Maja. The unit was raised by them and then lowered into the water.

The design and equipment of the vessel comply with the principles of sustainable fisheries, on which the future owner - Ekofish Group puts special emphasis. They also reflect a multidisciplinary approach to ship construction – using the experience of Safe shipyards, Damen Maaskant Shipyards Stellendam and the Vripack design office, which deals with yacht design. This is how the hybrid unit with combustion-electric drive was created. It will consist of three identical Caterpillar diesel generator sets, combined with battery energy management system. The trawler will be able to use the batteries both during short-term tasks at sea and during stops in ports, which will reduce fuel consumption and CO2 emissions. This solution is innovative in the fishing industry.

Safe Co LTD was founded in 1995. The company operates actively in the country and abroad, mainly in France and Germany. It deals with, among others shipbuilding, steel bridge structures, as well as structures for the offshore, chemical and petrochemical industries.

The Ekofish Group, on the other hand, is a family company whose history dates back over a hundred years. The company puts great emphasis on sustainable fishing to protect the resources of the seas and oceans. In 2009, the Ekofish Group was the first company in Europe to obtain the MSC (Marine Stewardship Council) certificate for ecological fishing for flatfish.