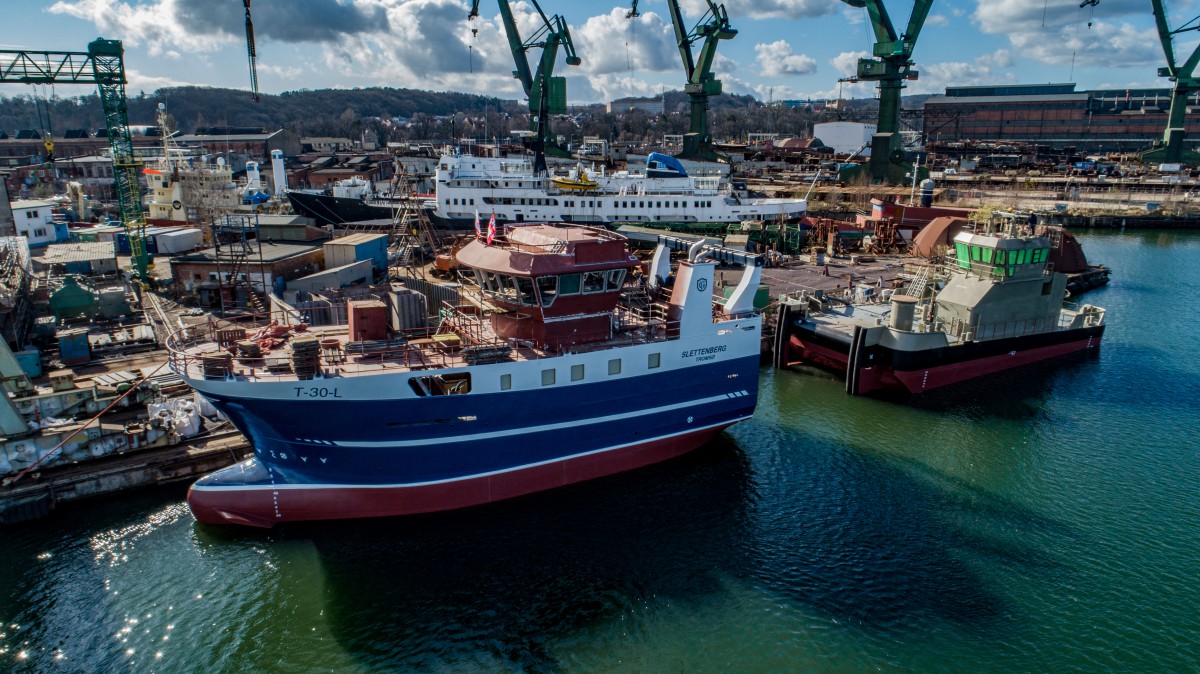 Shipyards
Safe shipyard launched a trawler and hull for a tug [photo, video]

On March 18 a fishing vessel was launched in the Safe shipyard (Gdańsk) in a two-stage operation for the Norwegian company Granli Fiskeri AS. The vessel with construction number NB001 will now be equipped and prepared for sea trials.

The launching operation lasted two days. First, the vessel was slid onto a pontoon, where it was towed to a floating dock, and then the ship was launched and towed from the dock.

As Marek Siemaszko, the president of Safe shipyard told us: "This is a fishing vessel built for a Norwegian shipowner from behind the Arctic Circle, which is far north. It is a modern vessel with a nice design. It’s really very well equipped, both with fishing and processing equipment.”

The contract for the construction of the unit was signed on December 16, 2018. Naval Consult AS is responsible for the design.

The modern vessel, which is 28 m long and 10 m wide, will be named MS Slettenberg. The ship will operate in the north of Norway, in the Barents Sea and around Svalbard.

MS Slettenberg is another fully equipped unit for the own account of the Safe shipyard.

- Safe has previously built a series of vessels fully equipped to support salmon farms for Norwegian customers and we also made vessels fully equipped for other customers, in cooperation with the contracting shipyard and design offices from abroad. Probably the most spectacular of our achievements was construction of a specialist hybrid tugs, once recognized as the most modern in the world. The designer was a Canadian office, and were ordered by Damen shipyard from the Netherlands, but the ship was fully built in Poland, including sea trials. A similar tug, but without a hybrid drive, was also built fully here and now it serves the latest English aircraft carrier Queen Elizabeth - said Siemaszko.

The day before, Safe launched partially equipped hull of a tug Multicat 2712 (YN 571815). It was ordered by the Dutch shipyard Damen Shipyards Hardinxveld.

Maja crane was used to launch the tug boat. The vessel was raised and then lowered into the water. Maja is owned by the Polskie Ratownictwo Okrętowe. This floating crane is 55.49 m long, 25.02 m wide and has 2.85 m draft. Its arm rotates 360 °, the main hook has a lifting capacity of 330 t, and the auxiliary hook - 100 t.

Multicat 2712 tugboat with construction number YN 571815 is a multi-purpose vessel that can be employed as a mooring ship, carrying moorings and anchors in the oil fields, as well as a rescue ship or tugboat. It is also suitable for transporting goods, operating fish farms, servicing dredgers, oil pollution control or port works.

The Dutch shipyard Damen Maaskant Shipyards Stellendam is responsible for the final equipment of the ship.

Safe Co LTD was founded in 1995. This entirely private company was created by the experts who successfully managed a lot of different projects related to shipbuilding and offshore industry, as well as in the construction of steel bridges, in the constructions for chemical and petrochemical industry and installations in the power stations.