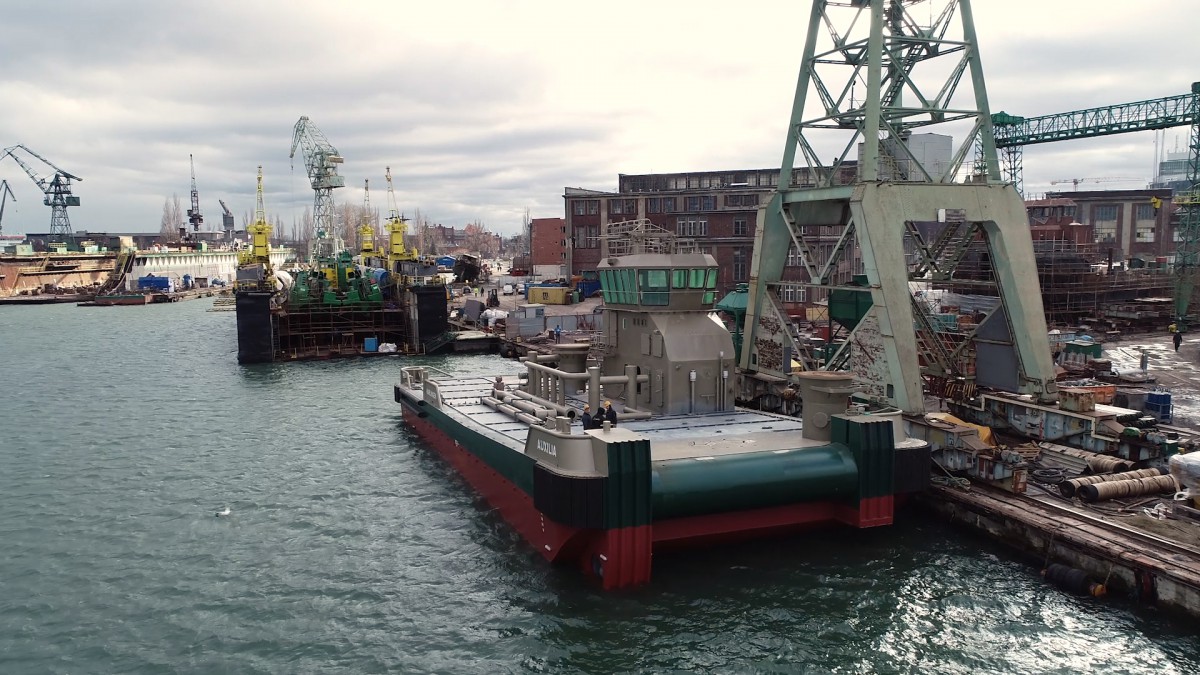 Safe Shipyard have full orderbook. The Gdańsk shipyard is currently building six ships at the same time. The first vessel, partly equipped Multicat 3515 tug, has already been completed. On Thursday it sailed from Gdansk to the Netherlands.

The Multicat 3515 tugboat (NB 571793) was ordered by Damen Shipyards Hardinxveld, a Dutch shipyard. It's a prototype vessel. Complete drive systems and full pipe systems were mounted on it in Gdansk. Multicat 3515 has also been painted there. The documentation and model were entirely made by the Safe shipyard design office, the so-called PR. The construction of the tugboat is supervised by the Bureau Veritas classification society.

The second vessel being built in the Safe shipyard is a multifunctional RSV 3315 tug (NB 571795). This one is also ordered by Damen Shipyards Hardinxveld, which will take care of its equipment.  Complete drive systems and full pipe systems will be installed in Gdansk. The tug will also be painted there. This is the second vessel of this type built by the Safe shipyard (the first one was handed over to the same shipyard in 2016). Documentation and creating model, after modifications taking into account the shipowner's comments, were entirely carried out by the Safe shipyard design office, the so-called PR. The construction of the tugboat is supervised by the Bureau Veritas classification society. Vessel will be transferred to the Dutch shipyard in March.

The third unit that Safe is currently building is fish process vessel. The ship was ordered by the Norwegian shipyard Fitjar Mekaniske Verksted AS. This prototype unit with the construction number NB 42 (symbol HFMV50) will be 49.7 m long and 11 m wide. The processing vessel, also used for transporting fresh fish over short distances, will be equipped with, among others, six RSW tanks with a capacity of 600 m3. Safe will make a steel hull, an aluminum bridge and additionally  will install a complete drive system, piping systems and paint the ship. The documentation was provided by the customer. The vessel is made under the supervision of the DNV GL classification society. It will be fully equipped in March this year.

The remaining three vessels built by Safe are fishing trawlers. They were ordered by Damen Maaskant Shipyards Stellendam. The owner of the twin-rigger units will be the Dutch fishing company Ekofish Group. Representatives of this fishing company claim that thanks to the 32-meter-long and 9,6-meter beam, the design of these ships reflects a multidisciplinary approach to shipbuliding. Together with on-board equipment, it is compatible with Ekofish's commitment to sustainable fishing methods. Installed combustion-electric power system will be a breakthrough for the fishing industry.

The first vessel in this series, with the construction number 623, is being built under the supervision of Lloyd's Register classification society. The technical project was developed by the Dutch design office Vripack, working documentation - the design office of the Safe shipyard. The fishing trawler will be fully equipped at Damen at the turn of March and April this year.

The next vessels from this series built at Safe received construction numbers 626 and 628. NB 626 is supervised by the Bureau Veritas classification society, the trawler is to be handed over at the turn of April and May. NB 628 will be handed over in September this year. The construction is overseen by Lloyd's Register.

Safe Co LTD was founded in 1995. The company operates actively in Poland and abroad, mainly in France and Germany. It focuses on construction of ships, steel bridge structures as well as structures for the offshore, chemical and petrochemical industries.