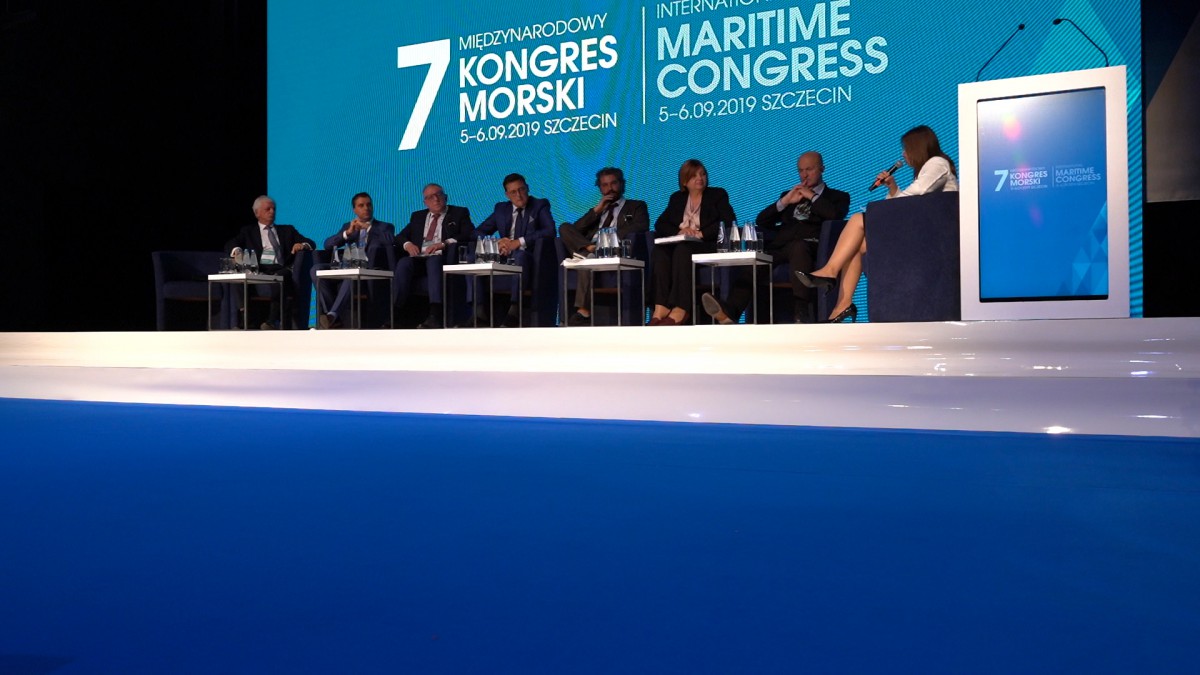 “It is not a secret that the project that we want to launch for a long time, i.e. the construction of ro-paxes, is the main task for us - Marek Gróbarczyk said in an interview with the portal GospodarkaMorska.pl. The Minister of Maritime Economy and Inland Navigation was present in Szczecin during the 7th International Maritime Congress. The event ended last Friday.

- We want to base the operation of Polish shipyards on this (construction of ro-paxes - GospodarkaMorska.pl) - said Marek Gróbarczyk.

He added that the 7th Congress "is extremely essential, because we are already talking about specific solutions, be it in terms of security or competitiveness, improving it or specific contracts that are signed, let alone the idea of ​​the Three Seas."

Krzysztof Urbaś, president of the Szczecin-Świnuoujście Seaports Management Board, in an interview with the portal GospodarkaMorska.pl presented the most important tasks for these ports for the coming months.

“Construction of a deep-water terminal in Świnoujście - at the moment we are at the stage of preparing documentation work and waiting for various decisions that are necessary for this project to occur. The next step will be to look for an investor who will finance, design, build and be the operator of such a terminal. Another challenge is certainly the deepening of the waterway from Świnoujście to Szczecin to a technical depth of 12.5 m, operational depth 11.5 m. Another such task is to prepare Szczecin to deepen this waterway. And what will start in September, maybe at the beginning of October, is modernization of the ferry terminal in Świnoujście - says Krzysztof Urbaś, president of the Szczecin-Świnoujście Seaports Authority.

- The Port of Gdynia signed an agreement with the PKP Group in order to build intermodal terminals in the country in areas which currently have Polish State Railways. They are to be built around the main track - line 201 and later the coal main line - says Adam Meller, president of the Port of Gdynia Authority.

Łukasz Greinke, president of the Port of Gdansk Authority, emphasized that Polish ports are not competing, but are cooperating.

- Together, as the three most important ports of fundamental importance for maritime economy, we implement the economic plan of our country. We are responsible for 10% of revenues to the state budget, therefore we should all have infrastructure that is replaceable, so that one port can replace another if necessary and all loads that are transhipped in our ports do not go to ports outside Poland - says Łukasz Greinke, president of the Port of Gdansk Authority.

Ports and shipyards, education and innovation

On the second day, congress participants discussed in three panels: education, ports and shipyards, and innovation. The latter was led by the publisher of GospodarkaMorska.pl portal Mateusz Kowalewski. One of the topics discussed was PCS (Port Community System) in the maritime transport service system in Poland.

- PSC will perform a similar function to all PCSs in the world, namely it is facilitating the redistribution and digitization of data where they need to be digitized in trade in Pomerania. It should be noted that the PSC itself, the "Port Community System" is not a computer application that replaces other applications or is the essence of things. We connect stakeholders who operate in the trade of goods. We can already see that we will do 90% of the system next year - says Andrzej Zelek, president of the Polish PCS company.

Jerzy Czuczman, president of the Polish Marine Technology Forum, presented the Strategy for the Development of Shipbuilding in Poland. Its main purpose is to develop this industry. The full version of the strategy was presented to Marek Gróbarczyk, the minister of maritime economy and inland navigation, during the panel.

Andrzej Madejski, president of the Polish Register of Shipping emphasized that this event is a "phenomenal platform" for PRS.

- We establish contacts to confirm our direction and our experiences. Another area is the vision for the future - we are all talking here about the future and development - says Andrzej Madejski, president of the Polish Register of Shipping.

The 7th International Maritime Congress was attended by over 600 guests from over a dozen countries, including: ministers, parliamentarians, diplomats, port presidents, heads and managers of shipbuilding and shipping companies, as well as many companies cooperating with the maritime industry.

During the official inauguration of this year's edition of the congress, a cooperation agreement was signed between the ports of Szczecin and Świnoujście and the Italian port of Trieste. It involves joint activities in areas such as maritime transport, with particular emphasis on intermodal transport, the port industry, promotion and exchange of information. Study visits of specialists from both ports are planned, focused on the exchange of good practices and mutual experiences. It is also possible to create bilateral expert teams that will implement the provisions of the signed act.

The agreement was signed by: Sergio Nardini, plenipotentiary of the Port of Trieste Board, director for special projects of the Port of Trieste Board, and Krzysztof Urbaś, president of the Board of the Szczecin and Świnoujście Seaports, in the presence of Aldo Amati, Italian ambassador in Poland, and Marek Gróbarczyk, Minister of Maritime Economy and inland shipping.