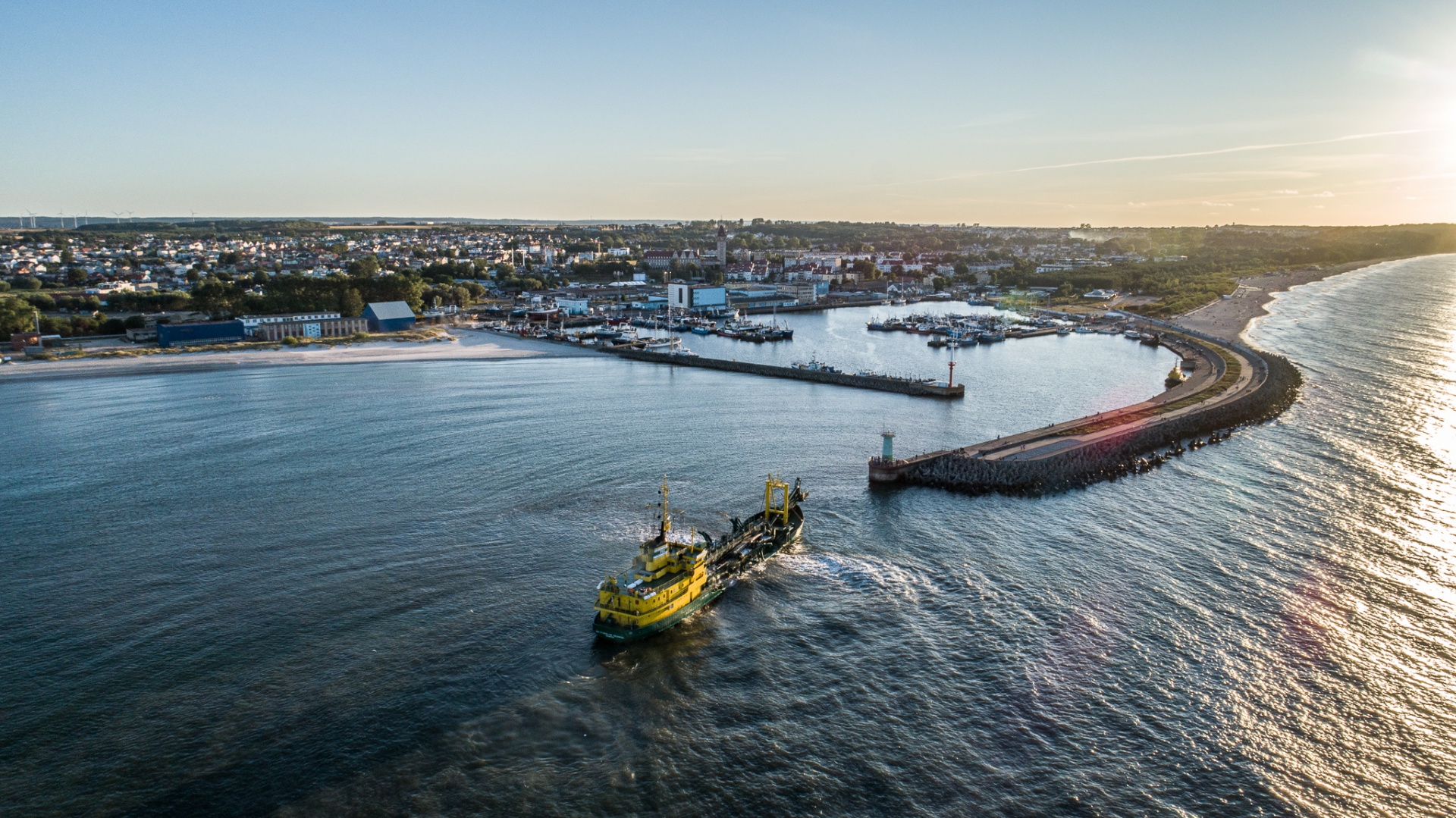 The task was performed in the formula: design and construct. In the first stage, on the selected shore section (in this case, the section from kmH 0 + 400 to kmH 1 + 000), geodetic measurements of the existing beach and shore were made, and then, based on them, an executive design was prepared and the volume of works was calculated (72 500 m3).

After approval of the project, PRCiP Sp. z o.o started working. First, an approx. 600 m long underwater silting pipeline was laid and the necessary number of land silting pipes were collected. Then the dredger "Inż. St. Łęgowski "collected sand from the settling tank and the approach fairway to the Port of Władysławowo into its own hold and pumped it to the shore through the underwater pipeline. On the shore, the output was formed with bulldozers to the designed profile. The fed section of the shore was gradually extended by adding land pipes. The final profiling of the beach was performed and post-work geodetic measurements were made, as-built documentation was prepared and the works were submitted for acceptance.

As a result of the works, the beach was widened from about 20-30 m to almost 100 m. The works were commissioned by the Maritime Office in Gdynia.

The importance of beach refilling

Artificial supply of the shore by means of silting is aimed at restoring the parameters of the beach and dune embankment, which guarantee the safety of the hinterland during storm surges, especially in the autumn and winter period. The method of silting is the best method of protecting sea shores because it is the only one that does not cause a negative reaction of the shore in the form of erosion of adjacent sections, because it is a "soft" protection, i.e. it does not create any "hard" structures on the seashore, which protect a given section of the shore, but at the same time they accelerate the degradation of the neighboring unprotected sections of the shore, and, moreover, they disfigure the sea landscape. What is more, the artificial supply of sea shores by means of silting creates great recreational places.

Refulations are made every year on the entire Polish coast. Later this year, similar works will be carried out in Ustka, on the Messinian Spit separating the Ptasi Raj reserve from the sea in Górki Wschodnie and in Wicie on the West Coast.

PRCiP owns a part of the Krakowskie Quay and storage areas with a large area. Territorially, the main area of ​​the company's activity is the Baltic Sea region and Polish inland waters, however, in the period of over 70 years of operation, the company has performed work not only in Poland but also in a number of European countries, including in Germany, Sweden, Denmark, Russia, Cyprus, Lithuania, Latvia, Estonia, Romania and Finland, thanks to which she has gained extensive experience in the field of provided services.