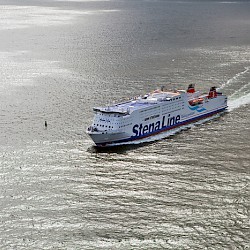 One of the world’s biggest ferry companies, Stena Line, becomes the first operator in the world to run a large 1 500 passenger ferry on methanol, drastically reducing emissions compared to today’s standard fuel - the company officially revealed on November 19, 2014.

Stena Line has decided to convert one of its ships sailing between Gothenburg and Kiel to methanol propulsion. The 240 meter long ferry Stena Germanica will be the first ship in the world to run on methanol in early 2015. The project is done in co-operation with the leading engine manufacturer Wärtsilä, the port of Gothenburg, the port of Kiel and the world’s largest methanol producer and supplier Methanex Corporation.

Stena Germanica will be converted at the Remontowa Shiprepair Yard, member of Remontowa Holding in Gdansk, Poland starting January 2015. The process is expected to take six weeks and is financially supported by the EU “Motorways of the Seas” initiative. Total project cost is about Euro 22 million.

- At Stena Line we are extremely proud of contributing to the development of our industry. Our focus has always been on innovation for the benefit of both customers and society at large and this is a prime example when this goes hand in hand. We are constantly evaluating different fuels for the future and to be first in the world with a methanol conversion is a big step towards sustainable transportation. The project has been possible thanks to the great teamwork and collaboration between our technical staff, Wärtsilä and Methanex - says Carl-Johan Hagman, CEO of Stena Line.

Wärtsilä has developed the new engine conversion kit and ship application in co-operation with Stena Teknik. The engine will be dual fuel using methanol as the vessels main fuel grade but with the ability to use MGO (Marine Gas Oil) as backup.

Methanol is a clear, colorless biodegradable fuel that can be produced from natural gas, coal, “biomass” or even CO2. Methanol plays a key role in the energy sector as a clean and cost competitive alternative fuel and energy resource. By using methanol the emissions of sulphur (SOx) will be reduced about 99%, nitrogen (NOx) 60%, particles (PM) 95% and carbon dioxide (CO2) 25% compared with today’s fuel.

From early 2015, vessels in the area around the Baltic and North Sea, known as the SECA area, will have to use fuel with very low sulphur content of 0.1% (today the fuel restriction is 1.0%). Most common is MGO which will be about 40-50% higher in price compared to HFO (heavy fuel oil) which is being used today. In parallel with the change to low-sulphur oils, Stena Line is running a number of projects to look at other alternative fuels and different techniques for emission purification such as LNG, electric propulsion and scrubbers.

- Due to our size we have a broad perspective on handling the new sulphur regulations and it is likely we will use some different types of solutions in the coming years. However, based on the results of the methanol project we are intending to convert additional ferries - says Stena Line CEO Carl-Johan Hagman.

Methanol has the potential to be an important fuel for the shipping industry in the future.  The emissions are similar to using LNG but the need for infrastructure is much less and handling is simpler. Since 2005 Stena Line has worked to reduce its environmental impact within its Energy Saving Programme, which has successfully reduced vessel energy consumption by on average 2,5 % every year.

- It is a project that involved several companies in the Stena Sphere, which makes it very special for us. Stena Line, Stena Teknik, Stena Bulk, Stena RoRo and Stena Oil have all been involved with their respective areas of expertise. This internal collaboration made this possible. Naturally, adapting and converting Stena Lines fleet of some 40 ferries to the new regulations in the near future is a very tough task which will both take time, effort and money - says Carl-Johan Hagman.