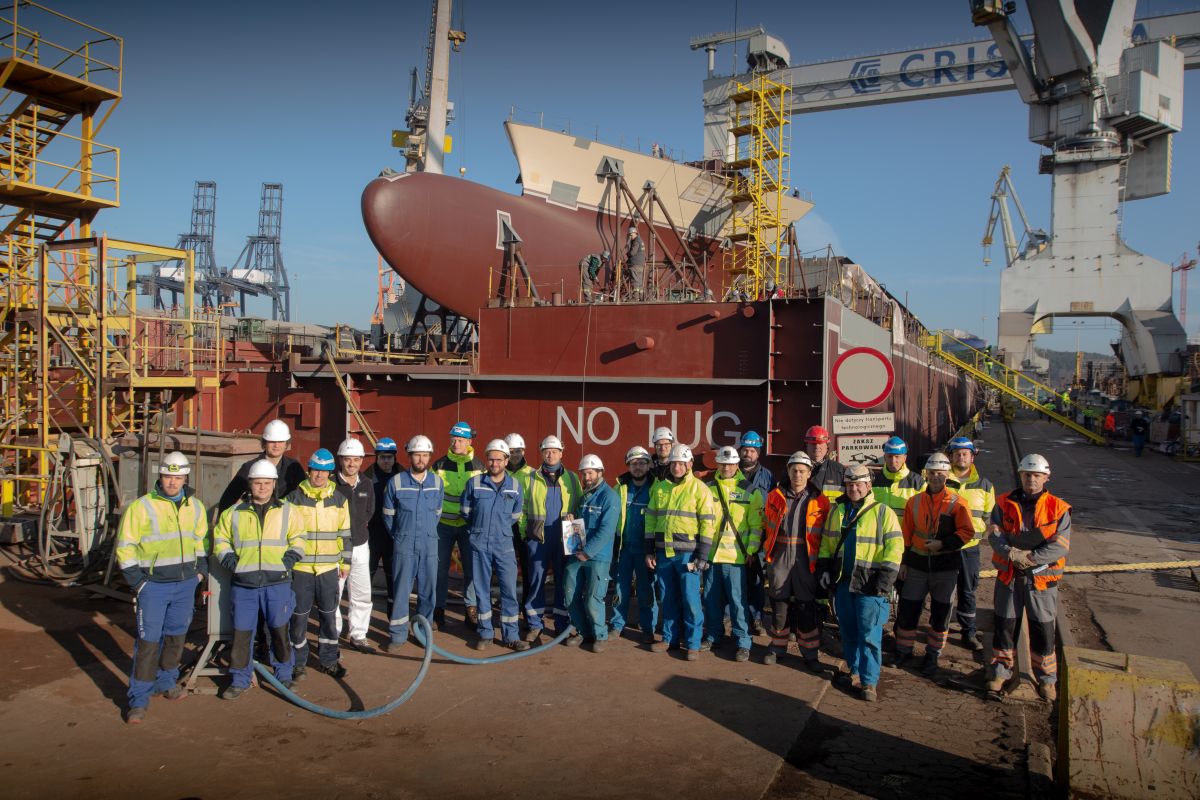 Shipyards
Three launchings in one day. Crist gives away more mega-blocks of a passenger ship - the largest that are being built in Europe [PHOTOS]

On Tuesday (November 9), another two mega-blocks with working numbers V34 and M34 were launched. These are the next huge-size blocks in a series, built and fully equipped by the Crist shipyard in Gdynia. The blocks were built for the French shipyard Chantiers de l'Atlantique. On the same day, the shipyard also launched a hybrid ferry for the Finnish operator.

The shipyard informs that the blocks are fully equipped with the standard of the finished vessel. This means that they are fully painted, equipment has been installed, and the blocks have all ship installations ready. The installations have been completely checked to the highest standard, and the whole is fully certified.

Mega block V34 on its way to France

The mega-block with the working number V34, which left for France on November 11, is part of a passenger ship for one of the largest shipowners – MSC.

- The name of the ship is: MSC EURIBIA and it will be one of the largest passenger ships in the world. It is worth noting that the ship will be a hybrid fueled by light diesel fuel and LNG - informs the Crist shipyard.

The part built by the Gdynia shipyard is a midship along with a part of the engine room where specialized pipelines for gas fuel transmission have already been installed, in the next stage huge LNG tanks will be installed.

The total weight of about 9,500 tons, 30 km of pipelines (all types: from steel, stainless steel, copper, to plastic, fiberglass and highly specialized LNG), 100,000 square meters of painted surfaces, 800 tons of all types of equipment.

- This is another of the mega blocks provided by Crist. The best proof of a job well done by Crist is the satisfaction and appreciation of the representatives of Chantiers de l'Atlantique and MSC - informed the shipyard.

Launching is another milestone in the construction of the vessel. Works are taking place according to the schedule.

- The outfitting works on the vessel will begin soon, and at a later stage the preparation of the vessel for the tethered and sea trials. The handover of the vessel to the shipowner is scheduled for the first half of next year - the Crist shipyard reported.

The ferry will be powered by shore-charged batteries. Combustion power generators will be used as a backup power source for the unit, used in bad weather conditions or large accumulation of ice on the route. The new unit will be 100.5 m long and 17.4 m wide. It can accommodate 90 passenger cars and 372 passengers. The unit is to be operated by a 3-person crew.

Crist Shipyard was established in 1990. In 2009, Crist bought the land of the former Gdynia Shipyard.

The Gdynia-based company produces, among others, specialized hydrotechnical devices and vessels for the world's largest customers. As the only shipyard in Europe, it has already built three units for setting up and servicing offshore wind farms.