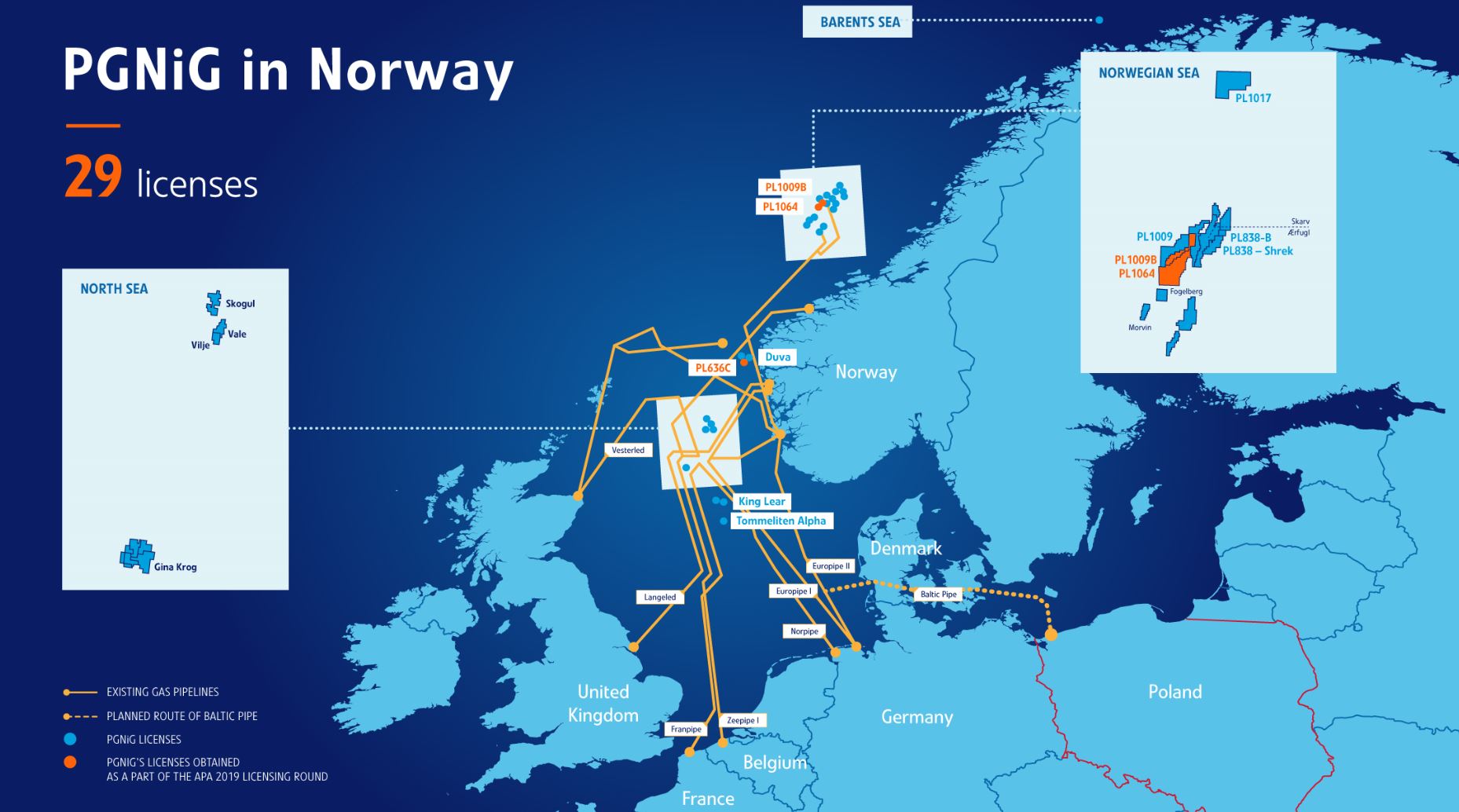 Polish Oil and Gas Company has enriched its portfolio on the Norwegian Continental Shelf with new exploration licenses. It was awarded as part of the Awards in Predefined Areas (APA 2019) by the Norwegian Ministry of Petroleum and Energy. Thus, the number of concessions on the shelf in which the PGNiG Group holds shares increased to 29. It has status of the operator on four of them.

PGNiG Upstream Norway, a subsidiary of PGNiG SA, was among the 28 oil companies operating in Norway that were granted new license areas. Applications were reviewed and ranked based on geology and technology content. Two of the newly received licenses - PL1064 and PL 1009B are located in the Norwegian Sea, while the PL636C license in the North Sea.

“In line with the strategy of the PGNiG Group, we are developing production of hydrocarbons on the Norwegian Continental Shelf. After 2022, natural gas extracted and purchased there will constitute a significant part of the commodity used by Polish individual customers and entrepreneurs,” commented Jerzy Kwieciński, President of the PGNiG Management Board and added: “Our enterprise in Norway is an example of the high business position that Polish companies have achieved in recent years on the international market”.

The PL636C license is an extension of the PL636 license, which includes the Duva natural gas and oil field. PGNiG currently holds 20 percent shares. Takeover of an additional 10 percent shares in Duva as a result of last year's transaction with Pandion Energy was recently approved by the Norwegian authorities. The operator on this field is Neptun Energy Norge (30 percent shares), and next to PGNiG, the other partners are Idemitsu, Pandion Energy and Solveig Gas Norway.

The PL1009B license is an extension of the PL1009 license, where PGNiG plans to drill an exploratory well in cooperation with ConocoPhillips by the end of 2020. In this license, PGNiG received 35 percent. shares, and the role of the operator is held by ConocoPhillips (65 percent).

License PL1064, in which PGNiG received 30 percent shares, is located near the Skarv field, in the immediate vicinity of the PL1009 and PL1009B licenses.  ConocoPhillips became its operator (40 percent shares), and the second partner next to PGNiG is Aker BP (30 percent).

Over the past three years, PGNiG has increased its recoverable reserves of natural gas and crude oil in Norway from 80 million to around 200 million barrels of oil equivalent (boe). During this period, PGNiG Upstream Norway acquired shares in the Skogul, Fogelberg, Tommeliten Alpha, King Lear and Duva fields. It also discovered the new Shrek field and significantly accelerated the development of the Ærfugl field.