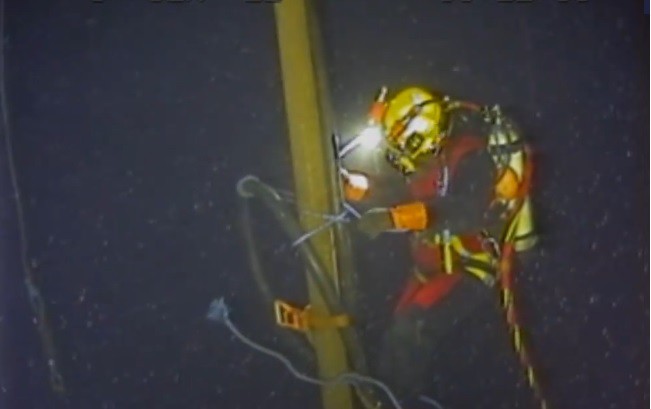 The Petro Giant oil rig is working on the reconstruction of drillings in the B3 deposit in the Baltic Sea. The depth of the sea here is 80 m, while the distance from the mainland is 67 km. Work at such large depths requires specialized diving-saturated work.

Divers descend into the water from the deck of the platform on which the apparatus used during work and the entire diving system is installed. In a special bell, divers are lowered to the necessary depth (here 70-80 m) and carry out repair work on the installation. At this depth in a saturated dive, the diver can work for 4 hours (then his colleague changes him). This gives 16 hours of divers' work in a 24-hour cycle.

The Petro Giant platform, owned by LOTOS Petrobaltic, is conducting reconstruction of seven drillings on the Baltic deposit B3, which is located in the maritime area of ​​Poland in the geological region of Synekliza Bałtycka - Łeba Block. It was drilled in November 1995 as a vertical borehole with a final length of 1532 m. The goal is to increase hydrocarbon production from the Polish economic zone of the Baltic Sea. This is the first task of this largest unit belonging to the Gdansk group.

LOTOS Petrobaltic purchased the Petro Giant platform from MAERSK in June last year. It is the fifth and largest of all units at the company's disposal. Built in 1986 in Japan, the platform was fully modernized in 2012. Previously it belonged to a Danish shipowner based in Copenhagen and operated in the North Sea. Now it flies under the Polish flag. Before Petro Giant was towed away to its current workplace in December, it  was properly marked and adapted to the needs of working in the Baltic Sea.

LOTOS Petrobaltic as the only one for 30 years has been conducting exploration and extraction of hydrocarbons in the Polish economic zone of the Baltic Sea. Together with its subsidiaries, it focuses on operational and service activities, i.e.: exploitation of the B3 deposit, development of the B8 deposit to launch full production, implementation of exploration projects in the Baltic Sea and land concessions in Poland. At the same time, the company develops its engineering, executive and design competences for the offshore sector, ultimately with the option of providing services outside the LOTOS S.A. Group.

You can watch the divers work here: