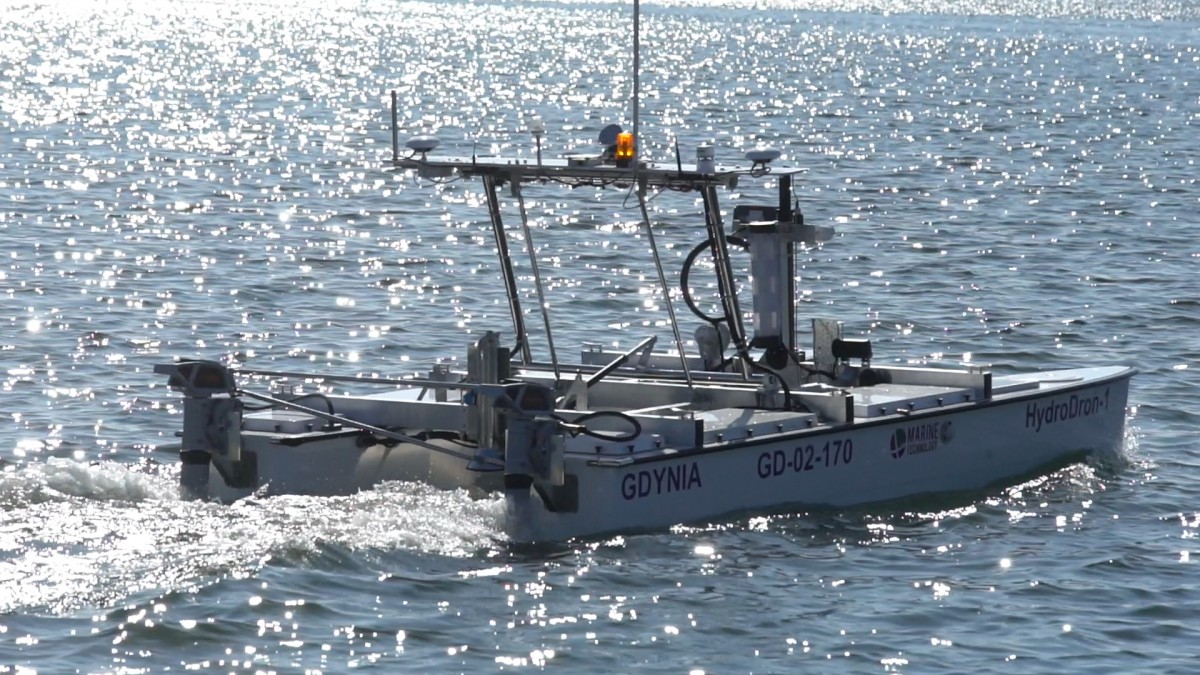 HydroDron is a modern, unmanned vessel designed for hydrographic surveys. The first such floating platform in Poland, constructed by Marine Technology, was tested at the National Sailing Center of the Academy of Physical Education and Sport in Gdańsk earlier this week. We watched her in action with our camera.

- We are testing the HydroDron in realistic conditions, on water. We tested hydrographic surveys, measure depths, examine the bottom with sonar and test anti-collision. Among others we teach HydroDron how to deal with situations when it encounters another object - explains prof. Andrzej Stateczny, president of Marine Technology.

The two-day tests went according to plan. HydroDron used artificial intelligence to cover the planned route.

HydroDron can perform underwater measurements and create maps on limited waters, i.e. in ports, on roads, lakes or lagoons. Professor Stateczny announced that Marine Technology was currently preparing for serial production of this unit. Maritime Office in Szczecin, Maritime Office in Gdynia and the Port of Gdynia Authority are already interested in purchasing it.

- HydroDron is, as I call it, quiet and odorless, it has an electric drive, it does not make any noise, it does not smell, it does not emit fumes, so it is such a future ecological unit that could carry out such hydrographic measurements on every body of water, also on protected waters, on silence waters, or even in national parks, if there was a need - says prof. Staid.

The autonomous HydroDron is a 4 m long, 2 m wide catamaran with a slight draft: from 20 cm in the fore part to 50 cm in the aft part. Its maximum speed is over 10 knots The vessel's batteries guarantee system operation for up to 12 hours at a measuring speed of 4 knots.

The autonomous HydroDron is controlled from the shore station, which consists of two consoles: a dedicated navigation console with an industrial computer built into the transport box (and an additional small maneuvering console for short-range maneuvering, including mooring) and a hydrographic console with a Getac computer.

HydroDron is very mobile. To make measurements, simply place it on a car trailer or other larger vessel, then launch from the beach, shore, wharf, bridge or base ship.

The Marine Technology team, i.e. navigators, hydrographers and programmers will be working on improving the HydroDron by October this year. The cost of building the unit is over PLN 2.5 million, of which over PLN 2 million was obtained from the National Center for Research and Development as part of the EU Intelligent Development Program.

HydroDron has already won the first awards. At the BALTEXPO 2019 in September this year, it received a distinction in the "Golden Anchors" competition, and last weekend as a leader in innovation for micro and small enterprises in the competition for the Pomeranian Economic Griffin Award 2019.

Marine Technology has been conducting research and development in the field of technical sciences since 1998. He works with a wide range of experts in the fields of navigation, hydrography, geoinformatics, geodesy and cartography, computer science, as well as graduates of the Maritime University, which provides the company with combining experience with youthful ingenuity. The company undertakes a variety of research topics, using modern technologies and focusing on innovation. An extremely important issue that distinguishes a company is the search for issues with realistic chances for practical implementation.