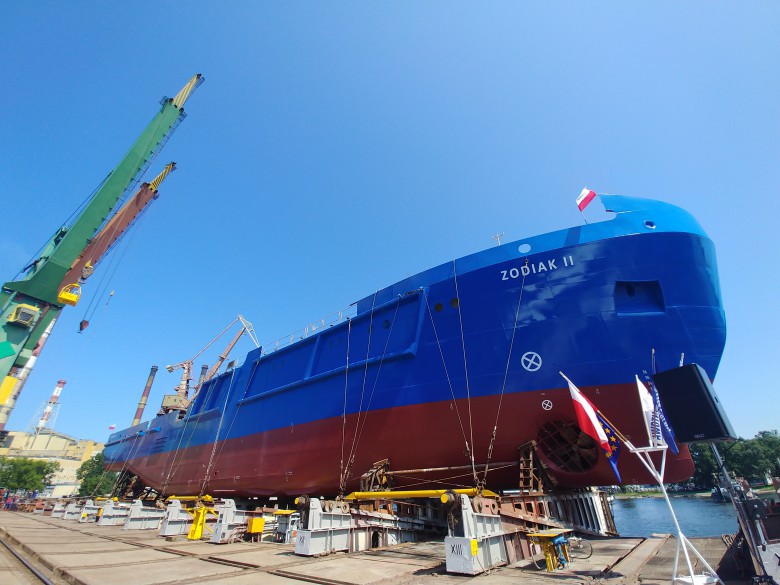 Today, Zodiac II – a multi-purpose ship for the Maritime Office in Gdynia – sailed for sea trials. The ship built in Remontowa Shipbuidling SA from Remontowa Holding Capital Group will soon be handed over.

– The sea trials will last from three to four days, on the fourth day a bollard pull trial will be carried out to determine the horizontal towline force which the main propulsion systems can generate at a vessel speed equal to zero knots – – said Krzysztof Radzikowski, project manager for the construction of two ships for Maritime Offices.

The handover of the ship to the Maritime Office in Gdynia is planned by the end of July.

Zodiac II, with construction number B 618/1, is the first of the two twin ships for Maritime Offices in Gdynia and Szczecin. The contract for the construction of these two ships was signed on 5 March 2018 at the headquarters of the Maritime Office in Szczecin. On 20 August 2018, the ceremony of burning metal sheets for the Zodiac II unit took place, and already after two months, on 29 October 2018, the keel for its construction was laid. The launching took place in July last year.

Both ships, 60 m long, almost 13 m wide and with a draught of 3.5, will reach a speed of 13 knots. Ships will be equipped with a diesel-electric propulsion system allowing for flexible use of power while performing various functions. They are designed, among other things, to transport, operate, replace and control sea-going tides, carry out hydrographic measurements, towing works, fight against oil spills and ice breaking in water bodies. Additionally, ships will be able to serve as support units for other sea rescue and firefighting services.

Both units are built according to the design of the Remontowa Marine Design & Consulting from Remontowa Holding Group.