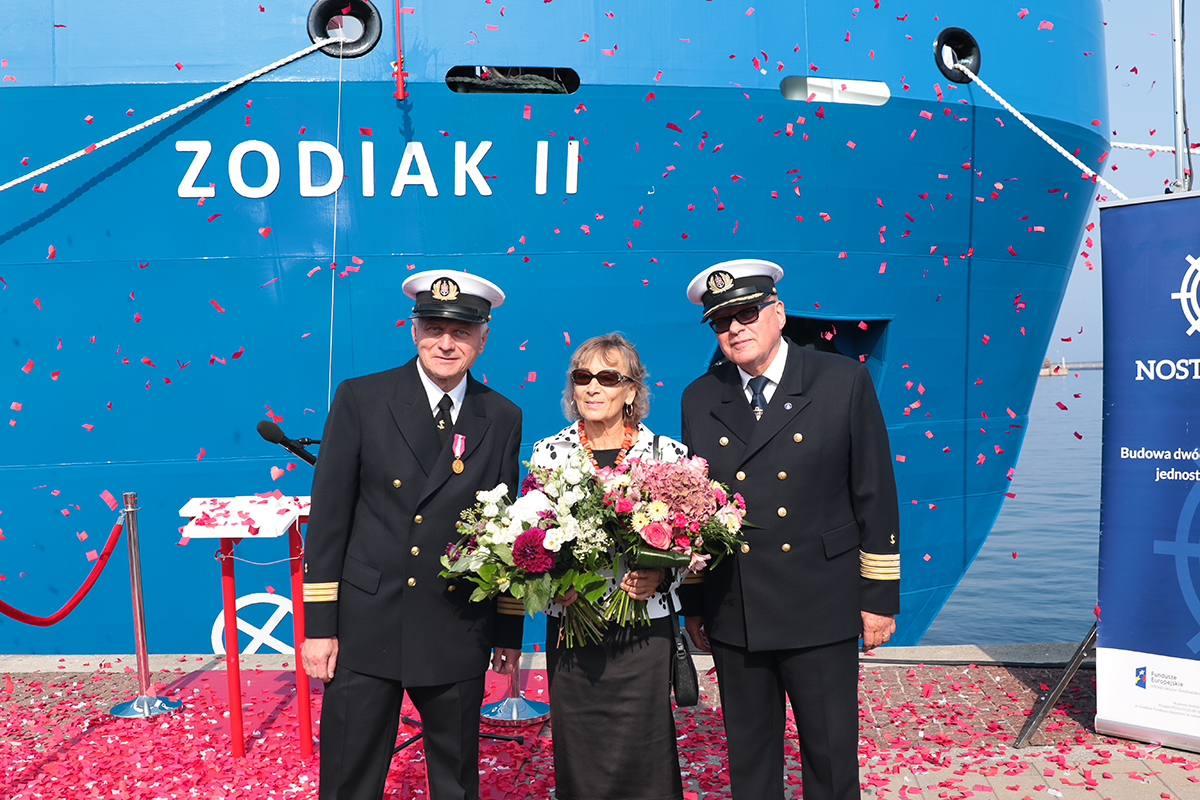 Shipyards
Zodiac II for the Maritime Office in Gdynia – ceremony

On 25 September, at the Pomeranian Quay in Gdynia, a christening ceremony was held and the flag was raised on the multi-purpose ship ‘Zodiac II’, built in the shipyard Remontowa Shipbulding SA of the Remontowa Holding capital group as part of a project managed by the Maritime Office in Szczecin.

The ship was built according to the design made by the Marine Design & Consulting design office belonging to the Remontowa Holding. The second, twin vessel – Planet I will be operated by the Maritime Office in Szczecin. The launching took place in October last year. The work on the vessel is proceeding according to the schedule and will be handed over to the Ordering Party at the turn of October and November.

Both vessels, 60 m long, almost 13 m wide and with a draught of 3.5, will reach the speed of 13 knots. They will be equipped with a diesel-electric propulsion system allowing for flexible use of power while performing various functions.

– This vessel combines the features of a hydrographic unit, icebreaker, firefighter, rescue vessel, to combat oil spills – these are the main functions worth mentioning, because it shows how the administration is already fully entering the 21st century – said Wojciech Zdanowicz, Director of the Maritime Office in Szczecin, adding that there are no worries about this vessel, because it was built in a Polish shipyard from the Remontowa Holding capital group under the supervision of a recognized classifier of the Polish Register of Shipping SA.

– I want to thank the shipowner, i.e. the Maritime Office, for the good and constructive cooperation and friendly atmosphere every day that accompanies the construction of both ships. Already today I invite you to look out on the waters of the Gulf of Gdansk for the twin vessel Planet I, which will start its sea trials at the beginning of October and will be handed over this time to the Maritime Office in Szczecin at the turn of October and November – said Marcin Ryngwelski, President of the Remontowa Shipbuilding SA. – The construction of ‘Zodiac II’ was a big challenge for us. The shipowner set clear requirements – the ship is to be multi-purpose and modern – it was filled with the most modern electronics and all propulsion and maneuvering systems that are available on the shipping market today – said Marcin Ryngwelski.