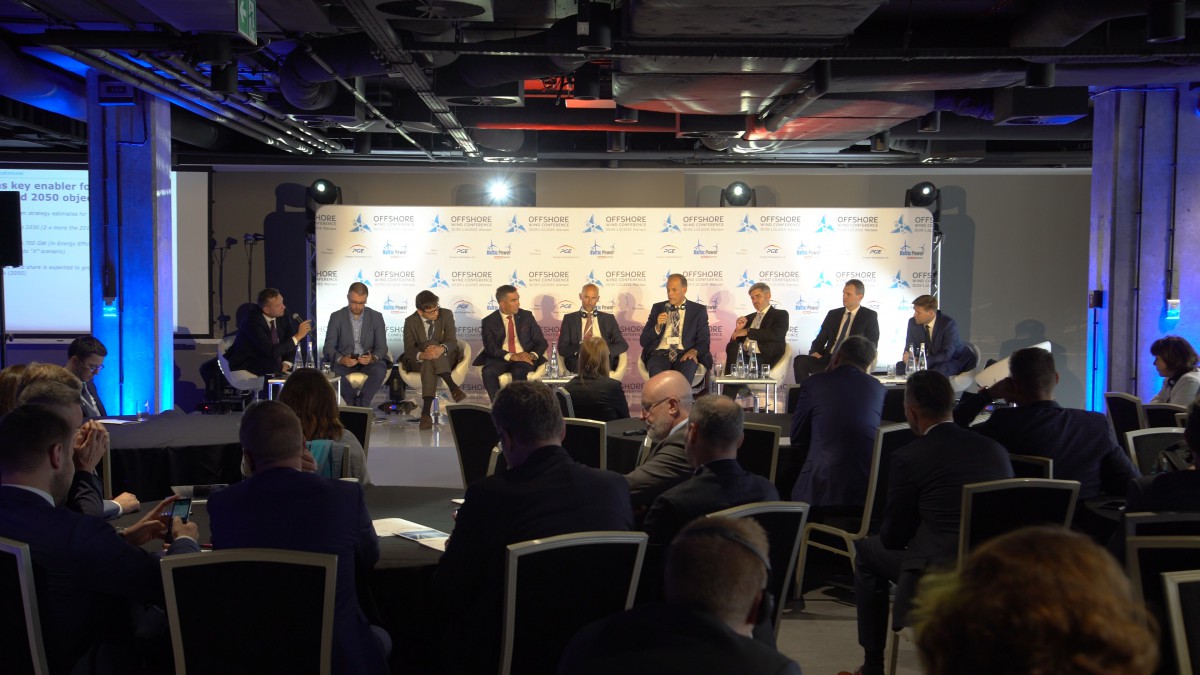 “There is no other direction for Polish energy than wind farms.

In the near future, offshore wind energy will become the driving force behind the Polish economy. According to the Polish Energy Policy until 2040 (PEP 2040), by 2027, the first offshore investments are to be built, and by 2040 10 GW will be installed in offshore wind farms. The act on offshore wind energy planned by the Ministry of Energy, preparation of the spatial development plan for Polish maritime areas and the supply chains were discussed during the Offshore Wind Conference, which was held on 30.09-1.10 in Warsaw.

Offshore development will not only be Polish chance for development, but also a big challenge for their energy system in the medium and long term. In addition to the necessary legal regulations, the growing share of zero and low-emission sources entails the need to increase the flexibility of the power system operation and large expenditure on modernization, expansion and distribution of the transmission network, especially in the context of the possibility of connecting offshore wind farms to the power grid.

Minister of Energy Krzysztof Tchórzewski said: "The issue of whether offshore regulations will be included in a separate act or we will amend RES Act is still open. There is no dogma in this matter." He also added that he didn't see any major threats when it comes to offshore wind energy in Poland. The minister admitted that he would like the law expected by the industry to enter the parliament later this year.

In the coming decade, Poland must adhere to the EU target of 32 percent renewable energy in 2030. Poland must transform its energy mix so that in 2030 it has a 21-percent share of renewable energy sources in final consumption in all sectors and 27 percent in electricity production. Polish suppliers already have significant potential in ensuring the supply of structural elements and services related to the construction and operation of offshore wind farms. Currently, almost 100 Polish entities have knowledge and experience in this field.

A similar view is expressed by Jan Staniłko, director of the Investment Department at the Ministry of Entrepreneurship and Technology: "Technically Polish companies are already participating in various projects in Europe, so they will have to consistently adapt their production capacity to growing orders. The basic task is to set very clear time and stage goals so that all the necessary documentation can be made in the shortest possible time. Many tasks are still on the side of public administration. "

Most guests pointed to the need for changes in regulations in the area of energy law regulations, admitting that they are eagerly awaiting the completion of works on legal assumptions for the development of offshore wind energy. The changes should introduce new system solutions in the area of the operation of renewable energy investments in the Baltic Sea, which will allow for the development of the offshore wind energy sector in Poland.

Zbigniew Gryglas, MP of the Republic of Poland and chairman of the parliamentary team for offshore wind energy said: "This offshore wind energy project will lead to the development of a new sector of the Polish economy. As calculated by external consultants, this is a development impulse that will bring about 70 billion zlotys to the budget of our country.

As experts emphasize, there is no doubt whether investing in offshore wind energy will be profitable. Its development is to be an impulse for the economy worth about PLN 70-80 billion annually.

Janusz Gajowiecki, president of the Polish Wind Energy Association said: "Wind farms in the Baltic Sea are very profitable. Our investors, who have already carried out a series of wind measurements in the Baltic Sea, did not expect such positive, high results. On average, the wind in the Polish Baltic zone exceeds 9m / s per year; these are extremely good results that also directly translate into the costs of this technology. Today, offshore wind energy, according to these measurements, will be able to work for over 90% of all days of the year. (... ) Virtually no conventional technology in Europe today can match the prices for producing 1 MW from offshore wind farms. "

Gajowiecki also emphasized that PWEA, together with training companies located in northern Poland, submitted an application for funding for the creation of the Polish Training Center, which will train 300 people a year for 5 years. The training will be related to the service, installation and all operation of wind turbines. It will be targeted especially at people previously associated with the coal sector.

During the second panel discussions took place about the infrastructure and preparation of the production facilities (supply chain) and ports themselves.

Lucjan Gajewski, operational director of Mewo SA shared his experience in offshore sector: "Being in the West, we watched how ports were developing in the direction of offshore. From very unattractive, only fishing ports, huge offshore service centers have now grown; we should take advantage of their experience. "

As Beata Szymanowska, head of the research and technology development department of the Port of Gdynia Authority said: "The port is prepared in approx. 85-90 percent. By the end of 2023, numerous investments will be completed, such as deepening the approach track to 17 meters. The length of the quay is suitable for the offshore industry. In the last 3 months we have met with a large number of stakeholders, including investors who will build these offshore wind farms, as well as with turbine and other components producers that will be necessary for the production of components wind farms."

President of the Gdynia Maritime Agency, Michał Śmigielski, said that container terminals, due to their powerful transhipment structures, can be used to load tower structures for offshore.

Wojciech Szymulewicz, president of the board of BCT terminal said: "Our and our port's management development plans should include new potential and new areas where such facilities should be prepared. I believe that there are such opportunities in the port of Gdynia."

DCT Gdańsk Commercial Director Dominik Landa admitted that the terminal development plan is not dedicated directly to offshore, but he did not rule out this possibility in the future: "At the moment we will focus on our project, which is called T3. We will expand our transhipment capacity with another terminal with a capacity of about 2 million TEU and there is a chance that we will have infrastructure that will be suitable for transshipment of wind farms. "

Jan Jarmakowski, member of the board of Gdynia Container Terminal SA said: "From the point of view of the country's energy security and energy costs in the long run, construction of wind farms is extremely important. There is basically no other direction for the Polish energy sector than wind farms. Economically these are important projects and we should talk about it, everyone within their competence. "

Daphne Bergsma, Ambassador of the Kingdom of the Netherlands as also present at the conference. She said: "This is a huge field for cooperation for small and large companies from our countries. According to the popular idea in the Netherlands - it is not only about economics or only ecology, but about these two issues hand in hand and I hope we will work on it together. "