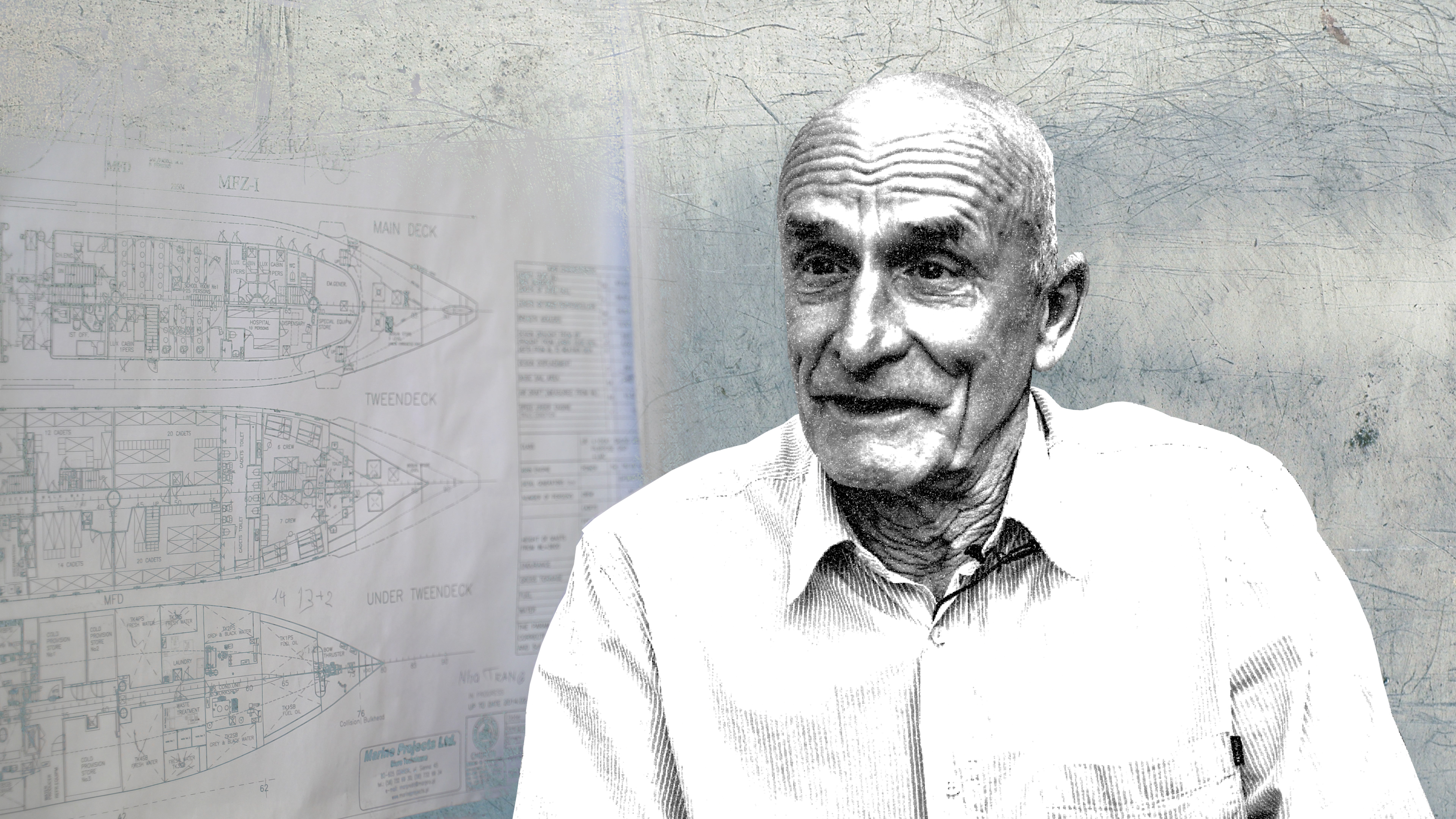 Yachts, Boats
His name is known in every shipyard in the world - the „father of sailing ships” - with a new project (interview)

Brzozowy Kat, a village in Podlasie. Rummaging through some trunks in the attic, little Zygmunt finds copies of "The Sea" monthly. Following the instructions, he builds model ships by folding paper. Later, he improves his designs by constructing a ship from a pig's trough and then building a wooden canoe with a friend. Today, there is no man in the world who has designed more sailing ships than he has, but Zygmunt Choren has no thoughts of retiring. On the drawing board of his office, a project has been drawn up of a worthy successor to the legendary Pogoria.

How did it happen that a boy from Podlasie ended up by the Baltic Sea and earned the name of the "father of sailing ships"?

There is always a kind of magic in stories like this. I grew up in the small village of Brzozowy Kat, where no one had ever seen or heard of the sea. Over 60 years ago, while rummaging in the attic, I found in a trunk an issue of "The Sea" monthly with a photo of the Dar Pomorza. This magazine became my window to the world. I read every new issue and started dreaming of long voyages and traveling.

You took your first steps as a designer in your childhood

It started with paper ships, and a little later I constructed my first sailing ship from a pig's trough, which I launched in the spring in a drainage ditch, hoping it would reach the sea. In "The Sea" I also found instructions on how to build a wooden canoe.

“The Sea" brought you to Gdansk?

First, I managed to get on a two-week cruise organized by Jerzy Micinski, the editor-in-chief of my favorite magazine. It was a dream come true and at the same time ensured the sea was my future. After graduating from high school, I came to Gdansk and chose to study at the University of Technology, in the Shipbuilding Department. I immediately joined the yacht club operating at the university. Among other things, I sailed on the "Szkwal" and the sailing practice was very useful for me later at work. I was also lucky that my professors were outstanding personalities: prof. Wysocki, prof. Potyrala and prof. Rylke. I was in good hands and I knew that my studies were interesting and very fruitful.

Do you remember your first job after graduation?

In fact, I immediately found myself at the University of Technology with prof. Kobylinski working in a model pool. The ships I dealt with were not only to be safe, but also fast, so that people would like them. This broadened my knowledge, which was useful later in the design work.

Did you already know then that you would be a designer of sailing ships?

I liked sailing. I moved from the University of Technology to Gdansk Shipyard, which was another lucky coincidence. The Yacht Club of Gdansk Shipyard was very active there, bringing together, among others, some fantastic design office employees. We were able to go on a yearly cruise around the world and take part in the Whitbread Round The World Race.

During this voyage you experienced a very dangerous situation

That's right, we were hit by a vertical wall of water moving at tremendous speed. It broke over the deck and sliced the aft mast. Fortunately, our crew did not panic, although a lot of water was pouring inside the yacht. We towed the severed mast on ropes and sailed to Sydney. After that event, I gained respect for the water. I realized that the most important thing to keep in mind on a ship is stability. Once in a hundred years there may be a squall that will knock even the best sailing ship onto its side, but a well-designed vessel should withstand it. The range for the righting arms I created for my ships is about 90 degrees, so even if they are forced on their side and the masts almost go into the water - the ships have to right themselves.

What was it like to get back to work after a year-long cruise around the world?

After my return, sailing became fashionable and my director called me over and asked: “Choren, do you want to build? Do you want to design?" I agreed right away. Then Krzysztof Baranowski appeared, who wanted to order a ship for youth training in Finland. I thought that was a fantastic opportunity for Gdansk shipyard and convinced him that it was better to build such a vessel in Poland. We explained to the director that if we manage to create a small “Pogoria”, we will be able to build “Dar Mlodziezy”. Later on, the then head of television, Maciej Szczepański, was keen on the idea of having his own sailing ship and the story gained momentum. And we succeeded in creating this “Dar Mlodziezy”.

The shipyard was not afraid of new challenges then, it was a period of splendor for the Polish shipbuilding industry. It is hard to believe, but every 10 days, a ready-made seagoing vessel went out to sea from Gdansk. We were the second shipping power in the world.

What does the Polish shipbuilding industry look like today from your perspective?

We have not been completely depressed by the transformation, so there is hope for the future. We are still building ships. It is true that not as many as before, but we have not given up. Every now and then we hear about new vessels leaving Remontowa. There are many ambitious design offices on the Tri-City market and Poland is a power in the yachting industry. I hope we will continue to build sailing ships as and when they are needed.

Why do you think we need sailing ships?

The people responsible for educating future professionals have concluded that the best school for future officers is on the deck of sailing ships. Such cruises teach real life, and allow you to get to know and understand the sea and the dangers associated with it. An indispensable element of sailing is also the ability to cooperate and the awareness that not everything depends on us. By promoting sailing, we simply get better people, who are more enlightened and more aware. An interesting book was published by Slawomir W. Malinowski, in which he quotes the words of General Mariusz Zaruski: "I swam, got wet and dreamed on board yachts, not to make you athletes, but because you, as Poles, would get to know the sea and feel with it, recognize it as your own, priceless value, without which there is no life for today's Poland”.

On the walls of your office I can see more sketches of a sailing ship. Is this another project by Choreń Design & Consulting?

That's right, we're designing a brigantine now. We've focused all our experience on building a good, safe, ecological and cheap-to-operate vessel for training young people in the maritime industry. Believe it or not, it's been 40 years since the Pogoria was built. Over 30,000 girls and boys have been trained on board. But I think the time has come for a new and better ship to replace her. I am convinced that the new project is a worthy successor. We are now waiting for funds to build it.

Who could the new brigantine serve?

They must be people who have not lost their pro publico bono instinct. Sailing ships should not be commercial units dedicated to earning money. I would like these ships to be operated by sailing clubs of the class I remember from my youth. The new vessel has the working name Rewa, because there is a very ambitious sailing club there, which in my opinion continues the best traditions. Another organization that could make use of the new sailing ship is the Christian Sailing School in Pelplin, which is planning a cruise around the world. I think a lot of sensible people see the benefits of the sea in raising young people, and in youth rehabilitation. It is a way to get to know both the world and yourself. Our project has already received positive opinions from the captains of sailing ships, and the approval of the DNV GL classification society. However, there is no financing for construction. Both Rewa Yacht Club and the Christian Sailing School received a promise of funds for the construction, but due to the coronavirus pandemic, the topic of the new brigantine has been pushed to the background.

Don't you regret that you didn't become a sailor?

The seafarer's life has changed dramatically. It used to be fun, the ship entered the port for two weeks, where it was unloaded, sailors had the opportunity to visit the area, and make friends around the world. Today, reloading takes several hours and the crew does not even have time to disembark. I think I have had a happy life because I managed to get a job that I enjoy.

You designed the most famous and largest sailing ships in the world. Have you ever thought about going on a cruise now? To get some rest?

I would like to build at least the three sailing ships I talked about and a fourth one a little larger. In my philosophy, being in so-called well-deserved retirement is just slowly waiting for death. As long as I have steam in my lungs - I will design.

Known as the "father of sailing ships". Born in 1941. He designed and supervised the construction of the most famous sailing ships which sail today under the flags of Poland, Bulgaria, Russia, Ukraine, Germany, Finland, Japan and Panama. From his hand came, among others, the Pogoria, Iskra II, Fryderyk Chopin, Royal Clipper, as well as the Dar Mlodziezy and Mir. Constructor. These ships stand behind the structure of the three-masted ship Oceania, belonging to the Institute of Oceanology of the Polish Academy of Sciences, which is currently the largest Polish institute researching the problems of the physics, chemistry, biology and ecology of the sea. He also designed the largest sailing ship in the world - the Flying Clipper. Since 1992, he has been running the company Choren Design & Consulting in Gdansk, Morena.