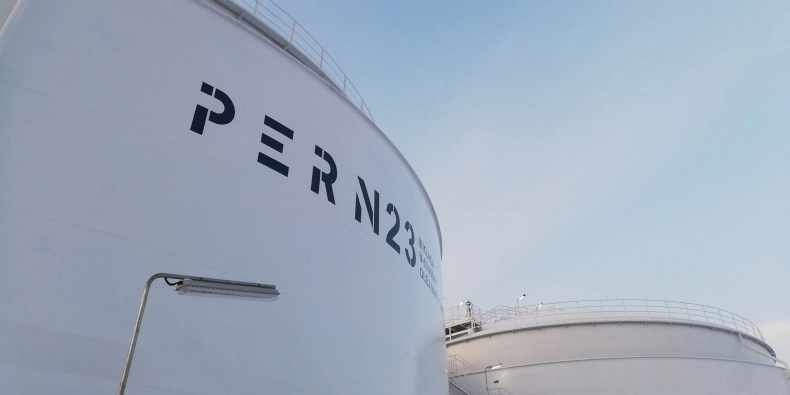 Polish pipeline operator PERN intends to increase the capacity of the fuel depot in Dębogórze (Pomeranian Voivodeship). The company has announced a tender for design works as part of the construction of 3 tanks, with a capacity of 50 thousand cbm each, intended for the storage of petroleum products along with the accompanying infrastructure.

"The task in question includes the preparation of complete design documentation for the construction of tanks with a capacity of 3 x 50 thousand cbm for the storage of class III petroleum products along with the accompanying infrastructure at the fuel depot no. 21 in Dębogórze", the company announced.

PERN pointed out that the subject of the proceedings includes also making all necessary arrangements with the competent administration authorities and obtaining the essential administrative decisions enabling the construction and use of newly built tanks and, on the basis of the option right, to perform author's supervision during the construction.

The company noted that it will also be crucial to design the infrastructure necessary for the construction, commissioning and operation of new storage tanks, including e.g. designing the terrain and communication around the newly built facilities, designing additional technological pipelines ensuring connection of the tanks to the existing technological systems of the fuel depot in Dębogórze, and designing telecommunication and video monitoring system.

According to the company, the deadline for putting the investment into operation has been set for September 11, 2023.

Earlier PERN informed that the expansion of storage capacity for crude oil and fuels is part of the priority Megainvestment Programme, which has been successively implemented there for several years, for which the company has so far allocated over PLN 1.4 billion pln. Its goal - as it was emphasized - is to increase Poland's energy security.

In the case of the base in Dębogórze, where fuel delivered by ships is accepted, apart from new tanks, the railway front was also modernized in order to increase the capacity to receive products, and to ensure their increased dispensing. PERN announces that thanks to these investments, the base will be able to transport at least 6 trains a day, 30 tankers each, i.e. approx. 2 thousand cbm fuels.

In late July this year, PERN reported that over the last 6 years the capacity for fuels in Poland has increased by one third, i.e. by nearly 0.6 million cbm, and the company has built 20 new tanks during this time – just in July 7 of them were delivered for operation, including 1 at the Fuel Depot in Dębogórze.

PERN is a state-owned entity, strategic for Poland’s energy security, responsible for e.g. pumping crude oil through pipelines to domestic refineries: PKN Orlen in Płock and Lotos Group in Gdańsk, as well as to two refineries in Germany, and for the storage of both crude and liquid fuels at depots across the country. The company also provides fuel transport services, including petrol, diesel and heating oil. The company has 19 fuel depots throughout the country, the potential of which after expansion is approx. 2.4 million cbm of petroleum products and four crude oil depots with a total capacity of over 4.1 million cbm.

Most recent
Infrastructural investments of the Port of Gdynia and PERN
2021-05-06
Another investment at the Port of Gdansk is entering the main phase of implementation - leak testing of PERN Oil Terminal tanks [photo, video]
2020-05-18
Naftoport and the PERN Oil Terminal in Gdańsk – Poland’s window on oil
2018-04-30
General Director of the Baltic Hub: After expansion, the terminal will reload up to 4.5 million TEU
2022-12-16
SHOW MORE
Meet innovative companies from Poland
SHOW