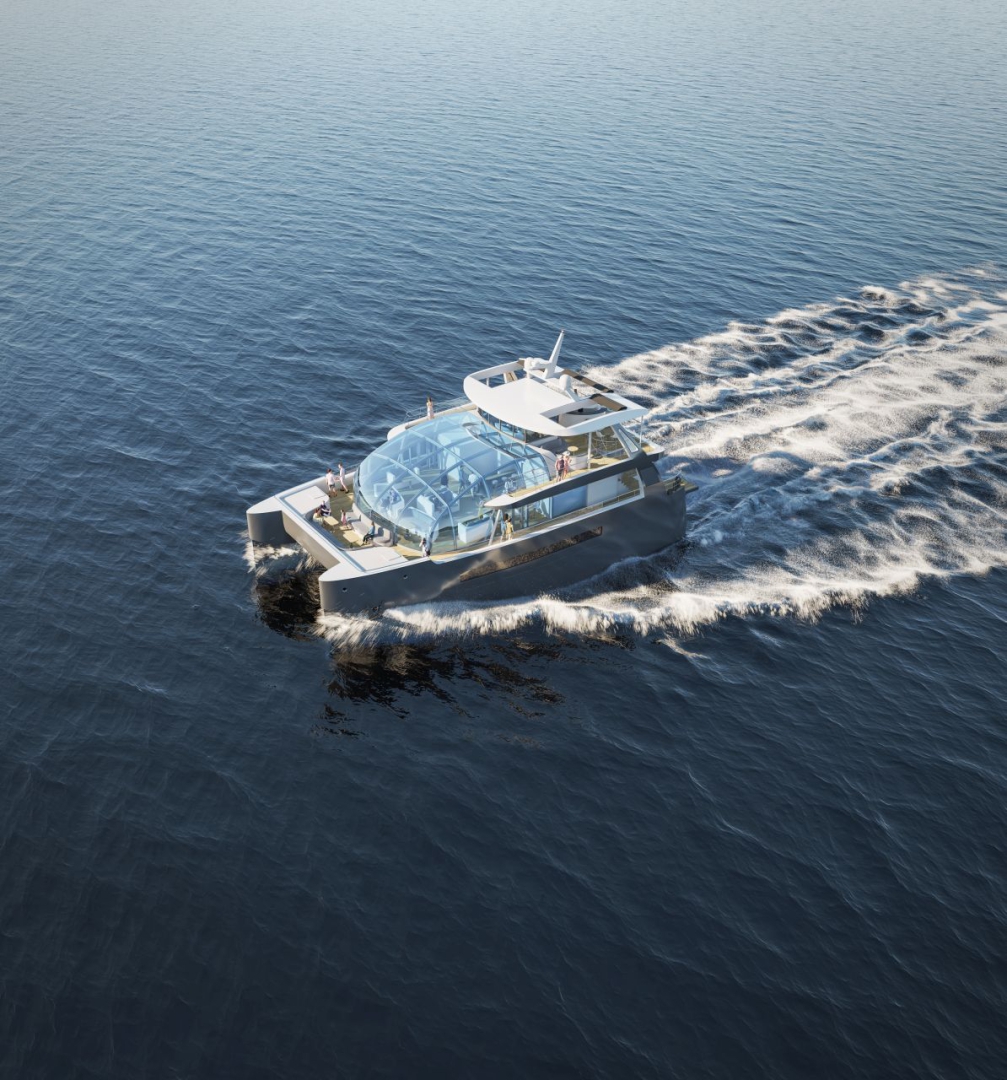 The catamaran full of technical novelties sheds new light on the possibilities of getting to know the flora and fauna of the underwater world. The creators of the modern and unique vessel have started the commercialization process. They promoted the project at international fairs in Dubai, Cannes and Abu Dhabi. What will be their next step?

The catamaran's uniqueness is due to the underwater windows, which Proteh GlassDeep offers in round and rectangular variants. The windows have been patented and are made with the use of specialized technology. The mineral glass from which they are made is characterized by high resistance to scratching and other adverse effects. 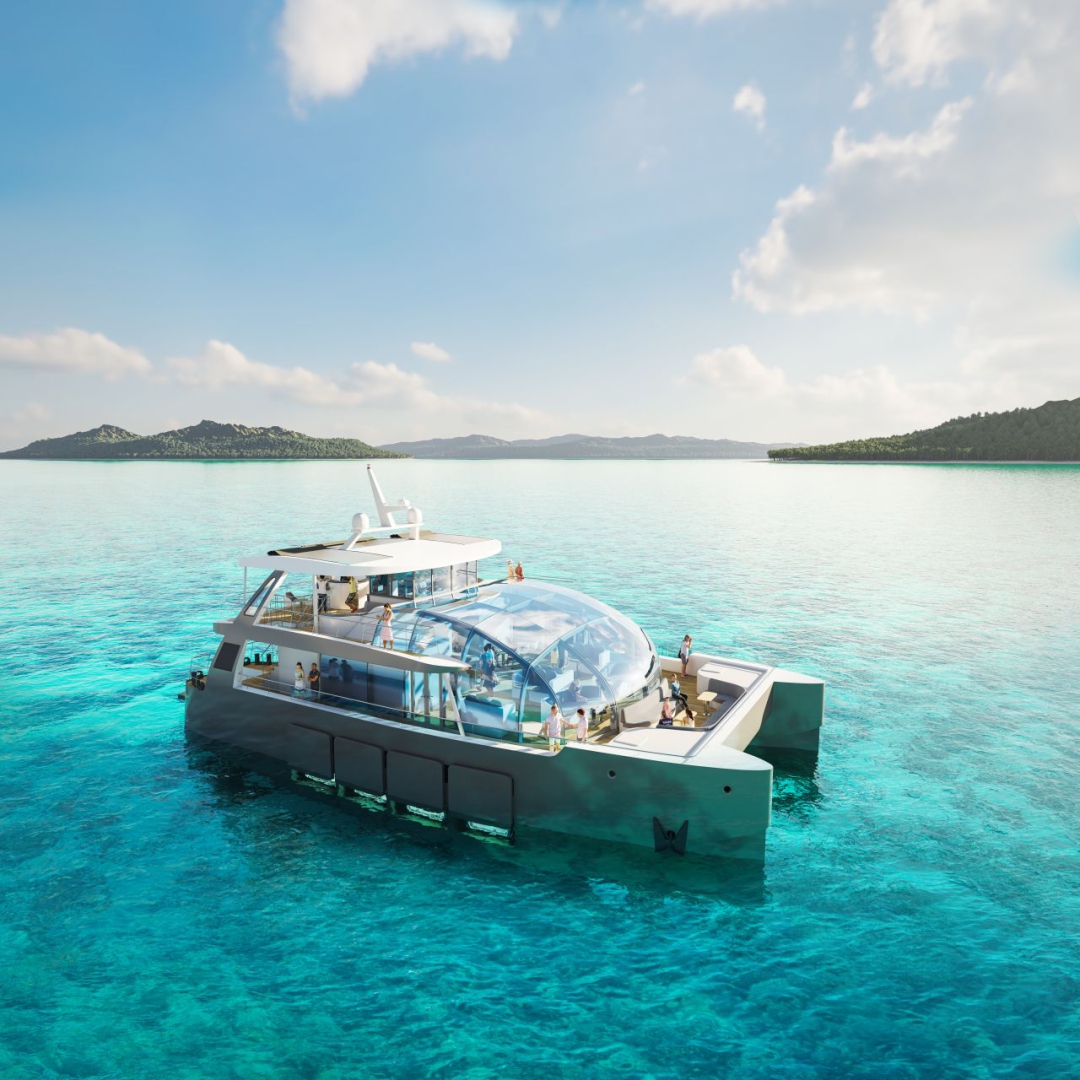 – The commercialization process is ahead of us, which was started by the event called Hotel Show in Dubai in the United Arab Emirates, where at the turn of May and June 2021 we presented our catamaran – says Krzysztof Koniuszaniec, development director at Proteh GlassDeep.

The Gdańsk company presented itself together with other Polish entrepreneurs. The event was organized by Pomerania Development Agency (Agencja Rozwoju Pomorza S.A.) as part of the Pomeranian Export Broker project.

– Our project was very popular at the hotel fairs. We feel satisfaction with the good reception, because the event gathered the tourism industry – Krzysztof Koniuszaniec is pleased. – We believe that our catamaran is perfectly adapted to the organization of trips exploring marine environment.

– We build relationships, and this is necessary in the commercialization of the vessel and winning contracts – he argues. – However, we operate in many directions. We also hosted our project in October at the Boat Show in Abu Dhabi. Here, in turn, you could meet those interested in luxury yachts and sea recreation.

And as he says, despite the fact that the event was not too big, it was extremely important for the industry and the company itself, as it was possible to maintain relations with partners from Dubai and continue further talks.

– We see the purpose of this window in vessels: yachts, boats and passenger ships, of which we and our partner, Safe shipyard, are able to build an entire section and deliver it to the shipyard where the vessel is being built – Krzysztof Koniuszaniec assures. – Windows are widely used and can be found in stationary facilities such as floating villas, diving centers, research facilities and others.

The window created by designers from Gdańsk is unique for many reasons.

– To make it, we used mineral glass instead of acrylic, which is currently used in various types of water observation windows. Our window is much more resistant and has greater resistance to abrasion. It is possible to clean it mechanically without fear that it will be scratched. Compared to acrylic windows available on the market, it saves a lot of time and resources. And what is key in the project - mineral glass creates much better conditions for observing the underwater world - lists Edward Gorlewicz, project manager from Proteh GlassDeep. 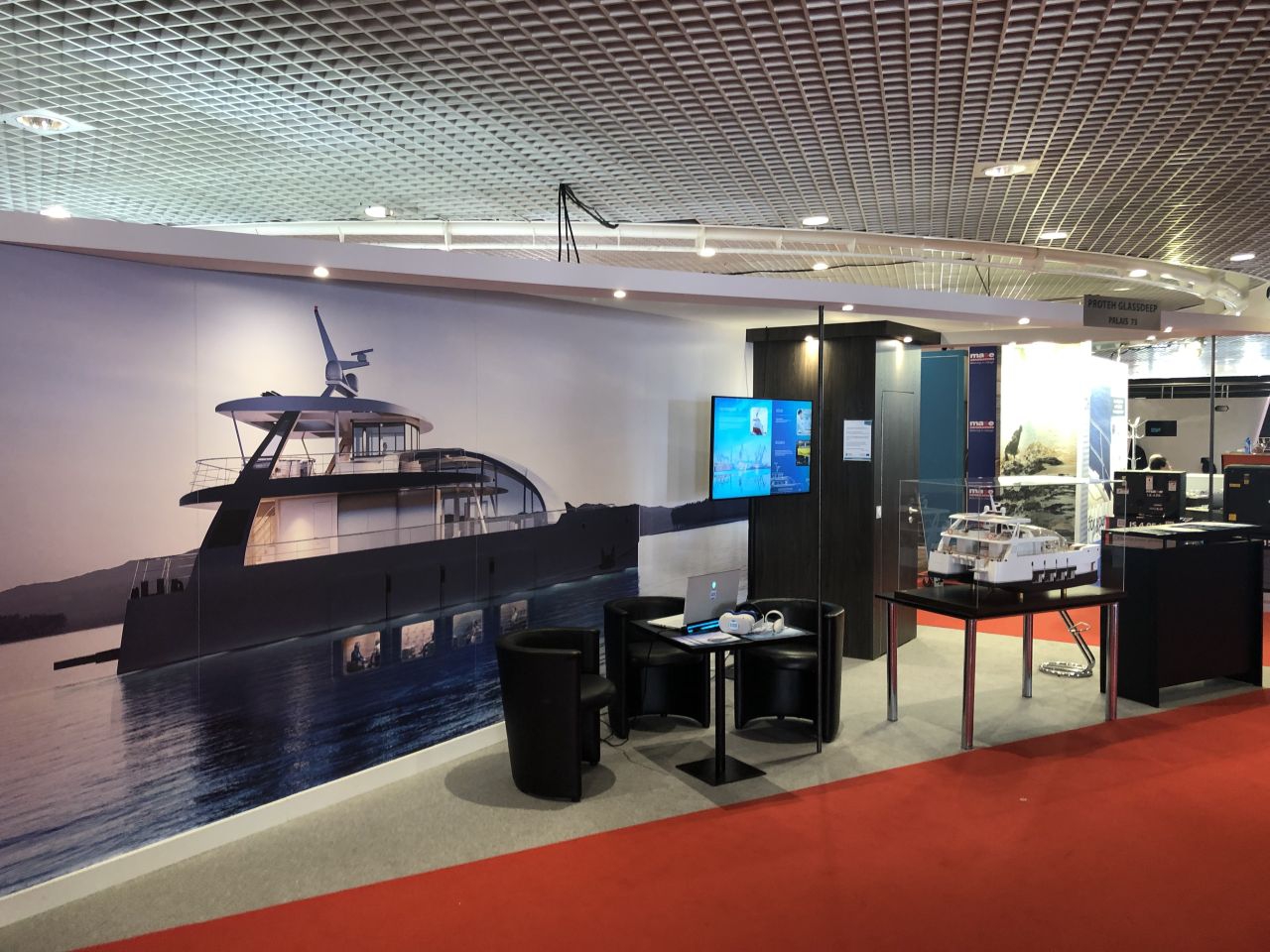 Experts also note the use of a cover that covers and protects the window via hydraulic systems.

- The problem with below the waterline windows is that maritime regulations do not really define them. We managed to solve this problem. We guarantee safety in the catamaran and other vessels, where we can install a section with this cover - emphasizes Eugeniusz Ziółkowski, president of Proteh GlassDeep.

While the ship is moving, the window is covered, thus it is not exposed to damage. The lid is opened when we want to see something.

On the way to certification

This important functionality has been tested as part of EU funding in cooperation with Centrum Techniki Okrętowej S.A.

In the case of windows, we apply for a certificate from DNV, which will allow us to admit the product to the market.

- The certification process is at such a stage that it requires only individual adjustment and approval of our window for a specific facility - adds Eugeniusz Ziółkowski, CEO of Proteh GlassDeep. - The rest of the work is already behind us.

Interestingly, the Proteh GlassDeep has its own underwater window testing chamber.

- The windows will have to be tested every time, so it is very beneficial for us. Our cooperation with the Gdańsk University of Technology is also important here. It turns out that in Europe there is no such type of stand for pressure testing of windows on a one-to-one scale in the dimensions we propose - emphasizes the president.

Authenticity is the key to success

The development director emphasizes that despite the fact that Proteh GlassDeep is classified as a micro-enterprise, it is distinguished by a rich background.

- The idea is important, but when we show something more, we make an impression on potential partners. We show, for example, that we cooperate with DNV on a research program, that we implement large projects with major design offices, such as StoGda Ship Design & Engineering Sp. z o.o. . Additionally, our partner is the Safe shipyard, which has a wide range of completed projects. At the same time, we have the ISO 9001 quality management system certificate for testing underwater windows. As a small company, we would not have existed without the support of our partners - notes Krzysztof Koniuszaniec. 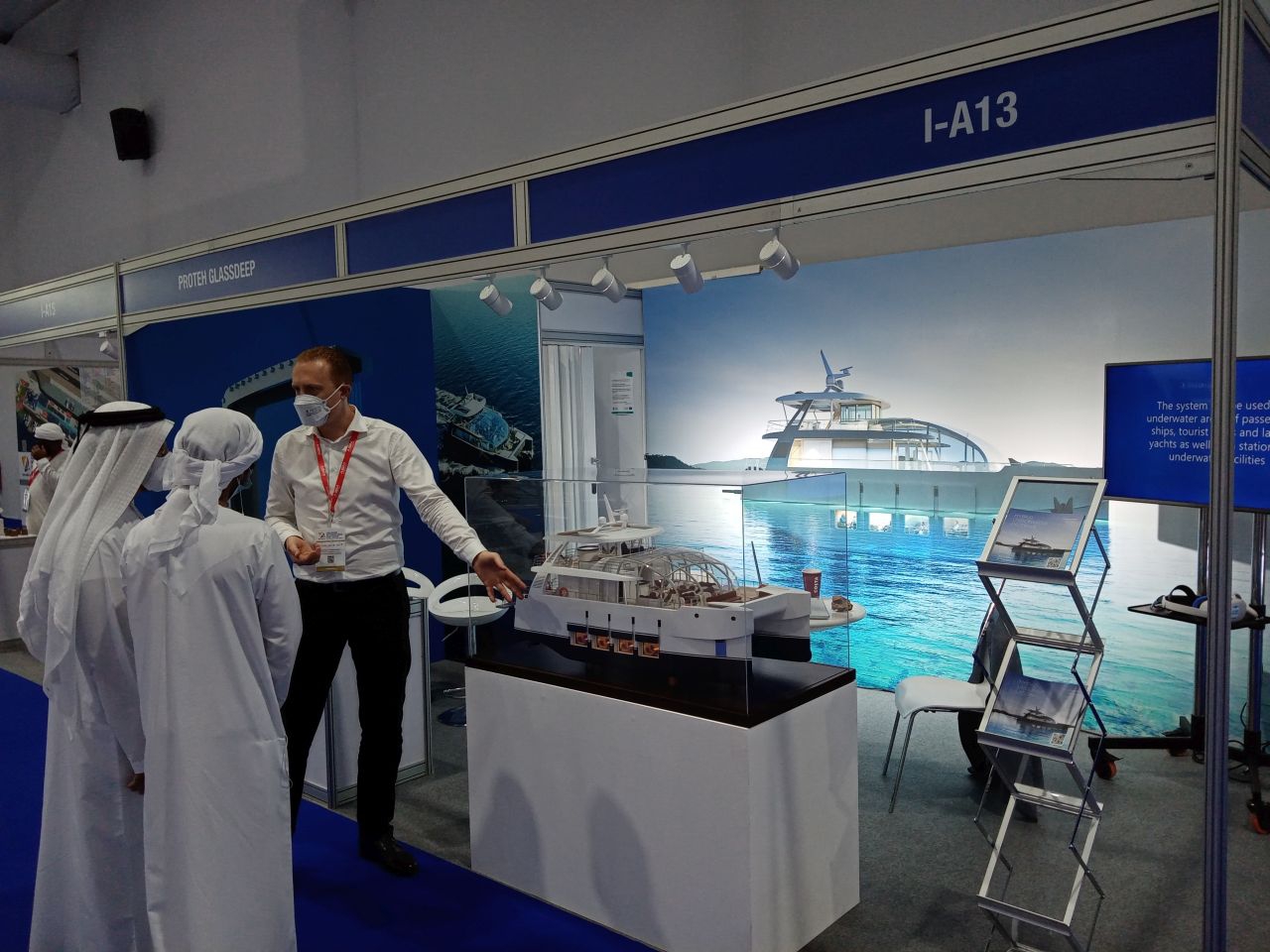 - It is impressive, for example, to test our windows in front of customers, instead of presenting visualizations - notes the president. - The videos that we show at the fair are met with great interest. We conducted the tests for three years precisely in order to present a product that cannot be obtained anywhere else in the world.

- Here, most of the questions concerned the window and cover, the talks concerned cooperation with French or Italian shipyards and offices, on the use of our elements in their products. The first inquiries are already there - enjoys Koniuszaniec.

President Ziółkowski notes that it is a ready response to the market needs that have been related to underwater observations in recent years.

- So far, various large yachts have smuggled in solutions that somehow circumvent the rules. We, on the other hand, took a specific path, we came almost to its end, where everything is legalized and safe - he says.

Engineers from Proteh GlassDeep also pay attention to the cooperation with the company Chronospace from Sopot, which developed a VR application for the underwater part of the catamaran.

- At the fairs we participated in, anyone willing could put on our glasses and "walk on the catamaran under the water, opening and closing the covers". The effect is almost better than reality. The VR application attracted a lot of interested people and contributes greatly to the promotion of our product - said Koniuszaniec.

- We want to appear on the Chinese market and show the product at fairs in Shenzhen or Shanghai. We are also thinking about participating in the Dubai and Singapore yacht fairs in March and April 2022. We are observing the market and we will try to promote our idea wherever possible - announce the representatives of Proteh Glass Deep.

Let us add that participation in international fairs is possible, among others, thanks to EU projects. Membership in the North-South Logistics and Transport Cluster and cooperation with the Pomeranian Development Agency increases the chance for international promotion of Proteh GlassDeep.

The cooperation in both cases is excellent and creates many opportunities for development, and additionally co-finances the most important activities up to 80%. We are the best example of the fact that it is worth using EU support - summarizes President Ziółkowski.