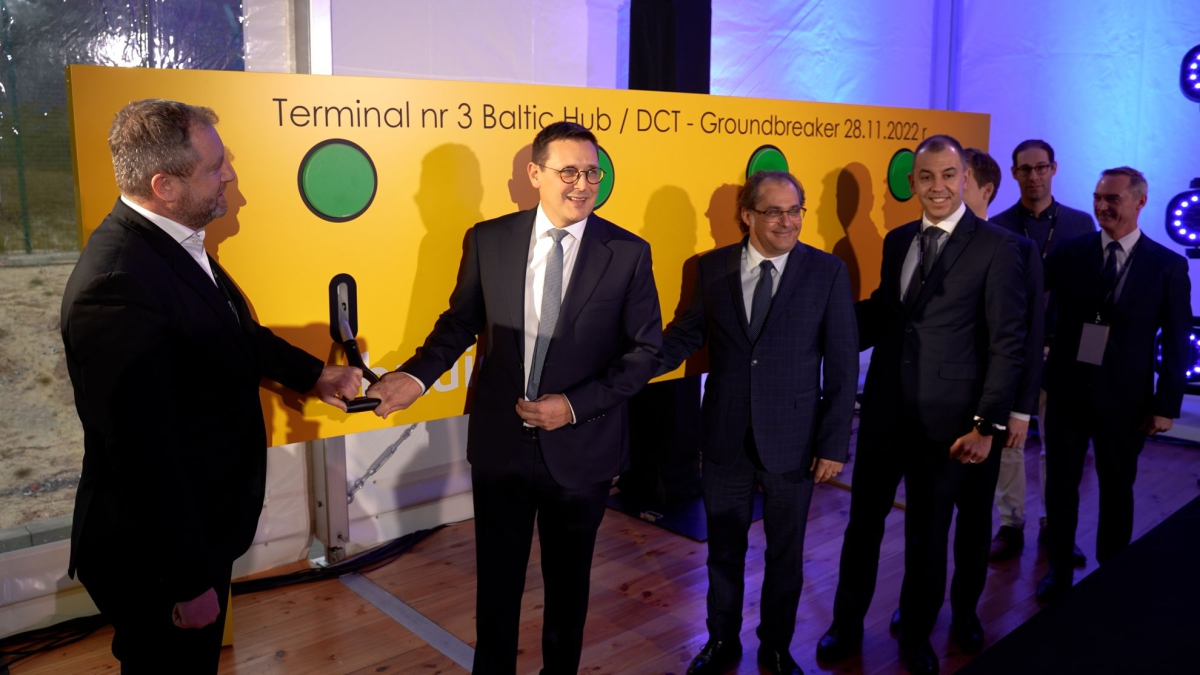 Seaports, Shipping, Logistics
Construction of the third container quay starts at the Baltic Hub in the Port of Gdańsk

Although the first work has already begun, construction of T3, the third deep-water quay at the Baltic Hub container terminal in the Port of Gdańsk, officially began on November 28, 2022.

Thanks to the construction of T3, the Baltic Hub (which until recently operated as DCT Gdańsk) will gain an additional 717 meters of quay adapted to the needs of the largest containerships. These will be deep-water berths, i.e. with a technical depth of 17.5 meters. The terminal will also gain a maneuvering and storage yard with an operational area of 36.5 hectares. The first phase of work is expected to be completed in mid-2024. That's when T3 will be opened for commercial operations. The entire project is expected to close in mid-2025.

A consortium of Budimex and DEME is responsible for the construction. The first phase of work will include the construction of a 36-hectare platform adjacent to Terminal 1, which will be built entirely offshore. Upon its completion in 2024, the Baltic Hub's handling capacity will increase by 1.5 million TEUs to a total of 4.5 million TEUs per year. The second phase is the construction of a 717-meter-long and 17.5-meter-deep quay wall, which will begin in early 2023 and be completed as planned in the second quarter of 2025.

„This is a massive investment for us – approximately 500 million euros. A lot of hard work to be done between now and sometime in the summer of 2024 to deliver this terminal," comments Charles Baker, CEO of Baltic Hub.

„The biggest change will be the introduction of rail-mounted gantry cranes on the yard instead of RTG's. They will be semi-automaic, so there''ll be no operators inside the machine, they will be operated remotely, from our office building," Baker describes. „Also it's another opportunity to have another berth for mega-vessels. If we think about the industry, when more and more big ships will come on the stream towards the end of 2023 and into 2024, there's really no way in the Polish ports to accomodate another third string Far East – Europe. We will able to provide that from middle of 2024," the Baltic Hub director enthuses.

„We are very happy about today's ceremony. The start of construction of the T3 terminal is crucial in the area of container transshipment development in Poland, but this is only halfway. There are further investments ahead of us, including the announced T5, so that we will eventually reach nearly 7.5 million TEUs. It is now a fact that we will become the largest port in the Baltic Sea in two years, and it should be recalled that just 10 years ago we did not exist in container handling," stresses Deputy Infrastructure Minister Marek Gróbarczyk.

Łukasz Greinke, president of the Port of Gdańsk Authority, emphasizes that during the planning of the investment, the synergy between the Baltic Hub and the port itself functioned in an appropriate way.


„On the Port Authority's side was the construction of a 2+2 access road and an additional two tracks for rail transport. Thus, the Baltic Hub terminal will be the best-connected terminal in Europe with such handling capacity. This will definitely strengthen the Baltic Hub and the Port of Gdańsk as number one when it comes to container handling in the Baltic, of course, it will bring us closer to number one in the Baltic in terms of overall handling weight, and it will definitely bring us closer to the top ten largest European ports," says Greinke.

Baltic Hub will be the largest, but the competition is not sleeping

Baltic Hub is currently the largest container terminal in Poland and number one in terms of container handling in the entire Baltic Sea. The terminal's infrastructure includes two deep-water quays with a total length of 1.3 kilometers, on which 14 STS cranes operate. All this adds up to an annual handling capacity of about 3 million TEUs. Upon completion of T3, this will increase by half to 4.5 million TEUs. It is worth noting that the goods handled at Baltic Hub feed not only the Polish market, but also the neighboring ones.

- This is really why we changed the name of the company to Baltic Hub – we felt that it reflected what we have become to some extend and certainly what we will become with delivery of terminal 3. We add also a fourth RMG to the rail terminal to increase its capacity, to accomodate service into the hinterland of Poland, but then beyond into Czech Republic, also Sloavakia, into Ukraine, maybe Belarus and other places in the future" explains Charles Baker.

Increasing the port's handling capacity is also a challenge for the access infrastructure on the land side - goods that arrive at the Baltic Hub on ships must somehow leave the port.

„I am convinced that we will manage this. Please note that investments are being made not only in port infrastructure, but also in access infrastructure. These are elements that allow for very efficient transportation and increasing the capacity of Polish ports," says Deputy Minister Gróbarczyk.


However, the Baltic Hub is not the only Polish container terminal. The GCT and BCT terminals located in the Port of Gdynia are thriving, and a deep-water container terminal in Świnoujście is also under construction. However, Deputy Minister Marek Gróbarczyk points out that once all the investments are completed, the total capacity of these terminals will reach 7-8 million TEUs, or roughly the capacity of one port in Hamburg.

„And yet we have the ambition to serve a larger part of Central and Eastern Europe,” Gróbarczyk notes. „So I think everyone will find their way in this market, although it is necessary to anticipate that there will be no cannibalization on rates, which is what we want to assess in terms of the state's involvement in making these investments," the Deputy Minister added.