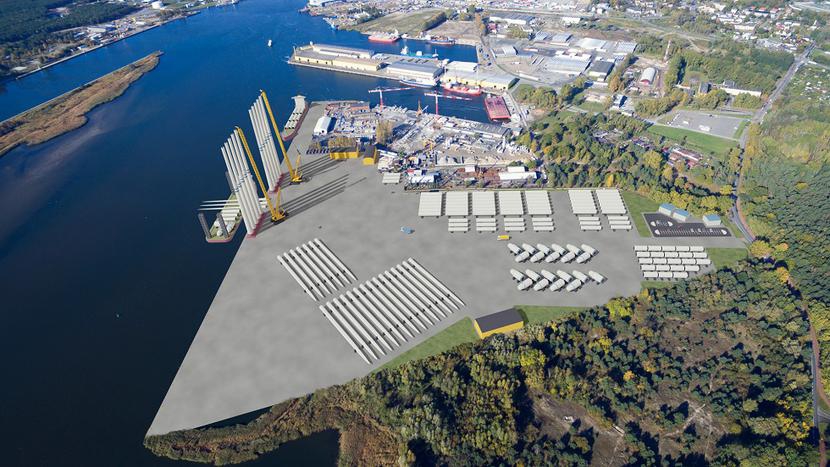 During a press conference convened at the Port of Szczecin on November 9, Deputy Minister Marek Gróbarczyk and Szczecin and Świnoujście Seaports Authority CEO Krzysztof Urbaś presented details of the offshore wind farm installation terminal in Świnoujście that Orlen will build.

The company signed an agreement on October 13 allowing PKN Orlen to build an installation port for offshore wind projects at the Port of Świnoujście. This will be the first port of its kind in the country, and its construction is expected to be a significant step allowing the realization of wind farms in the Polish economic zone in the Baltic Sea. During a November press conference, Deputy Infrastructure Minister Marek Gróbarczyk and Szczecin and Świnoujście Seaports Authority President Krzysztof Urbaś told more about the planned investment.

The meeting was opened by Deputy Infrastructure Minister Marek Gróbarczyk.

„It has been an extremely intense race over where the first offshore port will be built. The journey continued from the ports of Tri-City, Gdynia and Gdańsk, through Ustka, and ended in Świnoujście," he recalled.

The future shape of the installation port in Świnoujście was presented in more detail by President Krzysztof Urbaś. At first, he explained the necessity of such an investment in Poland in connection with extensive plans to build offshore wind farms. He then revealed that interest in offshore activities in Świnoujście was manifested from the very beginning by more than a dozen companies.

„Immediately upon learning that a plot of land in the Port of Świnoujście would be available, we were approached by various foreign and Polish entities wanting to cooperate. We spoke with more than a dozen companies. As soon as the opportunity to purchase a plot of land in Świnoujście became available, we exercised our right of first refusal, purchased it, and at express pace, over a period of nine months, a contract was signed, which is currently being implemented," President Urbaś recounted.

The chairman also said that Świnoujście has a very good location in relation to the wind farms planned for Słupsk Shoal.

„The distance from Świnoujście to the western part of Slupsk Shoal is less than from the Tri-City ports. This is just one of the many details that justify locating this project in the Port of Świnoujście” said CEO.

Krzysztof Urbaś pointed out that unlike the ports in Gdynia and Gdańsk, indicated as future locations for offshore ports, in Świnoujście there was no need to create large areas through inundation.

„In both Tri-City plans, a new pier had to be paved. The hydro works were of much greater time and capital commitment”, he explained. He added that there are plans to backfill a small part of the entire site - the current plot where Orlen's port will be built is 19 hectares, an additional 4 hectares will be created on sea. The entire port will thus cover 23 hectares.

As part of the arrangements, the Szczecin and Świnoujście Seaport Authority is to handle the implementation of the access infrastructure on the side of the Szczecin-Świnoujście waterway and the construction of the wharf. The land part of the investment, including the creation of appropriate storage yards, is on the side of Orlen, which is an investor in the project. According to Urbas, this configuration of tasks guarantees that the port will be completed in early 2025. According to him, the terminal will also be able to be used for other transshipments, both heavy and oversized pieces.