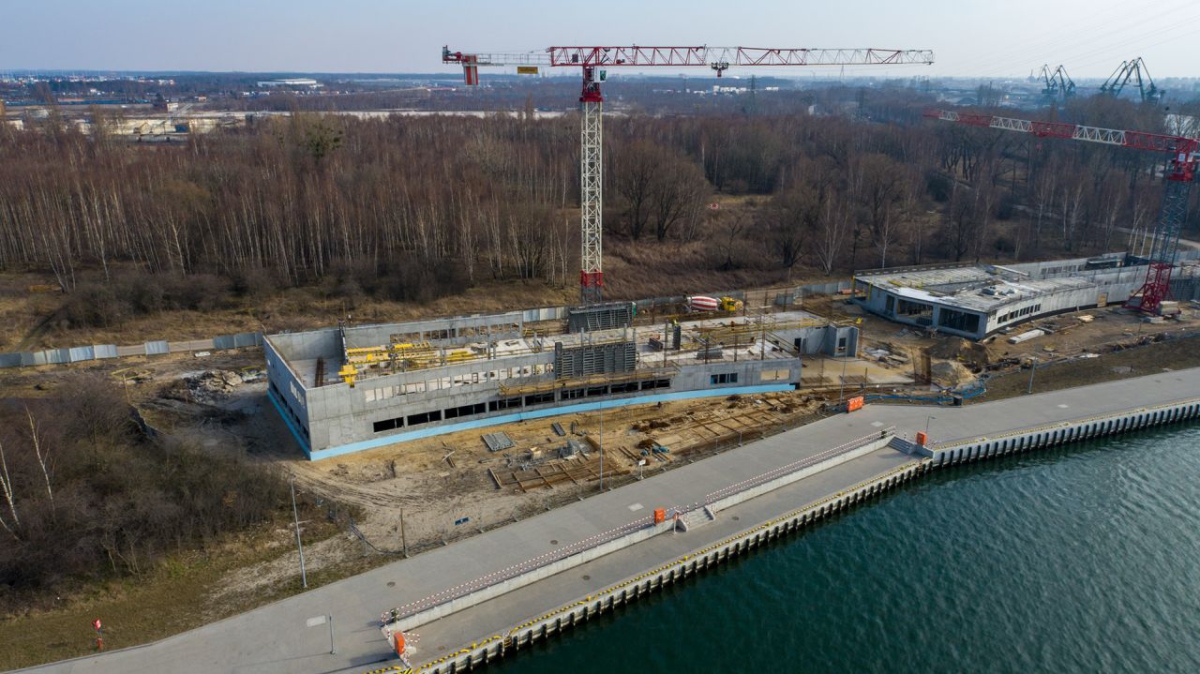 Maritime Education and Training, Crewing
Offshore Wind Energy Centre is growing in the Port of Gdansk. What is happening on the construction site? [VIDEO]

The PLN 50 million investment of the Offshore Wind Energy Centre of Gdynia Maritime University is scheduled to be ready in a year's time.

The construction of the Offshore Wind Energy Centre, an investment of Gdynia Maritime University in Gdañsk at Robert de Plelo Street, is progressing according to plan. Over the last four months (from December 2021 to March 2022), the contractor carried out work primarily related to the foundations of the facility, i.e. its reinforcement, concreting and laying insulation.

The backfilling between foundations was done together with compaction and works related to the construction of reinforced concrete walls were started. Sanitary, rain and underfloor installation has been laid. Ceilings over the first floor of the building were delivered and installed, and the collision with the telecommunications network was removed.


Works connected with laying the external sanitary network were started and reinforced concrete works of walls in the part of the first floor and the 1st floor of the building for the 1st stage were continued.


- I would like the emerging Offshore Wind Energy Centre to become a real research and education center for the offshore industry. It will be the new seat of the Maritime Institute which participates in 8 out of 10 environmental studies for the purposes of location projects of future wind farms - emphasised Prof. Adam Weintrit, the rector of Gdynia Maritime University during the signing of the agreement on the establishment of new offshore studies, whose main partner is PGE Baltica,


What will the Centre be in practice? The construction consists of two two-storey buildings connected by a link at the level of the second floor.


- It will house other university units related to the development of the offshore industry - emphasized Rector Weintrit.


And as he added, the construction is already at the stage of the second floor and before the summer holiday the topping out ceremony is planned, with the opening scheduled for next year.


- The Offshore Wind Energy Centre under construction will be the seat of certified laboratories, whose operation is a part of the process of preparing and implementing investments in offshore wind energy - explains the professor.

In his speech on the occasion of the School Day 2021, the Rector emphasized the role of the university in supporting the offshore wind energy sector.


- We want to participate in creating a local Polish supply chain for the offshore industry. We are doing everything to make the Centre the nucleus of a larger organism, the "Polish Offshore Valley" - said Prof. Weintrit during the ceremonial session of the Senate of the University of Gdańsk.

The value of the investment together with the equipment is estimated at ca. PLN 50 million. The works are planned to be completed by March 2023.